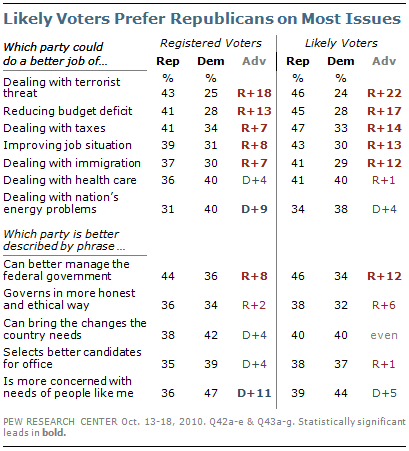 The public offers mixed views of which party can better handle major issues. The Republican Party is favored on terrorism, immigration and the deficit, while the Democrats lead on energy and health care. The two parties are rated about even on improving the job situation.

However, the GOP’s advantage on issues increases among registered voters, particularly those voters considered most likely to vote on Nov. 2.

While favoring the Republican Party on many issues, likely voters are more divided in their evaluations of the parties’ traits and characteristics. Republicans are seen as the party better able to manage the federal government by a 46% to 34% margin. The two parties are rated about evenly on honest and ethical governance, selecting better candidates for office, bringing needed change, and concern for average people. 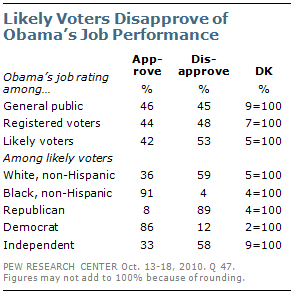 The pattern is similar when it comes to opinions about how Obama is handling his job as president. As was the case in September, the overall public is divided in evaluations in Obama’s job performance: 46% approve while 45% disapprove. Among likely voters, 53% disapprove while 42% approve.

Obama’s job rating is highly negative among independent likely voters – just a third (33%) approve of his job performance while 58% disapprove. Among all independents – including non-voters – Obama’s rating is somewhat less negative (40% approve, 47% disapprove).