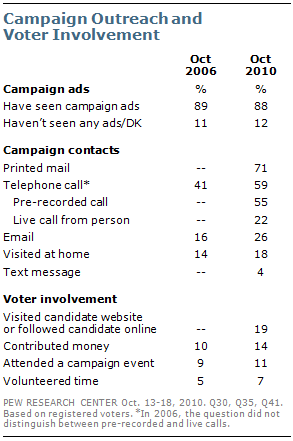 About seven-in-ten (71%) voters have received mail from candidates or political groups this year. A majority (59%) has received a pre-recorded or live phone call, up from 41% who reported that candidates contacted them over the phone in 2006. Far more report receiving pre-recorded calls this year than calls from a person (55% vs. 22%); in 2006, the survey did not distinguish between live and pre-recorded calls.

More voters report donating money than did so during the last midterm cycle; 14% now say they have contributed money to a candidate or campaign this year, up slightly from 10% in 2006. About one-in-ten voters (11%) have attended a campaign event, similar to the 9% who had in 2006. Only 7% of voters have volunteered their time to help one of the candidates or campaigns. In 2010, 19% of voters say they have visited a candidate’s website or followed a candidate through email, Facebook or Twitter. 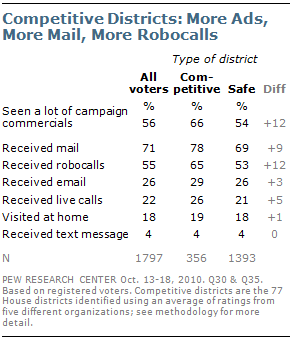 Most See Candidates Attacking, Not Explaining 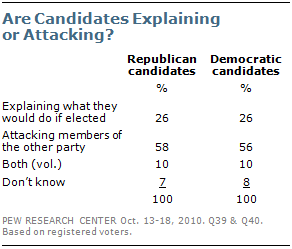 Among the overwhelming majority of voters who report having seen or heard campaign commercials this year, 78% say they have seen about the same number of commercials for Republicans and Democrats. Large majorities across all partisan groups say this. 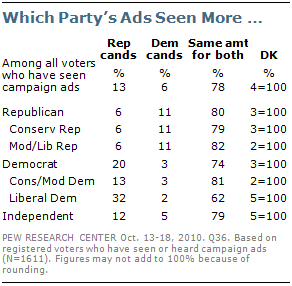 Important to Know Who Pays for Campaign Ads?

Amidst controversy about the transparency of funding for campaign advertising this year, voters are divided over the importance of knowing where ad money comes from. Roughly half (49%) say it is important to them to know who paid for the campaign commercials they see and hear, while the other half (50%) say this doesn’t matter much to them. And most voters (55%) who have seen ads this year say it is generally easy to tell who paid for them, while only 32% say it is generally difficult. 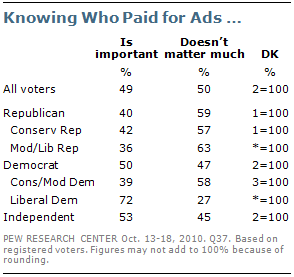 Partisans also differ somewhat in their impressions of how easy it is to tell who paid for campaign advertising, with 62% of Republicans, 54% of independents and 50% of Democrats who have seen or heard ads saying this is easy to determine. Nearly half (46%) of liberal Democrats say it is difficult to tell who is paying for ads this year, substantially 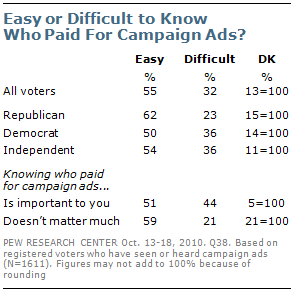 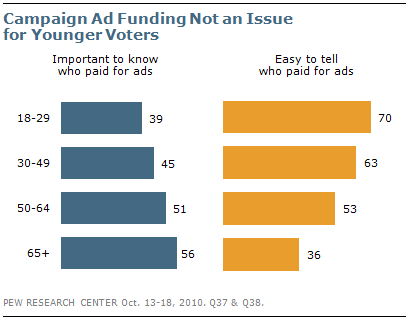 Young voters are far less likely than older voters to have been contacted by candidates and political groups this year. The age differences are particularly large on receiving printed mail and telephone calls (both pre-recorded and personal calls). About four-in-ten (42%) 18 to 29 year old voters have received printed mail, compared with nearly twice as many voters 65 and older (81%).

And while 37% of young voters received a phone call from a candidate or political group, 59% of 30 to 49 year olds, 68% of 50 to 64 year olds and 71% of voters 65 and older have been contacted by phone. This gap is much larger than it was in 2006 when 32% of voters under 30 were contacted by phone, compared with 45% of those 65 and older. Even when it comes to receiving email, fewer young people say they have been contacted by candidates and political groups this year than those 30 and older. In 2006, there were virtually no age differences in email contacts. 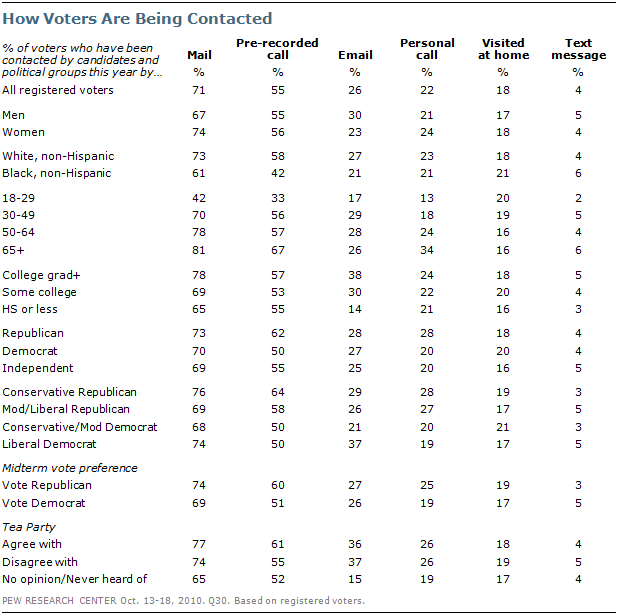 Republicans are receiving more pre-recorded and personal telephone calls than are Democrats or independents. About six-in-ten (62%) Republican voters have gotten a robocall from a candidate or political group this year, compared with 50% of Democratic voters and 55% of independent voters. And more Republicans (28%) than Democrats (20%) and independents (20%) have received a personal phone call. There are virtually no partisan differences in contacts by mail, email, text messages or home visits.

While most hang up on robocalls, there is little evidence that these recorded messages are a major irritant. Most of those who hang up say the calls are simply a minor annoyance, while only a few say the automated calls make them angry.

While the high hang-up rate suggests that automated phone calls are less effective, the payoff to campaigns is in the broader reach of these inexpensive calls. The current figures suggest that about as many voters have listened to robocalls this year as have listened to live calls. Overall, 17% of voters have received one or more robocalls this year and say they usually listen. This is almost identical to the 16% who have received a live call this year and say they usually listen. 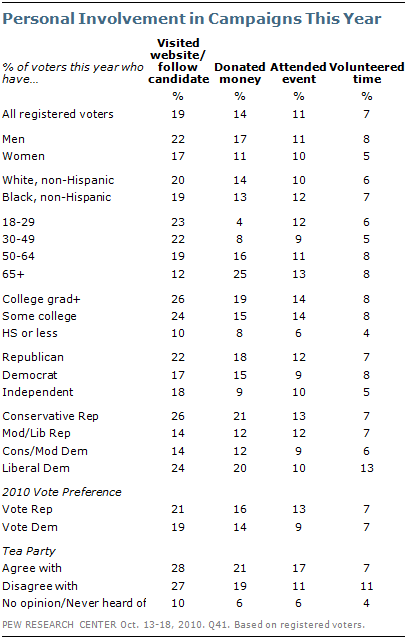 As in all elections, voluntary campaign activity is far less widespread than campaign outreach. While roughly eight-in-ten voters have seen one or more campaign ads, seven-in-ten have gotten campaign mail, and six-in-ten have been called on the phone, just 14% say they have donated money to a campaign, 11% have attended a campaign event, and 7% have volunteered their time to a candidate or campaign.

And while it does not necessarily imply a commitment of time or money, the internet also provides an easy way for some voters to learn more about candidates and campaigns. Roughly two-in-ten voters (19%) have visited a candidate’s website or followed a candidate through email, Facebook or Twitter.

Two of these behaviors – making campaign contributions and following candidates online, differ widely by age. While a quarter (25%) of voters 65 and over have made a campaign donation this year, just 4% of voters under 30 have done the same. By contrast, those under 30 are twice as likely as those 65 and older to have visited a campaign website or followed a candidate online (23% vs. 12%). There are no significant differences among age groups when it comes to attending events or volunteering time.

Voters who have attended college are more likely than those who have not to have visited a candidate’s websites, donated money, attended campaign events and volunteered their time to help one of the candidates or campaigns. 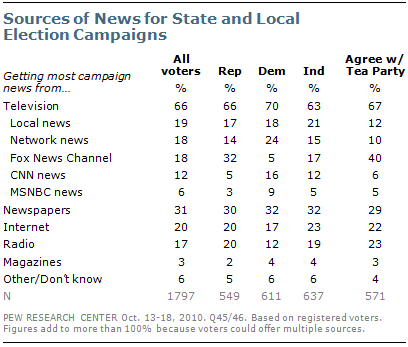 Television is the dominant news source for Republican, Democratic and independent voters. But where voters go for TV news varies substantially by party. Republicans and those who agree with the Tea Party are far more likely to turn to Fox News Channel while Democrats are more likely to turn to CNN and network news. (For more on party, ideology and news consumption see “Americans Spending More Time Following the News,” Sept. 12, 2010).

Politics in the Pulpit 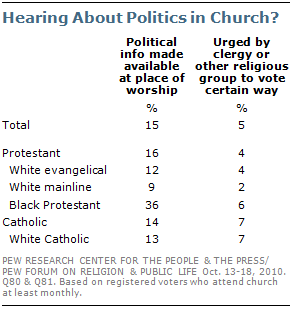 Among voters who attend religious services at least once or twice a month, 15% say information on the political parties or candidates has been made available at their place of worship. This is similar to the number of voters who, following the 2008 campaign, said that political information had been provided at their place of worship (15%), but lower than the percentage who said this after the 2004 election (27%). Among religious groups, encountering political information at church is most common among black Protestants (36%).

Few regular attenders (5%) say that their clergy or other religious groups have urged them to vote in a particular way, and this does not vary significantly across religious groups.