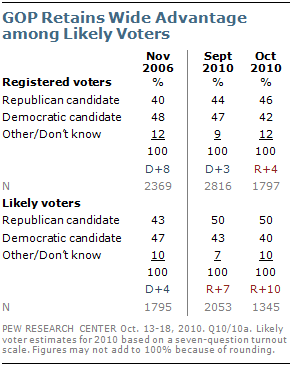 As has been the case all year, voters’ preferences in the midterm elections remain divided. But for the first time, slightly more registered voters say they will vote for the Republican candidate in their district, or lean Republican, than say they will support a Democrat or lean Democratic (46% vs. 42%). In early September, 44% said they planned to vote for a Republican and 47% for a Democrat.

Where the Race Stands 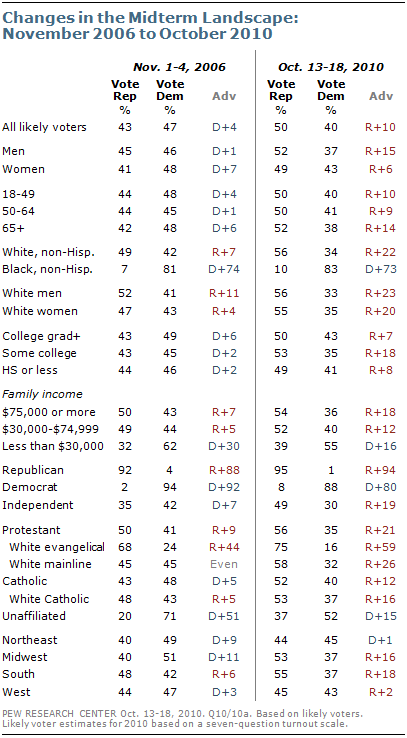 The GOP now holds significant leads among likely voters in many demographic groups. Republicans lead by 15 points among men (52% to 37%). In the closing days of the 2006 campaign, men were evenly divided. 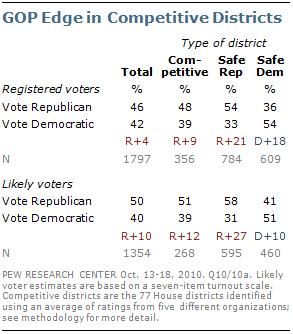 The midterm race in this year’s most competitive districts mirrors the race nationally: In the 77 House districts identified as competitive by a consensus of political analysts, 51% of likely voters favor the Republican candidate and 39% favor the Democratic candidate. 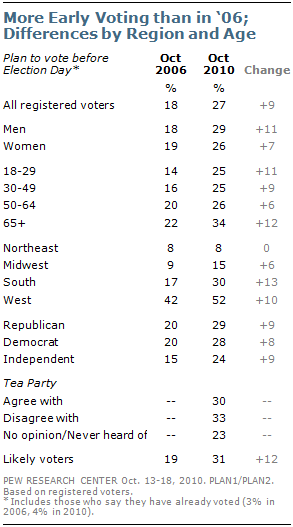 Reflecting the variation in voting rules in different states, early voting intentions vary by region. Roughly half (52%) of registered voters living in the West plan to vote early or have already done so. Three-in-ten voters (30%) in the South say they will or have already voted early. Just 15% in the Midwest intend to vote early, as do only 8% in the Northeast.

Older Americans are more likely to vote early: Roughly a third (34%) of voters 65 and older intend to cast their vote before Nov. 2, compared with about a quarter of younger voters. There are no substantial differences by gender or party. 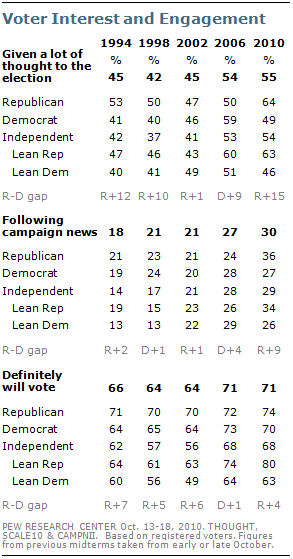 Overall levels of voter interest match or exceed the high levels recorded at a similar point in the 2006 election campaign. Unlike 2006, when interest among Democratic voters was on par with or exceeded Republican interest, Republicans today outpace the Democrats. In fact, Republicans are more interested and attentive to the campaign than at comparable points in the past five midterm election cycles. And when asked to compare their own level of enthusiasm with previous congressional elections, 56% of Republicans say they are more enthused, compared with just 41% of Democrats.

Nearly two-thirds (64%) of Republican registered voters report that they have given a lot of thought to the elections, 36% say they are following news about the campaign very closely, and 74% say they definitely will vote.

Interest in the campaign among Democratic voters is as high as in recent midterms – with the exception of 2006 – but they still lag behind GOP voters. About half of Democrats (49%) say they have given a lot of thought to the election, which is higher than in 1994 or 1998 and about the same as in 2002. It is 10 points lower than at the same time four years ago, when 59% of Democratic voters were giving a lot of thought to the election. As many Democrats say they a
re following campaign news very closely as did so four years ago, and attention is greater now than in 1994 and 2002. 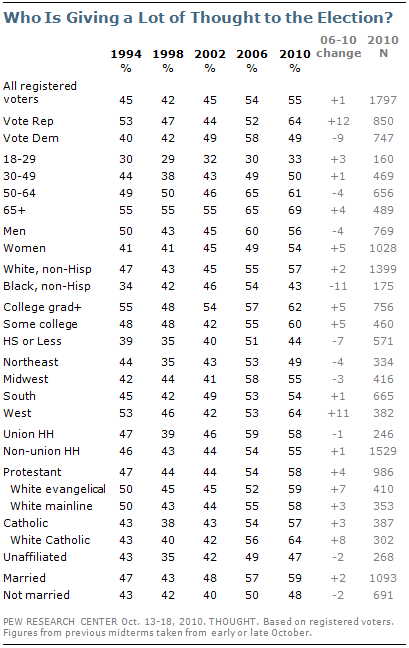 Fewer than half (45%) of young voters say they definitely will vote, 23 percentage points lower than among any other age group.

The survey finds that voters in the West are giving significantly more thought to the election this year than in 2006, perhaps driven by the large number of competitive statewide races going on in states like California, Washington, Oregon, Colorado and Nevada. Nearly two-thirds of Western voters (64%) say they have given a lot of thought to the election, which is at least 9 points higher than in any other region.

Interest in the campaign among Democratic voters has increased this fall, with the percentage saying they have given a lot of thought to the campaign growing from 41% last month to 49% today. The proportion of Democrats who say they are following campaign news very closely has grown substantially since June – from 16% to 27% currently. And in three of four previous congressional elections polled by Pew Research, Democratic interest increased from October to the final weekend before the election. The only exception was 2006, when Democratic interest was already at a relatively high level.

Four years ago, anti-incumbent sentiment also was extensive. But at a comparable point in that campaign, fewer voters (26%) said they would not like to see their own representative reelected and opposed the reelection of most members of Congress (49%).

Many Prefer “New Faces” over Experience 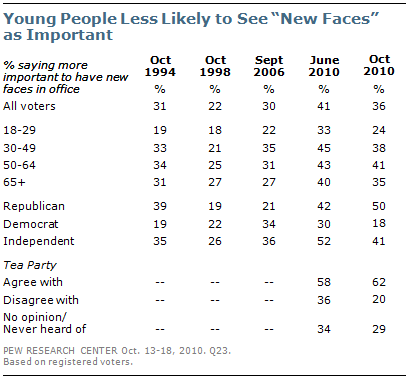 At the same time, young voters are less likely than their older counterparts to say they value new faces over experience (24% of voters younger than 30 express this view, the lowest percentage of any age group).

Party Control of Congress a Factor for Voters 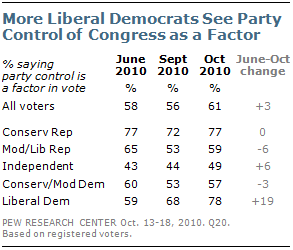 Among all voters, 27% say they consider their vote as being for Obama, 30% think of their vote as a vote against Obama, while 39% say Obama is not a factor. These views are largely unchanged from September. 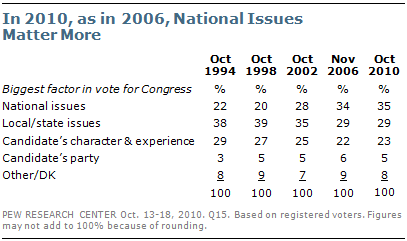 The proportion of voters rating national issues as the biggest factor in their vote is about the same as in 2006 – but is higher than in prior midterms dating to 1994. Currently, 35% say national issues will be the biggest factor in their vote; 29% say local and state issues; 23% the candidate’s character and experience; and 5% the candidate’s political party. 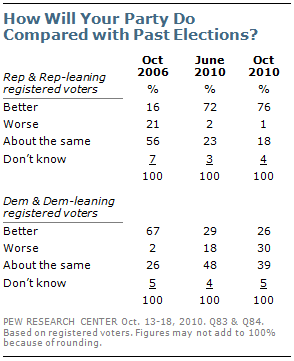 About three-quarters (76%) of Republican and Republican-leaning registered voters expect their party to do better in this year’s Congressional elections than it has in recent elections. Republicans have expressed confidence since June of this year, when 72% expected better results for the Republican Party in the 2010 midterm.