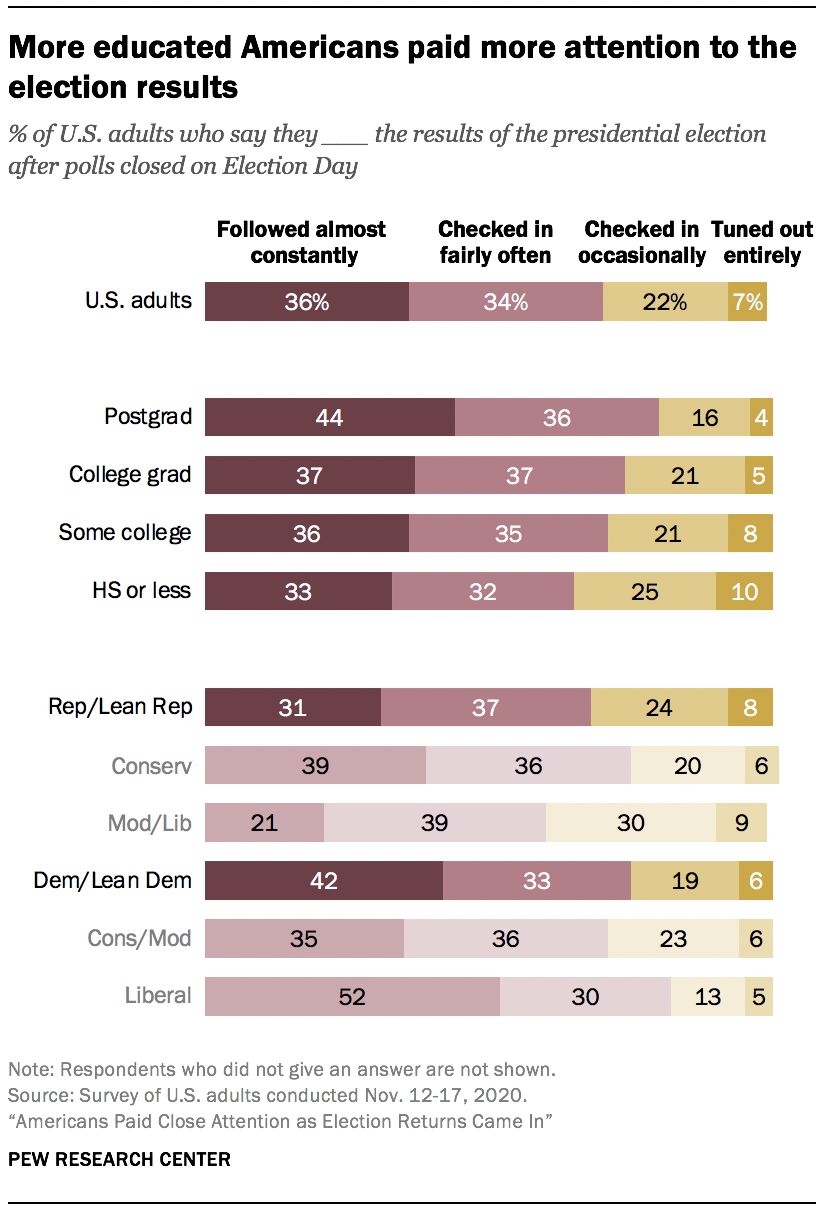 About one-third of U.S. adults (36%) say they followed the results of the presidential election almost constantly after polls closed on Election Day, and a similar portion (34%) say they did so fairly often. About two-in-ten Americans (22%) say they checked in occasionally, while far fewer (7%) say they tuned the election night results out entirely.

Consistent with other findings about attention to political and election news, more educated adults (particularly those with postgraduate degrees) say they followed the incoming results almost constantly (44%) than do those who have a college degree (37%), some college experience (36%) or a high school diploma or less (33%).

Overall, a greater share of Democrats and independents who lean toward the Democratic Party (42%) than Republicans and Republican-leaning independents (31%) say they followed returns for the presidential election almost constantly after polls closed. But, larger differences in attention emerge when political ideology is layered in. Liberal Democrats were by far the most engaged after polls closed on Election Day: About half (52%) say they were following almost constantly, while nearly another three-in-ten checked in fairly often. Conservative and moderate Democrats were less engaged, with 35% saying they followed almost constantly.

Attention to the presidential election results also varies greatly based on which news platform Americans reported relying on most for election results. Cable TV had the most engaged audience, while those relying on social media were the least engaged. 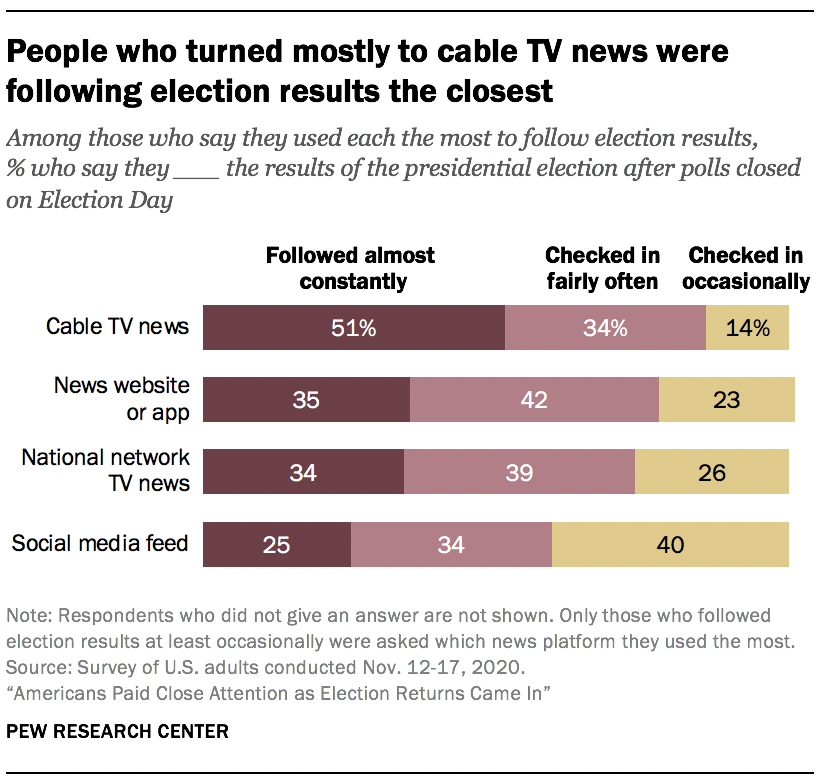 About half of Americans who say they mostly turned to cable TV news (such as CNN, Fox News or MSNBC) for coverage of the election results followed them very closely: 51% say they followed almost constantly, while another 34% say they checked in fairly often. The share of cable TV watchers constantly following is at least 16 percentage points higher than the share saying the same in all the other groups analyzed here.

On the other hand, those who say their social media feeds were their main way of following the results report being less glued to their screens. Four-in-ten of this social media group say they checked in only occasionally, 14 points higher than the share saying this among the next highest group analyzed (26% of those who used national network TV news say this).

Attention to election night results among those who relied most on news websites or apps and those who relied on national network TV news fell between cable and social media, with 35% and 34%, respectively, saying they followed almost constantly. 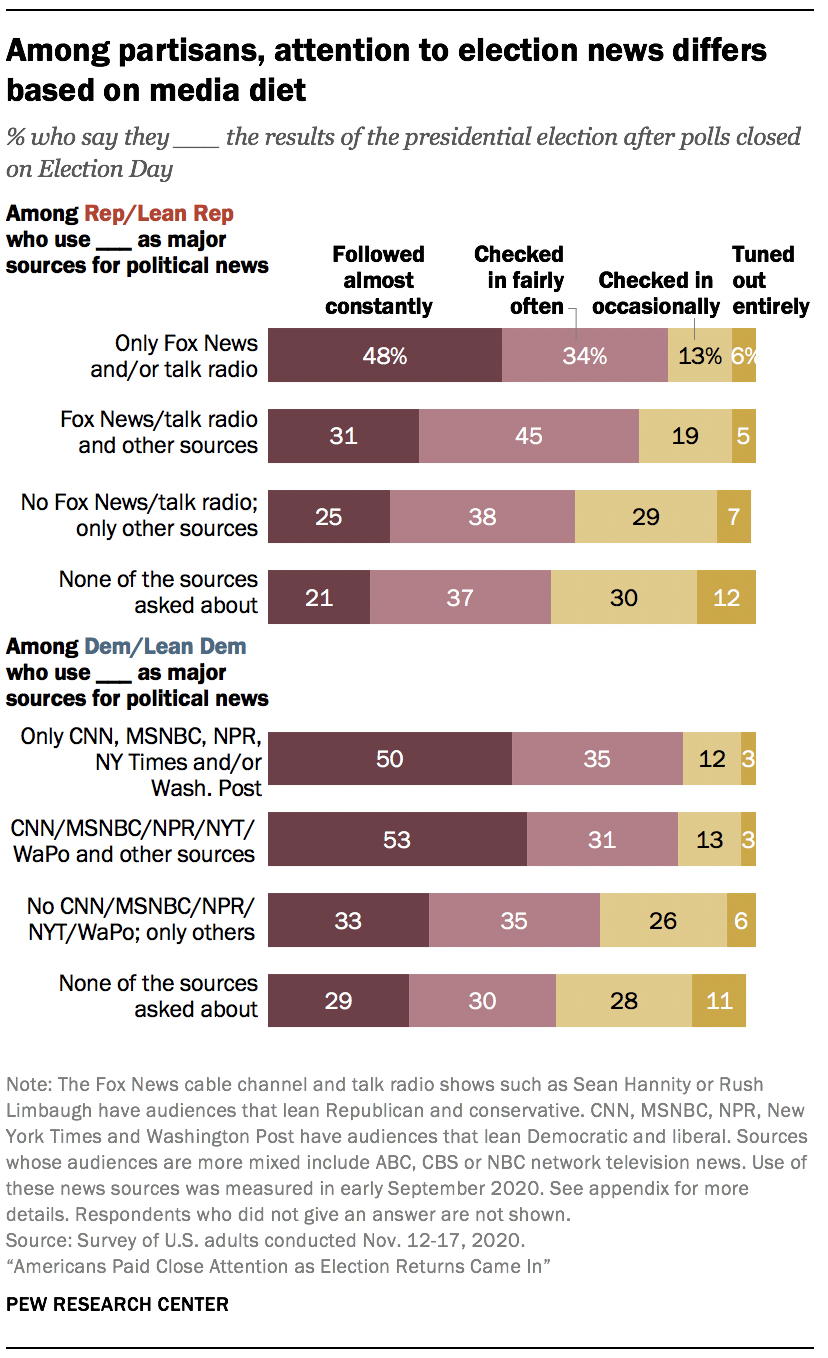 In addition to the pathways relied on most to follow election returns, the Americans News Pathways project previously gathered data on the specific sources turned to most for political and election news. Among eight sources asked about, Republicans and Democrats (including leaners) who rely only on news sources with like-minded audiences are the most likely to say they followed the results almost constantly.