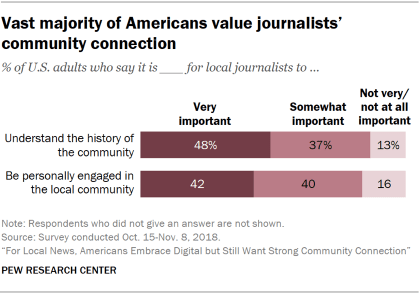 At the heart of many current efforts to strengthen public trust and engagement in local news systems is an emphasis on journalists’ connection with their audiences.

The data show there is public support for efforts like these. Americans place high value on a close connection to the community, though there is less consensus on whether the local media meet this bar. 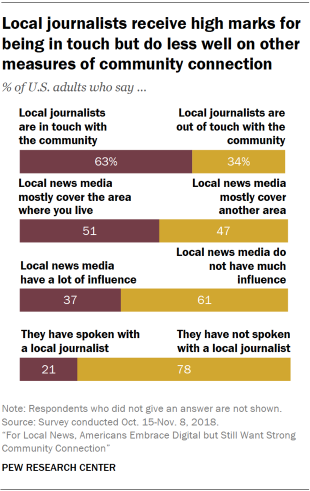 While Americans largely agree on the importance of the local media’s connection to their community, there is less sense that journalists meet this standard.

A majority of U.S. adults (63%) say local journalists are generally in touch with their community rather than out of touch (34%). But there is much less of a sense that their local media are truly influential. Overall, 61% say their local media do not have much influence on the community, compared with 37% who say they do.

And, if one core element of community connection is “locally sourced” reporting, much of the country feels they are missing out. About half of Americans (51%) say their local news media mostly cover the area where they live, while 47% say they cover another area such as a nearby city.

There can be many contributing factors to this disparity: Budget cuts and financial constraints, consolidation and buyouts, and the sprawling distribution of the U.S. population could all play a role. Indeed, rural residents are more likely to say local news does not cover their area: A majority of self-described rural Americans (57%) say so, compared with about a third of self-described urban residents (35%) and about half of self-described suburban residents (48%). Whatever the cause, a large share of Americans across the country don’t feel their area is fully represented in local news media’s coverage. 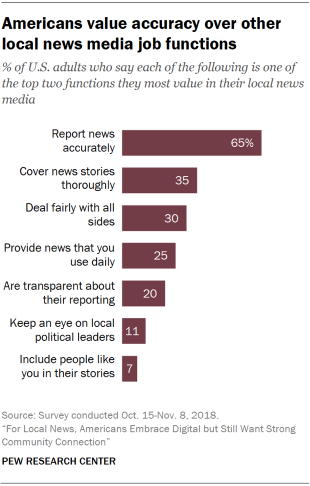 When asked about the reporting itself, Americans clearly place the highest value on accuracy. Accurate reporting topped the list of seven core news media functions, named by about two-thirds (65%) as one of the two functions they value most in local media. Next on the list, though fairly far behind, are thoroughness (35%) and fairness (30%). Fewer see the most or second-most value in providing news you can use daily (25%), transparency (20%), serving as a watchdog on political leaders (11%) or inclusion (7%).

Finally, even in calling for journalists to be a close part of the community, the public feels that certain ethical lines are important for journalists to maintain. A solid majority (61%) says journalists should not share their own personal views about local issues, far more than the 36% who say they should.

Next: 3. Americans give fairly high marks to their local news media, especially when journalists are seen as connected to the community
← Prev Page
Page1Page2You are reading page3Page4Page5Page6Page7Page8Page9Page10Page11
Next Page →

For Local News, Americans Embrace Digital but Still Want Strong Community Connection 1. Nearly as many Americans prefer to get their local news online as prefer the TV set
2. The public places high value on journalists’ connection to the community; fewer say they experience it
Americans offer a more mixed assessment of journalists’ actual connection to their communityIn news coverage, Americans value accuracy, thoroughness and fairness
3. Americans give fairly high marks to their local news media, especially when journalists are seen as connected to the community 4. Most Americans think their local news media are doing well financially; few help to support it 5. The importance of local news topics often does not align with how easily the public can find information about them 6. Overall, social media plays a moderate role in local news Part Two: Taking a closer look at local news attitudes and behaviors within individual local areas Part Three: The characteristics of communities show some effect on local news habits Acknowledgments Methodology