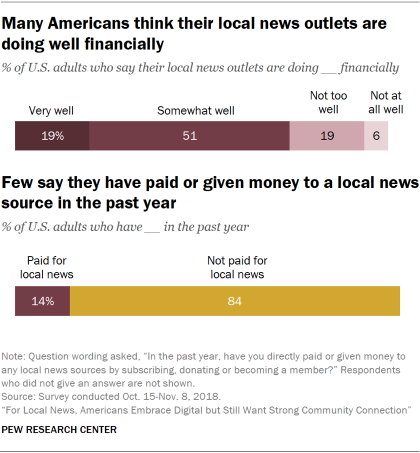 One ongoing challenge for the news industry has been finding ways to finance their work in a digital era where traditional forms of revenue have crumbled. As shown by Pew Research Center’s annual assessment of the state of the news media, newspaper industry advertising (made up primarily of local papers) has declined 67% since its peak in 2005, with staff layoffs still occurring. Local TV revenue, while more resilient, also saw some decline – 17% between 2005 and 2017, with greater fluctuation between on- and off-year election cycles.

That sense seems to be reflected in their own contributions, or lack thereof. When asked if they had paid or given money in the past year to any local news source – by either subscribing, donating or becoming a member – 84% of Americans said no; 14% said yes. 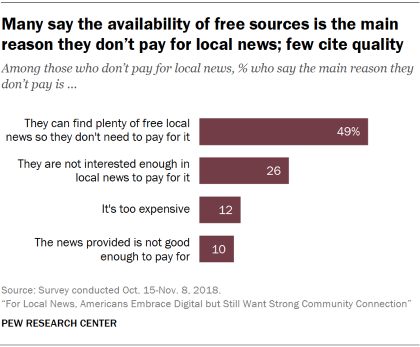 And, despite some attempts by news organizations to attach various types of paywalls to their content, the main reason Americans don’t pay is the availability of free local news alternatives (49%). The reason ranking second, though cited by far fewer, is lack of interest in local news (26%), followed by concerns about the expense (12%) and the quality of news (10%). 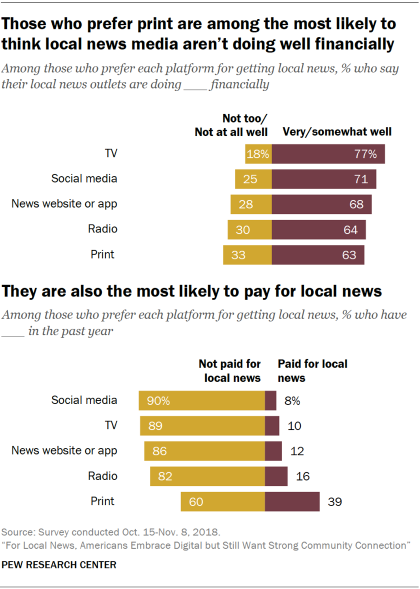 Consumers who are more tied to a print news product are more likely than most others to sense financial strain on the local news industry, and they also are the most likely to offset it some by paying for local news themselves.

Next: 5. The importance of local news topics often does not align with how easily the public can find information about them
← Prev Page
Page1Page2Page3Page4You are reading page5Page6Page7Page8Page9Page10Page11
Next Page →

For Local News, Americans Embrace Digital but Still Want Strong Community Connection 1. Nearly as many Americans prefer to get their local news online as prefer the TV set 2. The public places high value on journalists’ connection to the community; fewer say they experience it 3. Americans give fairly high marks to their local news media, especially when journalists are seen as connected to the community
4. Most Americans think their local news media are doing well financially; few help to support it
Print-oriented local news consumers more aware of financial challenges and more likely to pay for local news
5. The importance of local news topics often does not align with how easily the public can find information about them 6. Overall, social media plays a moderate role in local news Part Two: Taking a closer look at local news attitudes and behaviors within individual local areas Part Three: The characteristics of communities show some effect on local news habits Acknowledgments Methodology