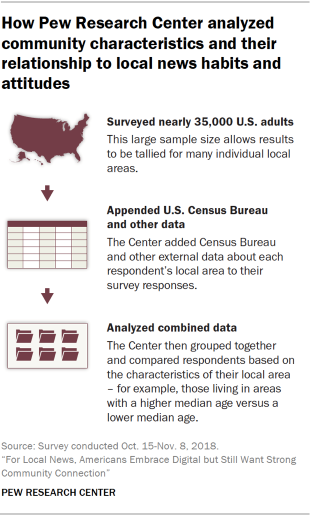 Any local news system is inherently embedded within a particular community – and characteristics of communities vary extensively, according to data from the U.S. Census Bureau and other sources. Some have a larger share of young adults, driving down the median age, while others have a sizable senior population, driving the median up. Some have more racial or ethnic diversity than others, with substantial black or Hispanic populations. The share of people still living in homes without broadband internet access is larger in certain communities than others. And some areas have many lower-income households while others carry a great deal of wealth.

To explore how these differences relate to news habits, researchers grouped individuals based on the characteristics of their local area by adding Census Bureau data and other measures to the survey responses.

How Pew Research Center grouped communities based on their characteristics

Researchers appended data from the U.S. Census Bureau and other sources to the individual responses and then classified individuals by the characteristics of their local area. Five specific characteristics were analyzed:

The geographic unit of measurement used here is what the U.S. federal government calls core-based statistical areas, or CBSAs. These are defined as a central city and the counties that are tied to it, such as the Los Angeles CBSA, which also includes Orange County to the south as well as Long Beach and Anaheim.

For the analysis, individuals are grouped together based the characteristics of their local area. For instance, researchers grouped together everyone who lived in CBSAs where voter turnout was above 64.434%. The criteria used to define the higher and lower group are given in the detailed tables below.

In making these groups, the goal was to examine communities that really stood out. As such, divisions were made so that the higher and lower groups are relatively small – roughly the top or bottom 10% of the U.S. population that live in a CBSA – while the middle group is large, often making up around eight-in-ten living in a CBSA. Given that the effects of community characteristics are largely indirect – as discussed below – this gives us the best chance at detecting their influence by minimizing the variation within each group.

The analysis finds that habits of and attitudes toward the local news media vary moderately based on these community characteristics. The differences may not be as dramatic or pervasive as one might think, due in large part to the natural mix of people that exists in any local area. Still, certain clear tendencies emerge.

Below are key findings of each community type examined, as well as an examination of differences by racial and ethnic makeup. The full data can be found in detailed tables that follow.

Broadband: Differences between residents living in areas with higher and lower access to broadband internet are very similar to differences by median household income, in part because of the high degree of crossover between the groups: 78% of those in communities with more broadband access are also in higher-income communities, and 65% in communities with less access are also in lower-income communities. As such, those in areas with less broadband access are more likely to prefer the TV as a pathway to local news and to primarily use mobile devices to access local news online. They also place more importance on crime, changing prices, jobs and schools. 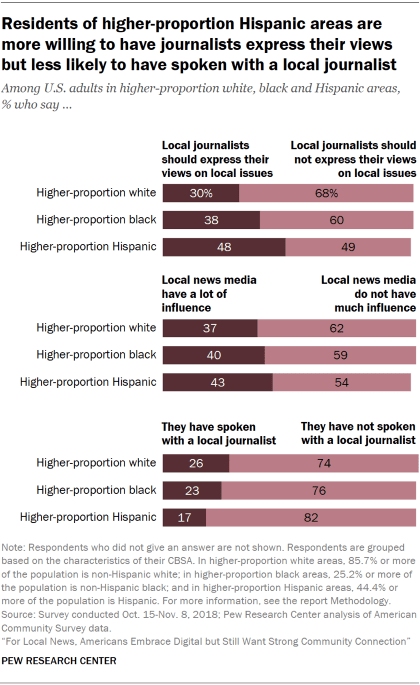 U.S. adults living in local areas with a higher proportion of Hispanic residents are much more likely to say that journalists should express their views on local issues (48%) than those in either higher-proportion white (30%) or black (38%) areas. They are also somewhat more likely to think the media have a lot of influence in their local communities (43%) than those in higher-share white (37%) areas.

Americans living in communities with particularly high shares of Hispanics and of blacks are more likely to say most key local news topics are important for their daily lives than those in higher-proportion white areas. This includes crime news, changing prices and jobs. This difference also comes through in the total number of topics deemed to have daily importance. Americans living in higher-proportion Hispanic areas are the most likely to say five or more topics are important to follow for daily life (32%), followed by those in higher-share black areas (28%). Both outpace individuals in higher-share white areas (16%).

There are also some slight differences across community types in reliance on social media for news. Residents of higher-proportion Hispanic and black areas are more likely to see social media sites as the most important way to keep up with local news (18% and 17%, respectively, compared with 12% of those living in higher-proportion white areas). 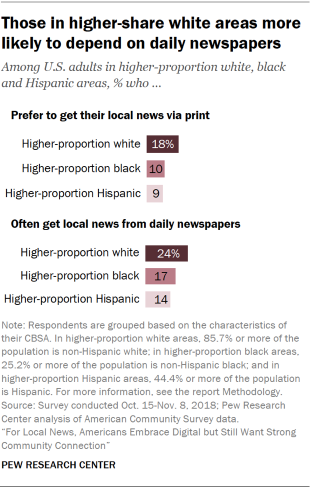 In looking at these results, larger differences often exist between different types of people – the younger and older, adults with higher and lower incomes, etc. – than between different types of communities. For example, those in higher-proportion Hispanic communities were 18 percentage points more likely than those in higher-proportion white areas to say local journalists should express their opinions (48% vs. 30%). But Hispanic individuals – regardless of whether they live in a higher-proportion Hispanic area or elsewhere – were 27 points more likely to say this than white individuals.

This is to be expected. Communities are never as homogenous as the demographic group that researchers compile to profile differences in the population at large. Even in low-broadband communities, for instance, between a quarter and 57% of households still have high-speed broadband internet, and so an analysis of these low-broadband communities will still include a sizable portion of people that do have high-speed internet.

The influence of community characteristics on local news behaviors and attitudes is indirect: These characteristics influence something else that, in turn, influences these attitudes and behaviors. For example, local TV stations serving a community where fewer homes have broadband might put fewer resources into their digital offerings, resulting in less online local news in that community, and thus less interest among local residents in getting news online. In contrast, individuals who don’t have broadband internet might simply be unable to access news video or graphic-intensive online content, directly depressing their online news use. As such, community influences should be less than individual influences – but still very much present.

The tables below show how residents of different types of communities responded to selected questions from the survey. 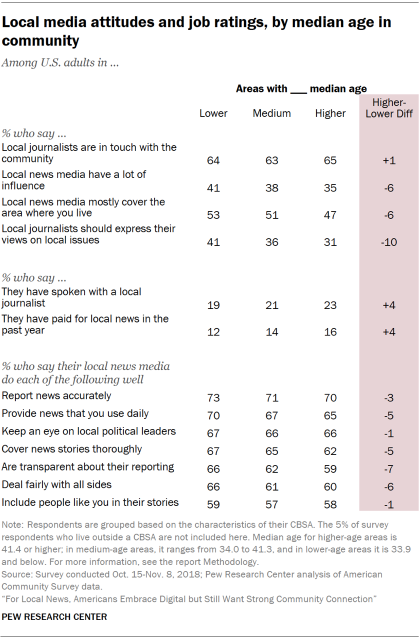 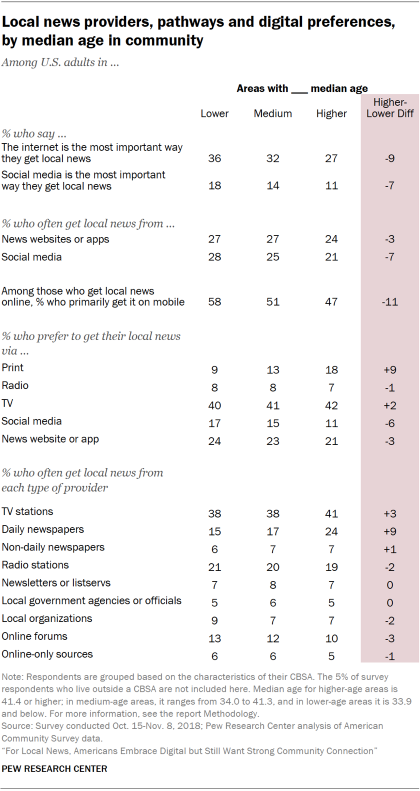 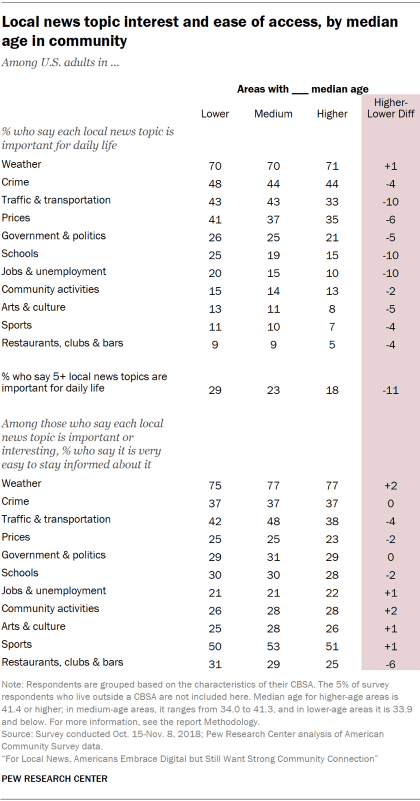 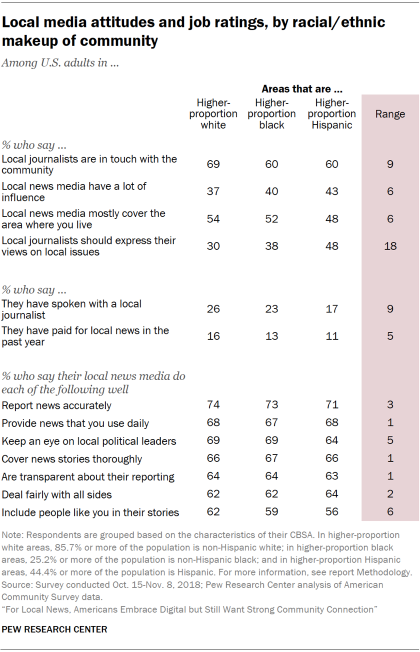 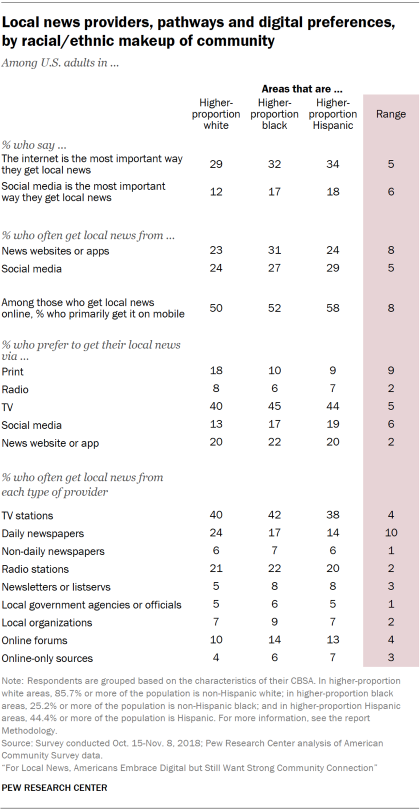 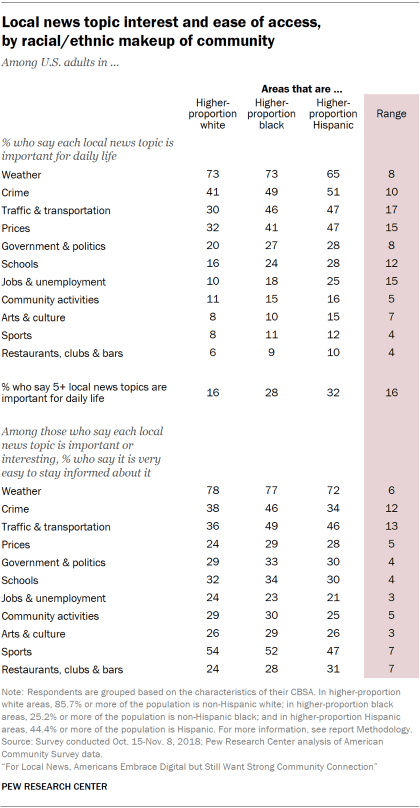 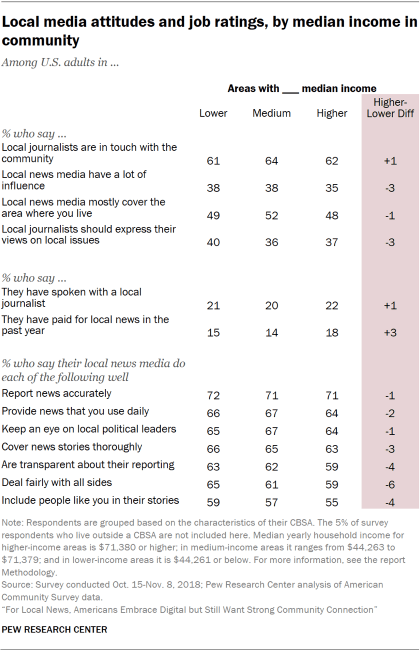 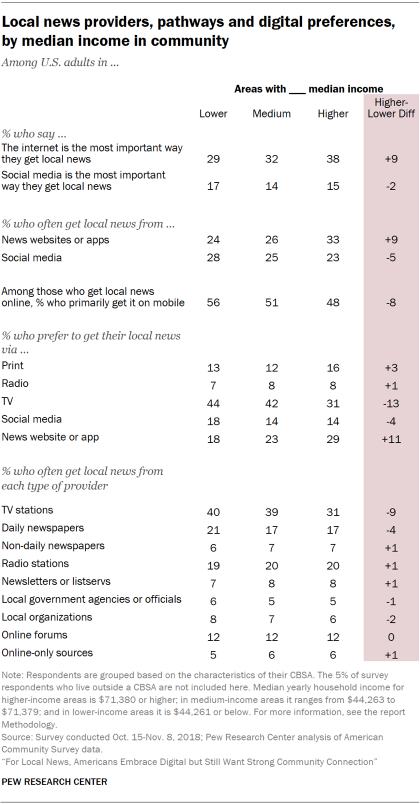 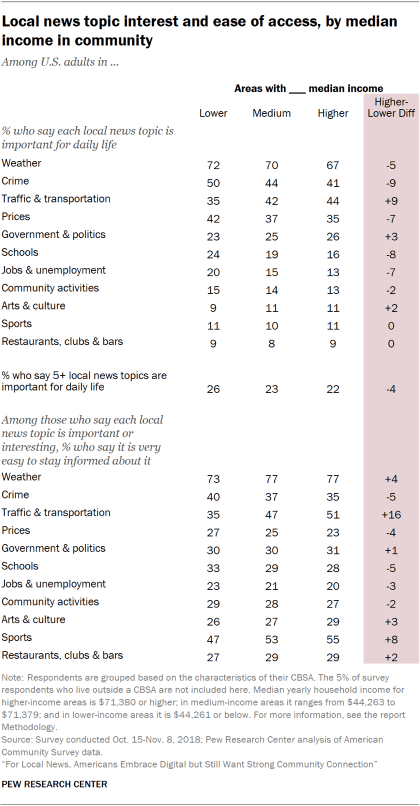 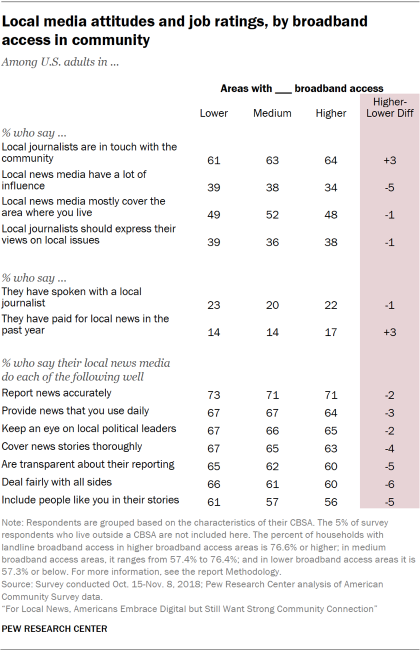 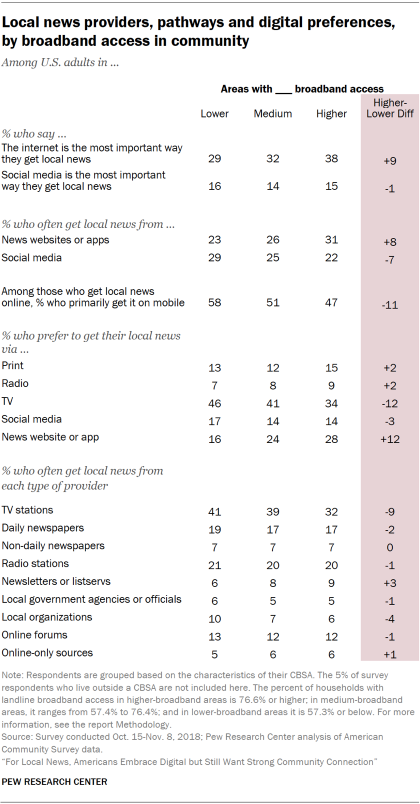 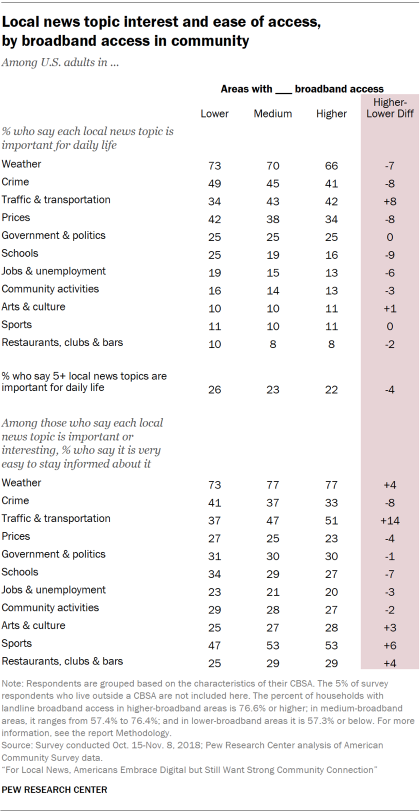 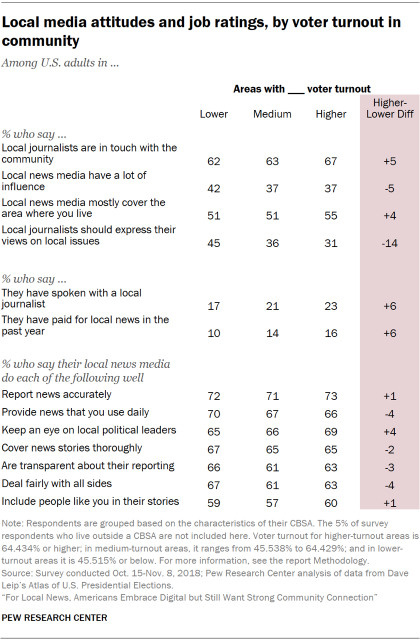 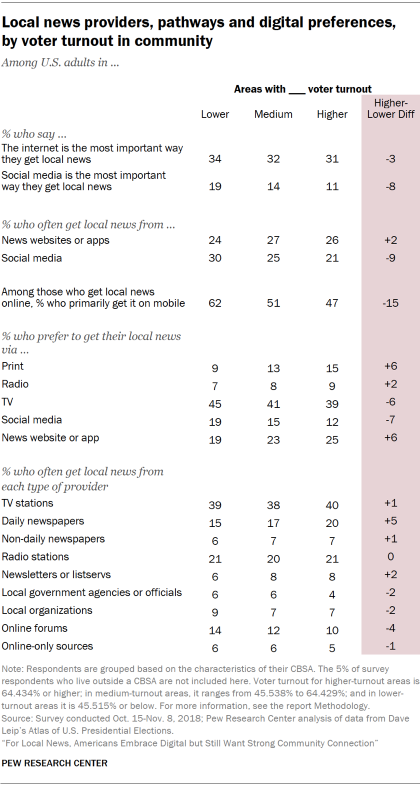 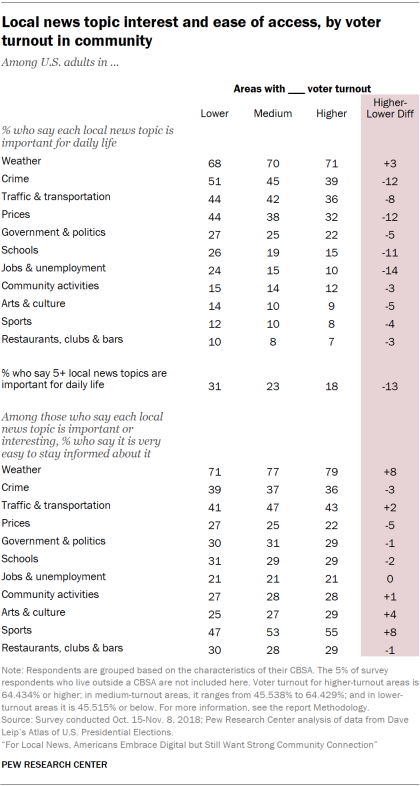 Next: Acknowledgments
← Prev Page
Page1Page2Page3Page4Page5Page6Page7Page8You are reading page9Page10Page11
Next Page →

For Local News, Americans Embrace Digital but Still Want Strong Community Connection 1. Nearly as many Americans prefer to get their local news online as prefer the TV set 2. The public places high value on journalists’ connection to the community; fewer say they experience it 3. Americans give fairly high marks to their local news media, especially when journalists are seen as connected to the community 4. Most Americans think their local news media are doing well financially; few help to support it 5. The importance of local news topics often does not align with how easily the public can find information about them 6. Overall, social media plays a moderate role in local news Part Two: Taking a closer look at local news attitudes and behaviors within individual local areas
Part Three: The characteristics of communities show some effect on local news habits
Those in higher-proportion Hispanic communities more accepting of journalists’ personal views on issues; those in higher-proportion black and Hispanic communities place more importance on social media for local newsDetailed tables showing data by community characteristics
Acknowledgments Methodology