While few Americans have high levels of trust in professional news organizations, a close look at Americans’ expectations of and relationship with the news media offers a more nuanced view. Overall, most Americans expect the news they get will be largely accurate. Yet, most also believe that news organizations will try to cover up their mistakes rather than admit to them. And while majorities of both parties believe the information they receive will be accurate, positive sentiments toward the news media are stronger among Democrats than Republicans, as seen in previous findings. 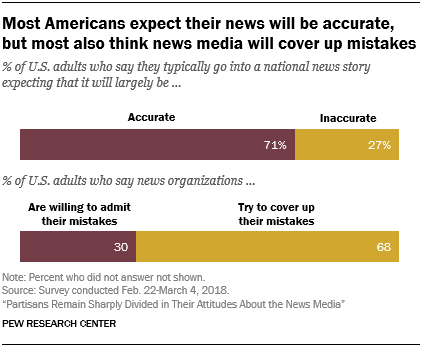 About seven-in-ten Americans (71%) go into national news stories expecting they will be largely accurate, compared with about three-in-ten who think they will be largely inaccurate (27%). And while few Americans have a lot of trust in the information they get from national news organizations, this figure is in line with the portion who have at least some trust (71%).

While majorities of both Democrats and Republicans believe their national news will be accurate, this view is more common among Democrats (86%) than Republicans (62%). Republicans are about three times as likely as Democrats to expect the national news stories they get will largely be inaccurate (37% vs. 13%). 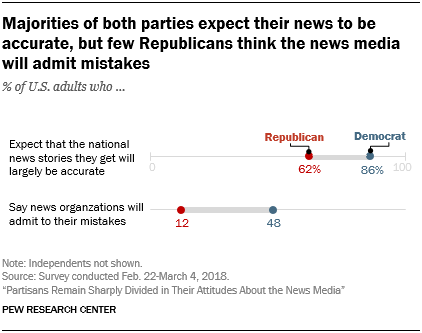 Independents fall between Democrats and Republicans on both questions, with nearly seven-in-ten (69%) saying their news will largely be accurate, and about a quarter (27%) saying that news organizations will admit to their mistakes. 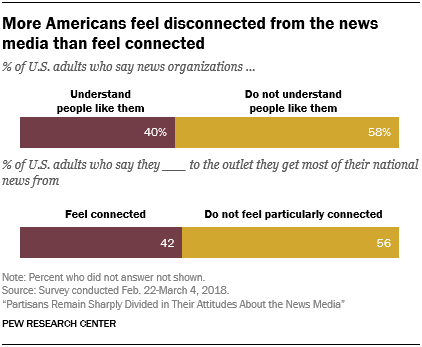 And in what may be another indicator of trust levels, most Americans say they do not feel understood by or connected to news organizations. This sense of disconnectedness is stronger among Republicans than Democrats. 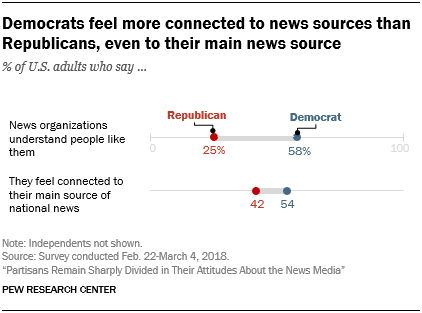 Democrats again are more likely to have a positive impression of the news media than Republicans – that is, more likely to say they feel understood by and connected to news organizations. Almost six-in-ten Democrats (58%) say that news organizations understand people like them, more than twice the share of Republicans (25%) and higher than independents (36%). Democrats are also more likely than Republicans to feel personally connected to their main source of national news, although the gap is smaller (54% vs. 42%, respectively). Independents are less likely (35%) to feel this connection than members who identify with either of the major parties.2

Next: Acknowledgments
← Prev Page
Page1Page2You are reading page3Page4Page5Page6Page7
Next Page →

Partisans Remain Sharply Divided in Their Attitudes About the News Media 1. Democrats and Republicans remain split on support for news media's watchdog role
2. Most Americans think their news will be accurate but are less confident that news organizations will admit mistakes
Acknowledgments Methodology Appendix A: Detailed tables Appendix B: Political party detailed tables (2016-2018)