The analysis in this report is based on a nationally representative survey conducted from Feb. 22 to March 4, 2018, among 5,035 U.S. adults ages 18 years or older. The margin of error for the full sample is plus or minus 1.5 percentage points. This report was made possible by The Pew Charitable Trusts, which received support from the John S. and James L. Knight Foundation, the Ford Foundation, Bill & Melinda Gates Foundation and the Open Society Foundations. Support for the research is part of Knight Foundation’s Trust, Media and Democracy initiative, which aims to strengthen the role of strong, trusted journalism as essential to a healthy democracy.

KnowledgePanel continually recruits new panel members throughout the year to offset panel attrition as people leave the panel. All active members of the GfK panel were eligible for inclusion in this study. In all, 8,066 panelists were invited to take part in the survey. All sampled members received an initial email to notify them of the survey and provided a link to the survey questionnaire. Additional follow-up reminders were sent to those who had not responded as needed.

The final sample of 5,035 adults was weighted using an iterative technique that matches gender, age, race, Hispanic origin, education, region, household income, home ownership status and metropolitan area to the parameters of the Census Bureau’s March 2016 Current Population Survey (CPS). This weight is multiplied by an initial sampling or base weight that corrects for differences in the probability of selection of various segments of GfK’s sample and by a panel weight that adjusts for any biases due to nonresponse and noncoverage at the panel recruitment stage (using all of the parameters described above).

The table shows the unweighted sample sizes and the error attributable to sampling that would be expected at the 95% confidence level. 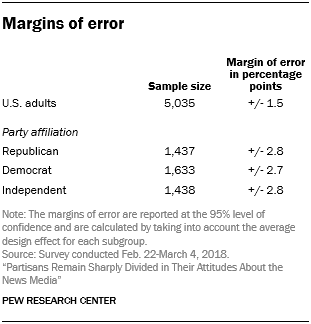 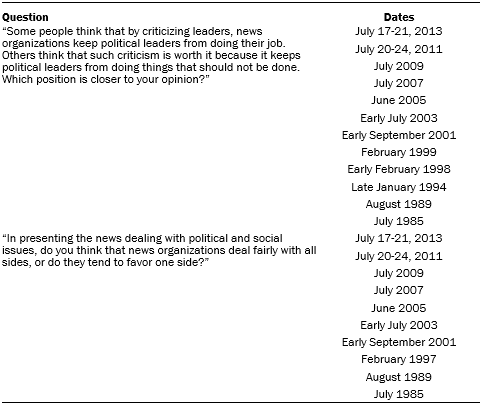 Next: Appendix A: Detailed tables
← Prev Page
Page1Page2Page3Page4You are reading page5Page6Page7
Next Page →

Partisans Remain Sharply Divided in Their Attitudes About the News Media 1. Democrats and Republicans remain split on support for news media's watchdog role 2. Most Americans think their news will be accurate but are less confident that news organizations will admit mistakes Acknowledgments
Methodology
Appendix A: Detailed tables Appendix B: Political party detailed tables (2016-2018)