Overall, some groups of Americans are far better at parsing through news content than others, suggesting gaps in the public’s competence. Most prominently, Americans’ familiarity with politics and the digital world bleeds into how they understand statements in the news. Those with high political awareness (those who are both knowledgeable about politics and regularly get political news) and high digital savviness (those who say they are highly capable of using digital devices and regularly use the internet) are much more likely to know the difference between factual and opinion news statements. Likewise, Americans with a lot of trust in national news organizations have an easier time separating factual from opinion statements than those with less trust. How closely one follows the news, on the other hand, provides only a modest edge in classifying factual statements, but not opinions.

Even though these characteristics relate in predictable ways to education, these relationships hold true even when accounting for level of education.7 Further, there is relatively modest overlap among the groups, meaning that each of these groups is distinct.8 For example, just 32% of those with high political awareness also have a lot of trust in national news organizations. The group that shows the largest overlap with the other groups is those who are very digitally savvy, since they account for a large portion of the population generally (48%), but even here the overlap with the other groups never reaches more than 58%. 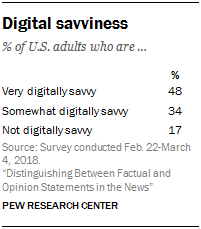 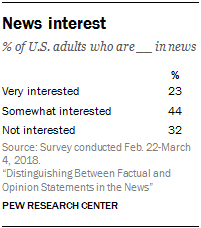 What’s more, just under half of those with low political awareness (45%) accurately classified two or fewer of the factual statements, misclassifying more than half of them. This was true of just 16% of those with high awareness.

While some groups did fare better than others, overall, there was no group where a majority classified all five factual or opinion statements correctly.

Like those with low political awareness, just under half of the not digitally savvy (45%) correctly classified two or fewer factual statements, erroneously identifying most as opinions. They were slightly more successful at the opinion statements, with around a third (34%) classifying two or fewer correctly.

Similar to those high in political awareness, those who are very digitally savvy were more likely to categorize both borderline statements as opinions than those who are less savvy.

Previous Pew Research Center findings that Americans’ attitudes about the news are strongly related to their news habits are reinforced in this study: Those more trusting of national news organizations are better at accurately categorizing factual and opinion statements.

Likewise, looking at other news attitudes also measured in this survey, such as skepticism toward news and connection to news outlets, found that those who are less skeptical toward the news media were more likely to correctly classify both factual and opinion news statements. Respondents who feel a closer connection to their news outlets were more likely to correctly classify the factual statements. 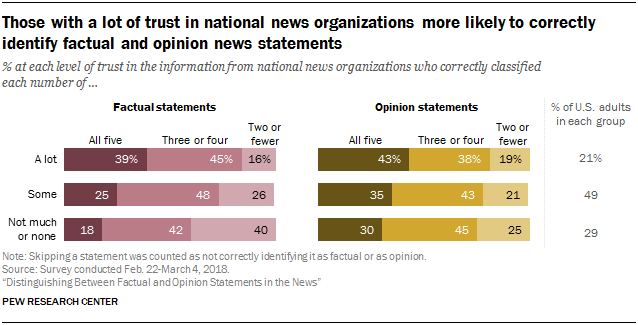 Overall, about one-in-five U.S. adults (21%) has a lot of trust in the information they get from national news organizations, about half (49%) have some trust and 29% have not too much trust or none at all. And while Democrats are more likely than Republicans to trust the news media a lot (35% vs. 12%, respectively), the findings hold true even when accounting for party differences.

The role of education

While those with high political awareness, digital savviness and trust in national news organizations are overall more educated, the findings persist even when accounting for level of education.

As is often seen with survey measures of proficiency, Americans’ level of education makes a difference. Indeed, those with more education are more likely to classify factual and opinion statements correctly, with a magnitude of difference similar to that for political awareness and digital savviness. And given the differences between the very digitally savvy and those less so, it is not surprising that age matters as well, with those ages 18 to 49 being better at classifying statements than those ages 50 and older.9 For a full breakdown, see Appendix B.

Greater interest in news connects modestly to correct classifications of factual statements; no difference for opinions

In contrast to attitudes about the news, having greater interest in the news is not as closely related to deciphering factual from opinion statements.

Other measures of news interest asked about in the survey were also only weakly predictive of success in classifying statements. For instance, those who are highly engaged with the news by doing such things as writing letters to the editor, sharing news on social media or performing other actions with the news were more likely than those less engaged to correctly identify the factual statements. This was also true when comparing those who tend to put more consideration into their news (those saying they like to gather additional information about stories they see, debate the news with others and think about the news). 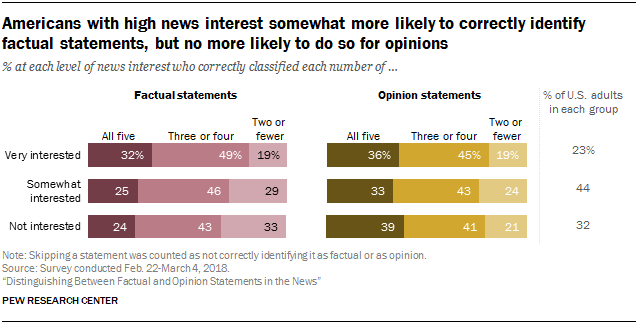 Next: 3. Republicans and Democrats more likely to classify a news statement as factual if it favors their side – whether it is factual or opinion
← Prev Page
Page1Page2You are reading page3Page4Page5Page6Page7Page8Page9Page10
Next Page →