Americans are more likely than not to correctly distinguish factual statements from opinions, suggesting they have some proficiency in understanding the type of news content they see. But there is still a fair amount of misinterpretation.6

In this new study, a little over 5,000 U.S. adults were shown a mix of five factual and five opinion statements across a range of policy and current event topic areas. For each, they were asked to identify the statement as either factual – one that could be proved or disproved based on objective factual evidence – or as an opinion.

About a quarter of Americans (26%) correctly identified all five of the factual statements, while roughly the same percentage (28%) got no more than two correct. The largest portion (46%) answered three or four correctly. Overall, about three-quarters of Americans (72%) got more correct than incorrect – classifying at least three as factual.

Some statements were correctly identified more often than others

Overall, Americans were reasonably adept at identifying each of the five factual and five opinion statements. For each statement, a majority correctly identified it as either factual or opinion. However, Americans tended to better identify some statements than others. Among the factual statements, about three-quarters of Americans (77%) correctly identified “President Barack Obama was born in the United States” and about the same portion (76%) correctly classified “Health care costs per person in the U.S. are the highest in the developed world” as factual. The two factual statements that the public had the most difficulty with were “Spending on Social Security, Medicare, and Medicaid make up the largest portion of the U.S. federal budget” and “Immigrants who are in the U.S. illegally have some rights under the Constitution,” correctly labeled by just over half of respondents (57% and 54%, respectively). 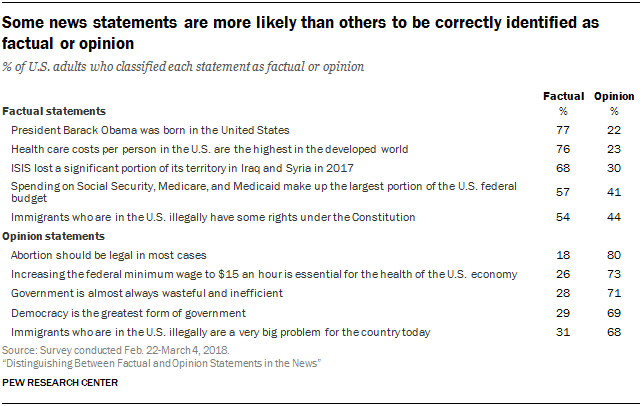 Not all news statements are unambiguously based in factual evidence or in a journalist’s or source’s beliefs, but rather fall somewhere in between the two. Statements that are in this murky space between factual statements and opinions – termed here as “borderline” statements – are more often treated by Americans as opinions.

Looking at the individual statements, about three-quarters of Americans (74%) said “Applying additional scrutiny to Muslim Americans would not reduce terrorism in the U.S.” was an opinion, as did about two-thirds (66%) for “Voter fraud across the U.S. has undermined the results of our elections.”

The statement “Applying additional scrutiny to Muslim Americans would not reduce terrorism in the U.S.” is predictive, and while evidence can be used to make an argument, it cannot be definitely proved or disproved because the results of such a policy in the U.S. are not yet known. For the second statement, “Voter fraud across the U.S. has undermined the results of our elections,” while there is a variety of evidence around the topic of voter fraud, the vagueness of the language of undermining election results makes it difficult to definitively show the relationship one way or the other.

Next: 2. The ability to classify statements as factual or opinion varies widely based on political awareness, digital savviness and trust in news media
← Prev Page
Page1You are reading page2Page3Page4Page5Page6Page7Page8Page9Page10
Next Page →