Americans offer a mixed evaluation of how well the news media cover science, but more say that overall they do a good, rather than a bad job. When delving more deeply, however, Americans show skepticism in the accuracy of general news outlets, instead placing more trust in specialty information sources. And, while many see problems in coverage of scientific research stemming from a range of players, when asked to choose, most Americans say the bigger problem stems from how reporters cover scientific research than from the way researchers publish their findings. 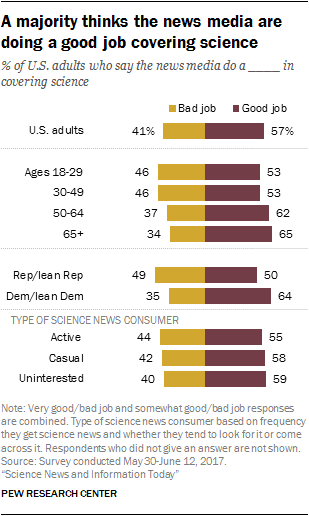 While this finding is in keeping with the relatively positive assessments in previous Pew Research Center surveys of how the media cover specific science topics, notably childhood vaccines, it stands in contrast to the mostly negative views Americans hold of how the news media, generally, affect the country.10

Democrats and independents who lean to the Democratic Party are more likely than Republicans and those leaning Republican to say the news media are doing a good job (64% vs. 50%). This political difference is in line with general assessments of the news media.

When it comes to rating the accuracy of science information, however, Americans are most likely to say niche science sources get the facts right.

At the top for accuracy are science and technology museums, documentaries or other science video programs, and science magazines, each of which roughly half of Americans say get the facts right most of the time (either “almost all” or “more than half” of the time). 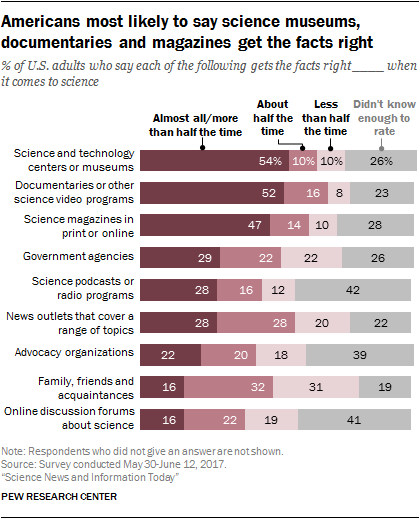 Next are the trio of government agencies, science radio/podcasts and general news outlets, which about three-in-ten adults say get the facts right most of the time. Although far more Americans (42%) acknowledge they don’t know enough about science audio programs to rate their accuracy. Among those who were knowledgeable about such radio/podcasts, the balance of opinion is these programs get the facts right more than half or almost all the time (51% of those who gave an opinion), which would outpace both government and general news outlets. 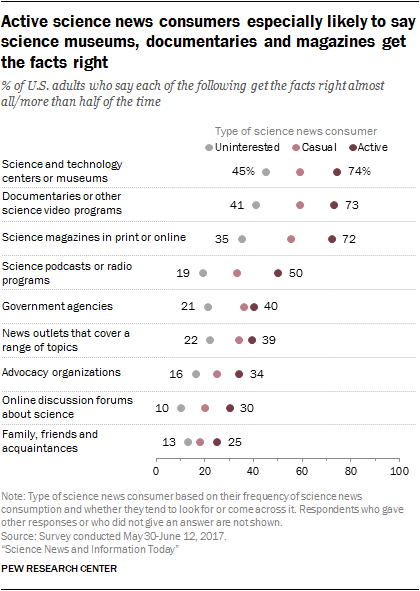 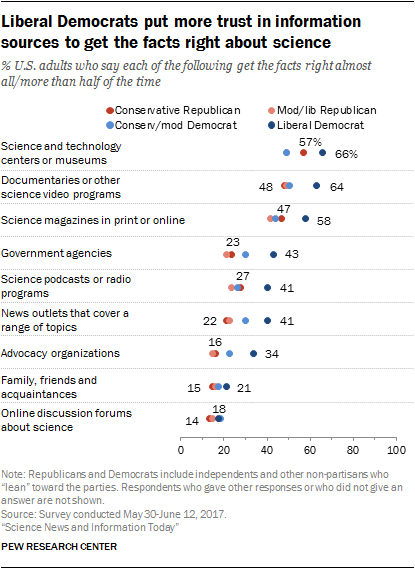 Similarly, 41% of liberal Democrats say news outlets that cover a range of topics get the facts right about science most of the time, compared with 22% of conservative Republicans.

Political differences tend to be smaller than differences between types of science news consumers, however.

Many Americans see problems in coverage of scientific research stemming from scientists, the news media and themselves 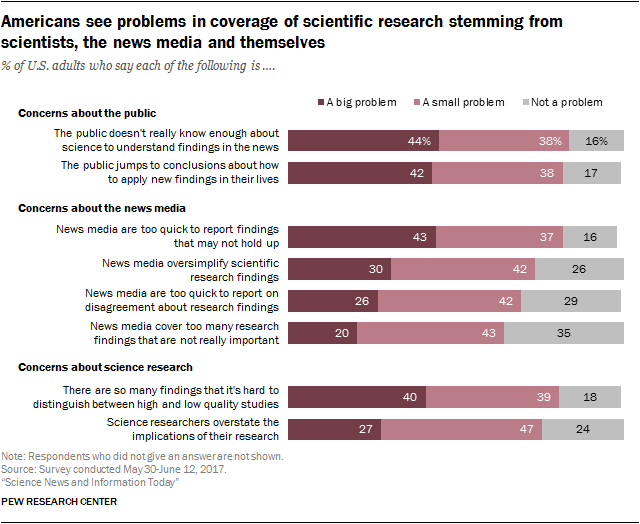 Still, a similar share of Americans express concern about how the media report on scientific research: 43% of U.S. adults say it is a big problem that the news media are “too quick to report research findings than may not hold up.” A smaller share (30%) says that media oversimplifying scientific research is a big problem, while another 42% say this is a small problem.

Many Americans also believe that researchers affect the quality of science news coverage. For example, four-in-ten Americans (40%) say it is a big problem that there are so many research studies being published that it is hard to distinguish between high- and low-quality studies. 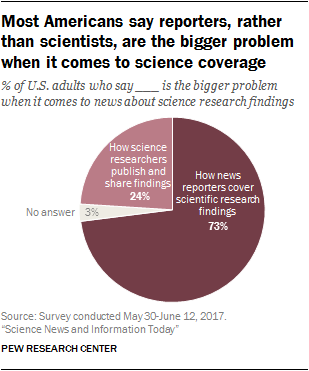 When asked, however, to choose whether the bigger problem rests in how media cover research or how researchers publish or share their findings, many more Americans put the onus on the media than on scientific researchers (73% vs. 24%), as do large majorities of both conservative Republicans (80%) and liberal Democrats (74%).

Next: 4. Most Americans see at least some science posts on social media but tend to distrust what they see
← Prev Page
Page1Page2Page3You are reading page4Page5Page6Page7Page8Page9Page10
Next Page →