Social media platforms are proving themselves to be value-added sources of science information for some. Among social media users, 44% say they at least sometimes see science news they wouldn’t see elsewhere. But, many are also highly skeptical of the news they are seeing. Only about a quarter (26%) of social media users say they mostly trust the science posts they find on these sites, compared with twice that (52%) who mostly distrust them. 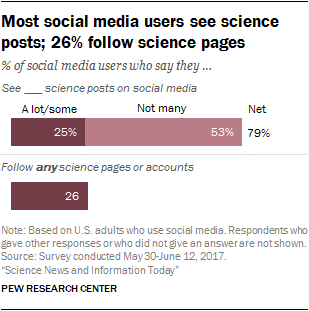 About seven-in-ten Americans say they use social media, a figure that has gone up steadily over the past decade. Among that group, 79% (55% of all U.S. adults) report seeing science-related posts on social media – but only 25% see “a lot” or “some” science posts, while about half (53%) see “not many” (21% of users see no posts about science).

A minority of Americans are actively seeking science information on social media. About a quarter (26%) of social media users (18% of U.S. adults) say they follow any pages or accounts that focus on science. 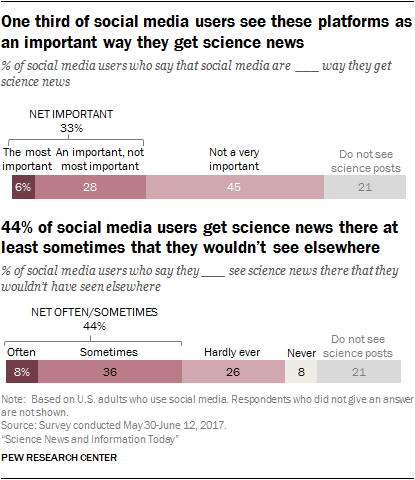 An ongoing question about social media is whether they amplify news also seen in other venues or expose users to new content. The survey finds 44% of social media users see content unique to that platform at least sometimes, though 8% say they do so often. A smaller share of users, 34%, say what they see on these platforms is hardly ever or never something they would not have seen elsewhere. 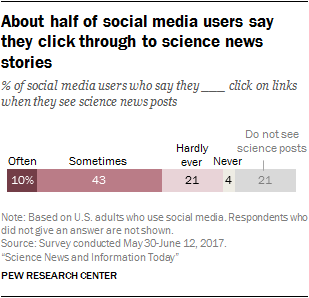 Most social media users click through to articles about science news outside of the sites themselves; 54% at least sometimes go beyond the post, clicking on external links to science information but, as with seeing posts overall, few do this often (10%).

Many social media users see science-related posts, but about half distrust what they see 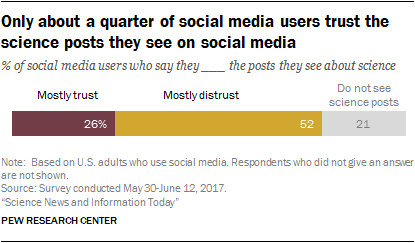 The relatively low levels of trust is broadly in keeping with past studies by Pew Research Center on general news consumption; a 2016 survey found internet users to be less trusting of news found on social media than they were of other sources, including local and national news outlets.11 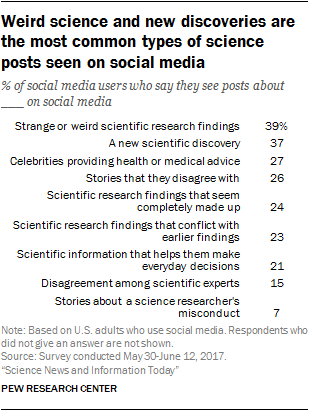 In terms of the specific types of science information that people get on social media, “strange or weird” scientific findings and new scientific discoveries are, by far, the most common types of posts seen on these platforms.

About a quarter (27%) of social media users have seen health or medical advice from celebrities on social media, a phenomenon with the potential to both help and hurt public understanding on these topics.12

A similar share of users (26%) report seeing science posts that they disagree with or that seem completely made up (24%). The survey asked respondents about any of five possible responses they have to posts they see that seem made up. The most common way people respond is to search for more information or, to a lesser extent, ignoring or hiding the story. Altogether, some 18% of social media users report taking any of five actions in response to science posts that seemed completely made up: commented on the story, searched for more information, shared the story to show that it is wrong, ignored or hid the story, or unfollowed/blocked the person or organization that originated the story. 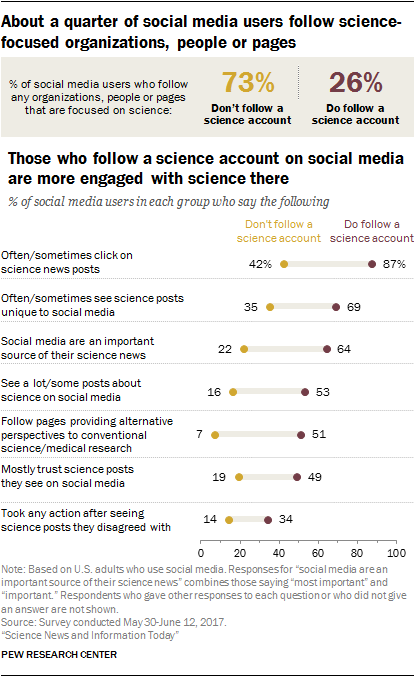 Next: 5. Most Americans see science-related entertainment shows and movies in either a neutral or positive light
← Prev Page
Page1Page2Page3Page4You are reading page5Page6Page7Page8Page9Page10
Next Page →