Even as news has diversified into multiple types of platforms and niche outlets, the general news media play an important role in providing the public news about science.9 This is true for active science news consumers as well, though they are more likely to also turn to specialty outlets.

Beyond the topics of science news, the most common science stories people see are reports on new discoveries, followed by stories about “strange or weird” research findings.

More Americans rely on news outlets that cover a range of topics for science news than on specialty outlets. 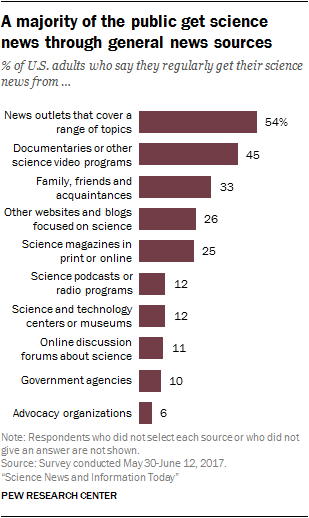 A similar propensity towards general news outlets emerges when asking more specifically about 10 different types of sources for science news. Some 54% of Americans regularly get science news from outlets that cover a range of topics. The next most common source is documentaries or other science video programs (45%), while roughly one-quarter of Americans rely on websites and blogs focused on science (26%) or science magazines (25%). Far fewer Americans regularly rely on science specialty radio programs or podcasts (12%), science and technology museums (12%), online discussion forums about science (11%), government agencies (10%) or advocacy organizations (6%) for science news.

There is an ongoing concern, particularly in the medical and public health communities, about the extent to which the public attends to alternative medical information, rather than conventional sources. When asked separately about these types of sources, just 8% of Americans say they regularly get science news from “sources that provide alternative perspectives to conventional science or medical research.” 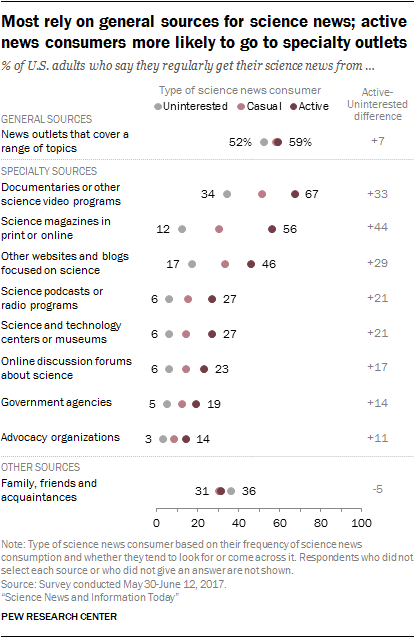 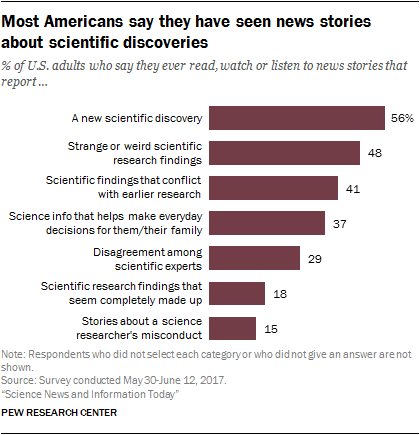 Science news covers a wide range of scientific fields whether biology, medicine, physics or something else. Some have criticized science journalism for too much emphasis on “gee-whiz” writing that, while enticing, gives too little attention to the relevance of science for the average person or the quality of the research.

The data here indicate that there is a bit of both going on. Most Americans (56%) see scientific discoveries, and more than a third of Americans (37%) say they see science news stories that help them make decisions about everyday life for themselves and their family.

When asked to describe a recent science news story that helped them make everyday decisions, the most frequent topics mentioned were about medicine and health stories followed by food and nutrition stories. For example, one respondent mentioned a radio program about the shingles vaccine led them to get vaccinated and another mentioned a story about a correlation between eating red meat and propensity for chronic disease that led them to change their eating habits. A smaller share of those seeing such stories mention stories about climate change and the environment leading to decisions in their everyday life.

Science news also sometimes contains contradictory information or notes disagreement among scientific experts. Some 41% of Americans report having seen news stories with scientific information that conflicts with earlier findings on the same topic. About three-in-ten Americans (29%) have seen news stories noting disagreement among scientific experts; among this group, climate change stories are most commonly cited (32%).

Fewer U.S. adults report seeing science news stories about a science researcher’s misconduct (15%) or about scientific research findings that seem completely made up (18%). Those that have seen this kind of story mentioned a number of topics including climate change, extraterrestrials and a variety of other topics.

There are no more than modest differences across demographic and educational groups in the types of science news seen. Further, there are only modest differences between Republicans and Democrats (including independents who lean to each party, respectively) in the kinds of science stories encountered. For example, 32% of Republicans say they see news that reports disagreement among scientific experts, as do 27% of Democrats. Some 22% of Republicans say they see news reports about scientific research that seem completely made up – only modestly higher than the 16% of Democrats who say the same. 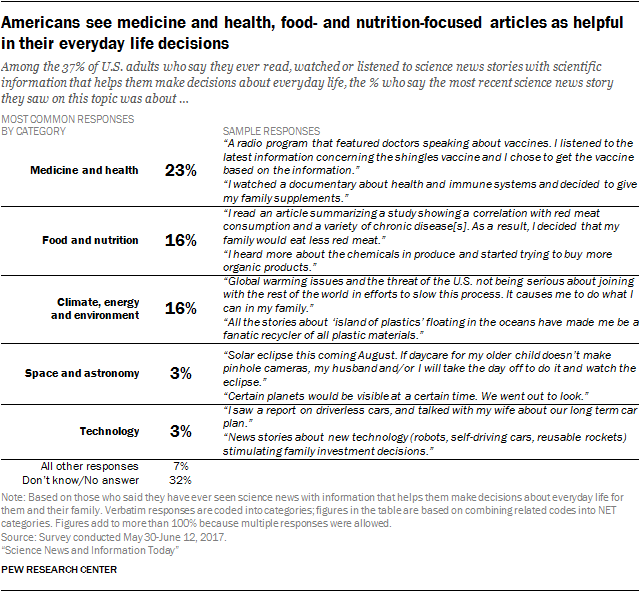 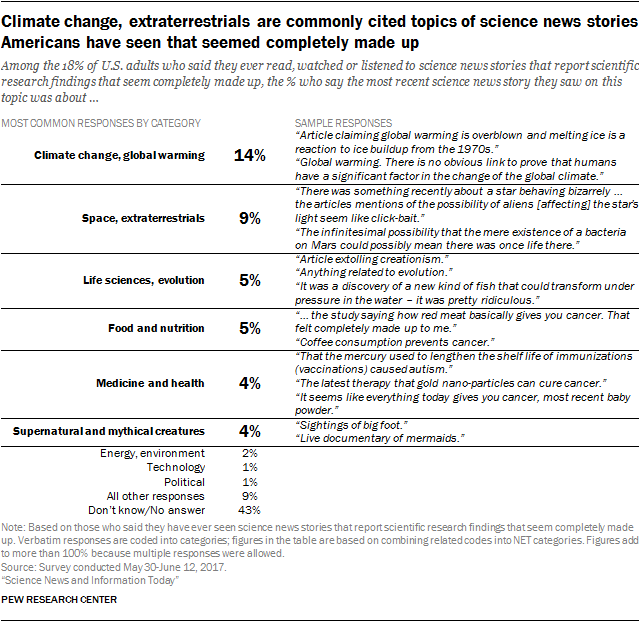 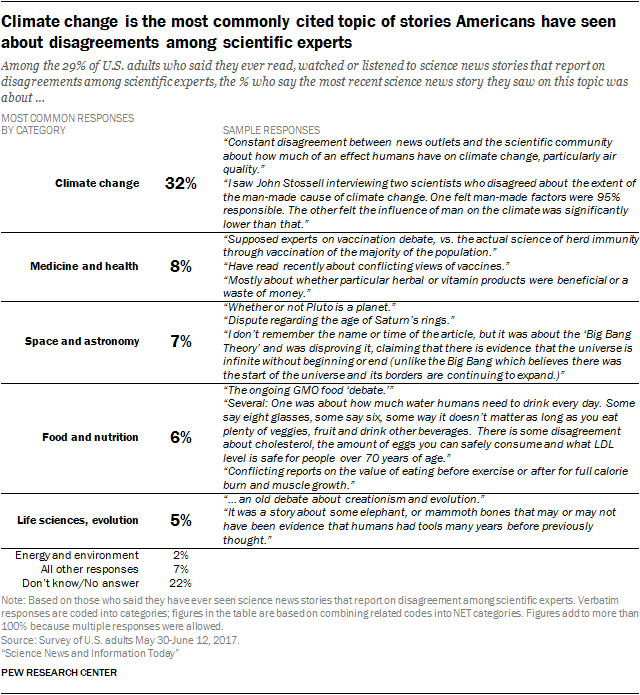 Next: 3. Niche information sources are most trusted to get the facts right about science
← Prev Page
Page1Page2You are reading page3Page4Page5Page6Page7Page8Page9Page10
Next Page →