The analysis in this report is based on a nationally representative survey conducted from Feb. 22 to March 4, 2018, among a sample of 5,035 adults 18 years of age or older. The margin of error for the full sample is plus or minus 1.5 percentage points. This report was made possible by The Pew Charitable Trusts, which received support from the John S. and James L. Knight Foundation, the Ford Foundation, Bill & Melinda Gates Foundation and the Open Society Foundations. Support for the research is part of Knight Foundation’s Trust, Media and Democracy initiative, which aims to strengthen the role of strong, trusted journalism as essential to a healthy democracy.

KnowledgePanel continually recruits new panel members throughout the year to offset panel attrition as people leave the panel. All active members of the GfK panel were eligible for inclusion in this study. In all, 8,066 panelists were invited to take part in the survey. All sampled members received an initial email to notify them of the survey and provided a link to the survey questionnaire. Additional follow-up reminders were sent to those who had not responded as needed.

The final sample of 5,035 adults was weighted using an iterative technique that matches gender, age, race, Hispanic origin, education, region, household income, home ownership status and metropolitan area to the parameters of the Census Bureau’s March 2016 Current Population Survey (CPS). This weight is multiplied by an initial sampling or base weight that corrects for differences in the probability of selection of various segments of GfK’s sample and by a panel weight that adjusts for any biases due to nonresponse and noncoverage at the panel recruitment stage (using all of the parameters described above).

The table shows the unweighted sample sizes and the error attributable to sampling that would be expected at the 95% confidence level.

Assessing factual and opinion statements in the news

Asking respondents to categorize statements as factual or opinion

Respondents were asked to categorize each statement into one of two categories: a factual statement (regardless of whether it was accurate or inaccurate) or an opinion statement (whether they agree with it or not).

Each statement appeared in an image that was intended to look as if it were a quotation pulled from a news story.

The initial set of 12 statements included five factual, five opinion and two borderline statements developed by Pew Research Center analysts and subject-matter experts in conjunction with an external advisory board. Factual statements are unambiguous statements that one can prove to be accurate or inaccurate based on objective evidence. Opinion statements are based in people’s beliefs and values, whether political, religious, moral, cultural, or some other belief system, and therefore lack traditional standards of objectivity. And borderline statements have elements of both factual and opinion statements – they can be based in objective evidence, but claims are vague enough that they can neither be unambiguously proved nor disproved by factual evidence, in part because such evidence is often conflicting, incomplete, contested or involves making predictions.

Next, a number of the statements were pretested using nonprobability online surveys to ensure that they would be understood by respondents. Lastly, the final set of statements was reviewed by Center subject matter experts and an external board of advisers with three goals in mind:

Researchers deliberately decided to include statements that lend support to the political views or policy position of each side of the political spectrum. In today’s polarized media environment, much of the news content has ideological appeal. For example, a 2017 Pew Research Center study that looked at how news organizations covered the beginning days of the Trump administration found that while outlets largely covered the same storylines, the tone of the coverage varied dramatically based on whether the outlet had a right-leaning, left-leaning or more mixed audience. With this in mind, statements in this study appealed to each side of the political spectrum to understand how Americans interpret statements that would mimic what people may see around contentious issues – that is, statements that are either true (in the case of the factual statements) or opinions, but nevertheless support an overall tone favoring one side or another.

A number of steps were taken to determine the ideological appeal of a statement. For the factual statements, existing literature on the political views of each side was pulled from various outlets and organizations. Factual statements that lend support to views held by more of those on one side of the ideological spectrum (and less of those on the other side) were classified as appealing to that side. Opinion statements were classified as appealing to one side if they were supported more so by one side in recent surveys. In addition, two “neutral” statements were included – one factual and one opinion statement – which were intended to appeal equally to the left and right. The borderline statements relied both on existing polling and other sources to determine whether each appealed to a particular policy narrative.

Attribution of statements to news outlets

For those who saw the statements attributed to news outlets, each statement was randomly attributed to one of the three. Additionally, each respondent randomly saw three statements from two of the outlets and two from the third outlet. This was done so that each respondent saw a mix of outlets across the eight statements. The content of the statement and the visual appearance of the image looked exactly the same except for the news outlet attribution. The final layout of the source lines was based on best practices in company identification. The example below shows one of the statements across the four different attributions. 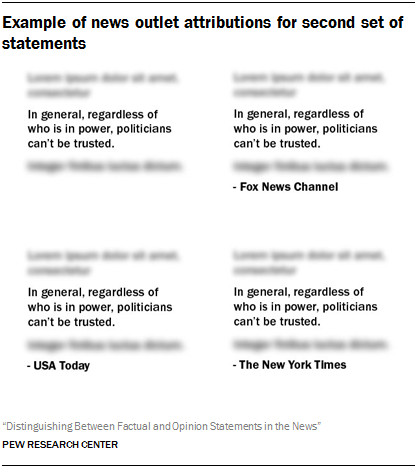 Analyzing the impact of news outlets 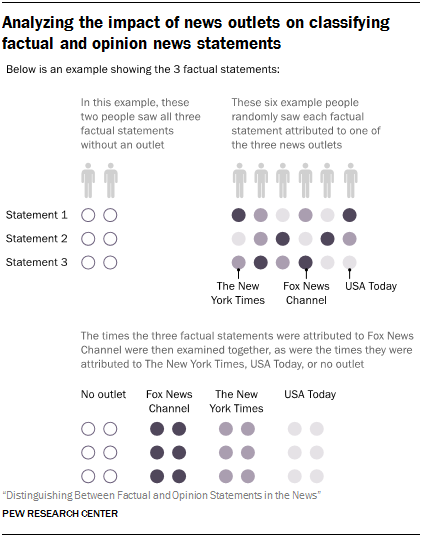 Since everyone who saw the statements attributed to news outlets saw a mix of all three outlets, it was not possible to break up respondents into discrete groups as was done for the initial set. Instead, this analysis grouped together all of the times the 5,035 respondents saw a statement attributed to each of the outlets or no outlet at all. The results, then, are framed as the percent of the time that respondents classified the factual, opinion and borderline statements as factual or opinion for each outlet. For example, for the three factual statements, we analyzed the percent of the time that respondents said they were factual when they were attributed to Fox News, The New York Times, USA Today or no outlet at all. The illustration shows how the data are organized for this analysis.

Next: Appendix A: Measuring capacity to classify statements as factual or opinion
← Prev Page
Page1Page2Page3Page4Page5Page6Page7You are reading page8Page9Page10
Next Page →