Among Millennials, Facebook is far and away the most common source for news about government and politics. When asked whether they got political and government news from each of 42 sources in the previous week (36 specific news outlets, local TV generally and 5 social networking sites), about six-in-ten Web-using Millennials (61%) reported getting political news on Facebook. That is 17 points higher than the next most consumed source for Millennials (CNN at 44%). 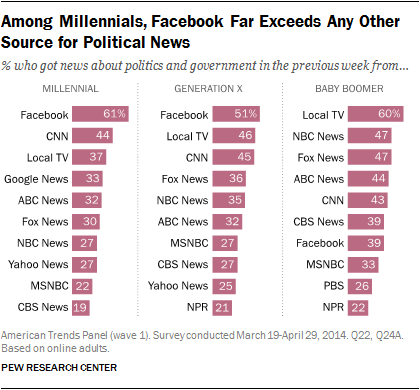 Millennials are also more reliant than other generations on Google News. A third (33%) get political news there, about twice the percentage of Baby Boomers (15%) and Gen Xers (18%). There is not, though, the same level of disparity when it comes to Yahoo News – perhaps tied in part to the early days of Yahoo as an email domain and portal; 27% of Millennials get political news from Yahoo, on par with Gen Xers (25%), but somewhat higher than Baby Boomers (21%).

A source turned to at similar, and rather high rates across all three generations is CNN: 44% of Millennials got political news there in the past week as did 45% of Gen Xers and 43% of Baby Boomers.

While these data do not speak to the amount of time spent with news, they do suggest that the sources for and the pathways to political news vary substantially across generations. This sortable interactive provides the full breakdown of the rate at which each generation gets news about government and politics from each of the sources asked about. 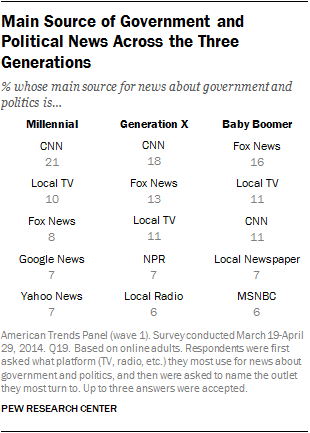 When asked separately to name their main source for news about government and politics (before being asked about the 42 specific sources), only a handful of sources garner double-digit percentages within each of the three generations. CNN, for example, is named most often by both online Millennials and Gen Xers at 21% and 18%, respectively; and among Baby Boomers, 16% name Fox News and 11% name CNN as their main source. About one-in-ten in each of these generations name local TV. All other sources are named by less than 10%.

These findings also suggest the degree to which Facebook, even though it is by far the most common way Millennials get news about government and politics, is not top of mind as their main source for this type of news. Three percent of online Millennials volunteer Facebook when asked for their main source for political news (as do 1% of both Gen Xers and Baby Boomers. This is consistent with our previous research indicating that getting news on Facebook is largely an incidental experience.

A Deeper Look at Facebook as a Source for Political News 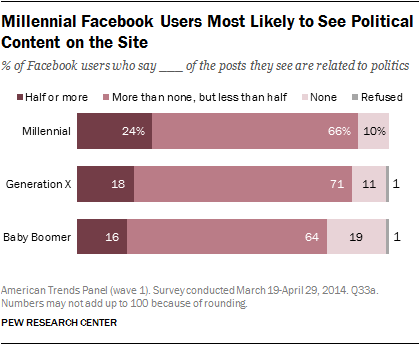 One factor shaping the extent to which Americans of different ages are relying on Facebook for news is the portion of each generation that is on Facebook in the first place. Looking across the total adult population (including non-Web users), nearly nine-in-ten Millennials (87%) are on Facebook, compared with 77% of Gen Xers and just over half (57%) of Baby Boomers.1

But even taking into account these differences, and looking just at Facebook users within each generation, Millennials are still somewhat more likely to see political content there.

Nearly a quarter (24%) of Millennials who use Facebook say that at least half of the posts they see on the site are related to government and politics, higher than both Gen Xers (18%) and Baby Boomers (16%). At the other end of the spectrum, just 10% of Facebook-using Millennials see no political posts, on par with Gen Xers (11%), but both lower than Baby Boomers (19%). 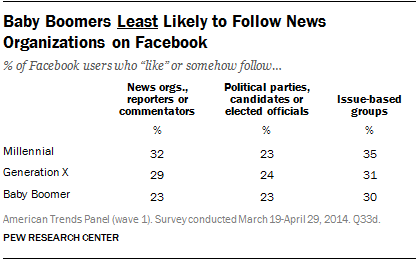 What’s more, both Millennial and Gen X Facebook users are more likely than Baby Boomers to follow news organizations via the social networking site, although there is no real difference in the portion of each generation’s Facebook users that follow political parties or candidates, or issue-based groups. 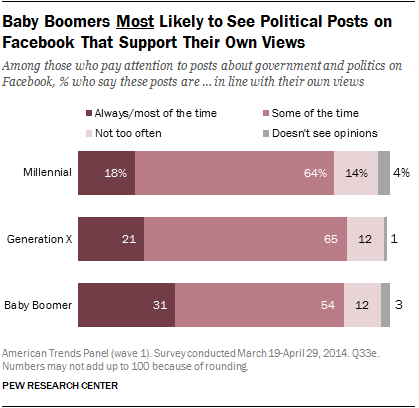 At the same time, while most Facebook users who pay attention to political content do, in fact, see views on the site that aren’t in line with their own, Baby Boomers are the most likely to see political content on Facebook that supports their own views: 31% of Baby Boomers on Facebook who pay attention to political posts say the posts they see are mostly or always in line with their own views, higher than both Gen Xers (21%) and Millennials (18%). But, as discussed above, Baby Boomers are the least reliant on this platform as a source for political news.

The findings comport with our earlier research on Facebook and news, which revealed that younger users get news on Facebook at greater proportions than older users, and tend to use it for a wider range of activities. Millennials, in other words, are more apt to turn to Facebook as a way to keep up with what is going on, day in and day out. In doing so, part of what they see is news – even more so than older users who have more dedicated news habits outside of Facebook. 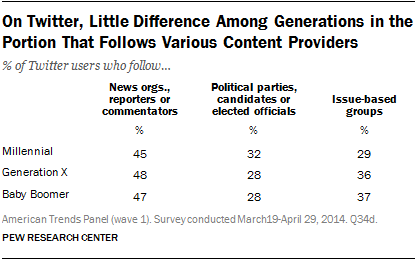 Across all three generations, Twitter is a far less common source for political news than Facebook; 14% of online Millennials got political news on Twitter in the past week, slightly higher than both Gen Xers (9%) and Baby Boomers (5%).

Next: Millennials No Less Trusting (or Distrusting) of News Sources
← Prev Page
Page1Page2You are reading page3Page4Page5Page6Page7Page8
Next Page →