When it comes to where younger Americans get news about politics and government, social media look to be the local TV of the Millennial generation. About six-in-ten online Millennials (61%) report getting political news on Facebook in a given week, a much larger percentage than turn to any other news source, according to a new Pew Research Center analysis. This stands in stark contrast to internet-using Baby Boomers, for whom local TV tops the list of sources for political news at nearly the same reach (60%). 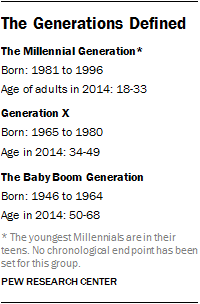 Gen Xers, who bridge the age gap between Millennials (ages 18-33 at the time of the 2014 survey) and Baby Boomers (ages 50-68), also bridge the gap between these news sources. Roughly half (51%) of online Gen Xers get political and government news on Facebook in a given week and about half (46%) do so on local TV.

This report, the latest in an ongoing study of political news and information habits, is based on an online survey conducted between March 19 and April 29, 2014, with 2,901 members of the Pew Research Center’s American Trends Panel. An initial report on these data explored the ways news consumption differs across the ideological spectrum. Here, we consider political news habits across three generations. Because this is a survey of online adults, data is not reported on those in the Silent generation, ages 69 to 86 at the time of survey. This age cohort is considerably less likely to use the internet and, as a result, those who are online may not be representative of the generation as a whole.

Even looking just at members of each generation who are on Facebook, Millennials still stand out for seeing somewhat more political content on the site. Roughly a quarter (24%) of Millennials who use Facebook say at least half of the posts they see on the site relate to government and politics, higher than both Gen Xers (18%) and Baby Boomers (16%) who use the social networking site.

This occurs even though Millennials express less interest in political news. Roughly a quarter of Millennials (26%) select politics and government as one of the three topics they are most interested in (out of a list of nine). That is lower than both Gen Xers (34%) and Baby Boomers (45%). Millennials also are less familiar with many of the 36 sources asked about in the survey, which range from USA Today to Rush Limbaugh to Slate. 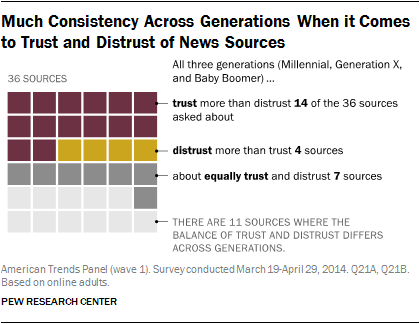 The data do not suggest, however, that Millennials’ relative lack of engagement with or awareness of sources is based on some sort of deep-seated mistrust of the news media. Of the sources they are familiar with, Millennials are no less trusting than older generations. All three generations trust, on average, about four-in-ten sources they have heard of and distrust about two-in-ten. There are also few differences when it comes to which specific sources are trusted and distrusted across generations. Fourteen of the 36 sources are trusted more than distrusted by all three generations and four are more distrusted across the board.

A longer-term question that arises from this data is what younger Americans’ reliance on social media for news might mean for the political system. Understanding the nuances of the social media news environment is complicated: The experience is individualized through one’s own choices, through the friends in one’s network and their proclivities, and through algorithms – all of which can change over time. We are only beginning to understand these complex interactions.

Viewed in the context of the ongoing debate over political polarization in social media, for example, it is the Facebook users in the oldest of the three generations studied here who are most likely to see political content on the site that supports their own views: 31% of Baby Boomers on Facebook who pay attention to political posts say the posts they see are mostly or always in line with their own views, higher than both Generation Xers (21%) and Millennials (18%). At the same time, though, Baby Boomers are the least reliant on this platform as a source for their news – meaning that at least at the moment, this affects a smaller share of them. And, across all three generations, most Facebook users who pay attention to political content do, in fact, see views on the site that aren’t in line with their own.

As the research continues, these data suggest that younger and older generations espouse fundamental differences in the ways they stay informed about political news – differences that are of particular interest as the 2016 election campaigns ramp up.

This Web-based survey was conducted March 19 to April 29, 2014, among the 88% of the American Trends Panel — a nationally representative panel of randomly selected U.S. adults — who have online access. The online format provided a unique opportunity to get both a depth and breadth of information about the media habits of our panelists in a way that could not have been accomplished through another mode. This is indicated throughout the report by references to “online” or “Web-using” segments of each generation.

Due to the reliance on Web respondents, this report focuses on three generations – Millennial, Generation X and Baby Boomer. The Silent generation, those 69 to 86 at the time of survey, is not included in the analysis because of the disproportionately large segment of that generation that is not online. Nearly one-in-three Silents in the first wave of the panel (29%) say they do not use the internet, much higher than the other three generations (2% Millennials, 6% Gen Xers and 14% Baby Boomers). Since all generations are not presented, figures based on all Web respondents are also not shown in the text of the report; figures based on all Web respondents can be found in the topline.

As a part of the survey, panelists were asked about their use and trust of 36 news sources (use, but not trust, was also asked of local television news and five social networking sites). The mix of sources is not meant to be exhaustive, but instead is meant to provide a range of news media, both in terms of platform and audience size. Most of the sources are drawn from those asked about in past Pew Research Center surveys on media consumption. From this initial list, researchers went through an iterative process to add additional sources to provide a greater range in the news media environment – including adding more international, radio and primarily digital sources. For more information on the sources, see Appendix C.

This report is part of ongoing research into political news and information habits in America. The initial analysis of this survey data examined differences across ideological lines. As a whole, differences across generations in levels of awareness and trust of the individual sources largely hold when accounting for ideological consistency. Many patterns also hold for news consumption, though ideological characteristics of Millennials helps explain their lower rate of use of niche sources that have right-of-center audiences. Similarly, the ideological characteristics of Gen Xers and Baby Boomers help explain their greater distrust of the more mainstream sources and niche sources with left-of-center audiences. To get a sense of how political ideology varies across the generations, please see this follow-up blog post.

Next: Political Interest and Awareness Lower Among Millennials
← Prev Page
You are reading page1Page2Page3Page4Page5Page6Page7Page8
Next Page →