On the whole, few IRE journalists say concerns about surveillance and hacking have changed the stories or sources they pursue, but those who identify as reporters do feel an impact when it comes to their sources’ willingness to share information.

Just 13% say concerns about surveillance and hacking have led them to not reach out to a particular source, and even fewer say concerns have led them to not pursue a particular story (3%) or to consider leaving investigative journalism (2%). In addition, only a quarter report being very (5%) or somewhat (18%) concerned that they or the organization they work for will lose a story to a journalist or organization with more sophisticated security measures, while the majority say they are not too (53%) or not at all (24%) concerned about this.

Looking specifically at the cautions that some IRE reporters are taking provides a greater sense of the way communications with sources may, or may not, be changing. Roughly four-in-ten (38%) have, in the past year, at least somewhat changed the way they communicate with sources.

One-third of these reporters (33%) say that over the past year, it has become harder to find sources willing to go on the record, a term that means what the source says can be reported, published or aired. 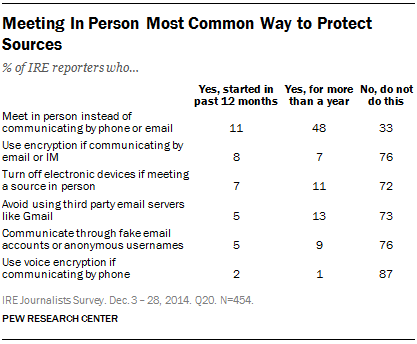 There has been less impact on the willingness of sources to talk off the record, which means that what a source says may not be used for direct publication. About three quarters (74%) report no difference over the past year, while 8% say it has become easier, and 12% say it has become harder. These off-the-record sources are common today. Roughly four-in-ten IRE reporters (42%) use off-the-record sources in some of their stories they produce, and 19% use them in all or most.

When it comes to the specific actions journalists may or may not take to protect their sources, the most common technique by far – practiced among 59% of IRE reporters – is to meet them in person. That is followed by turning off electronic devices when meeting sources (18%), avoiding the use of third-party email servers when communicating with sources (17%), using email encryption (14%), using “fake” or anonymous email and online accounts (14%), and using voice encryption on phones (2%).

In most cases, there are more reporters who have used these techniques for more than a year than reporters who began using them within the last year. The exceptions are email encryption and voice encryption, which are fairly new tools and are only recently being adopted by IRE reporters.

IRE reporters age 40 and older are more likely than younger reporters to say it has become harder to find sources willing to go on the record (40% say this, compared with 29% of those under age 40). They are also more likely to meet sources in person (65% v. 55%), turn off electronic devices when meeting a source in person (23% v. 13%), and avoid using third party email servers when communicating with sources (23% v. 13%).