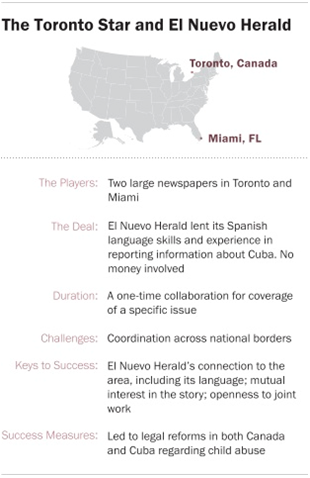 What common interest in an investigative project could Miami’s El Nuevo Herald and the Toronto Star, separated by thousands of miles and a national border, possibly have? The particulars of the story they did together provide the answer – and may also serve as a model of sorts for ad hoc collaborations.

The Star, working outward from a single court case in late 2012, had a lead that numbers of convicted Canadian sex offenders were making regular sex tourism trips to Cuba for encounters with child prostitutes. The route was well-known in the pedophile community but otherwise secret.

Records research took the investigation part of the way there, establishing that Canadian border security officials had no access to a registry of sex offenders, thus allowing the sex tourists to come and go repeatedly without challenge.

Filling in on-the-scene details would be much harder for Star reporters, who were not fluent in Spanish and had no experience making their way around the unfamiliar streets of Havana. Extensive Cuban government restrictions on reporting posed a further challenge.

Enter the Miami-based El Nuevo Herald with decades of experience mining news from Cuba and a senior reporter who could find his way to the most sensitive of information.

At the Star’s initiative, a partnership formed. The resulting story was both shocking and actionable. The Star and El Nuevo Herald reporters observed a troubling scene in a run-down area of Havana where men in Maple Leafs and Blue Jays gear were roaming and looking for action in bars and brothels. 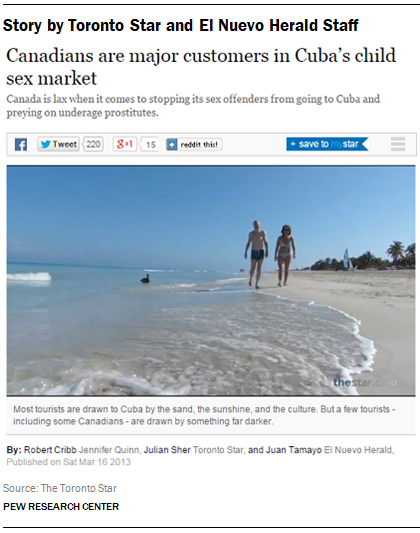 The project, published in March 2013, led to reforms in both Canada and Cuba. Canada has passed much stronger laws making the records of child predators available to border authorities and shutting down at least some of the most frequent tourists. Embarrassed Cuban authorities acted to clean up the neighborhood, scattering, if not fully dismantling the trade. The joint investigation won a top prize from Beyond Borders ECPAT Canada, a Canadian group that is part of a global network focused on curbing sexual abuse of children.

Brokering the deal might sound as easy as picking up the phone – but that’s not exactly how it happened.

Rob Cribb, chief of the Star’s high-profile investigative unit, and Manny Garcia, then editor of El Nuevo Herald, went way back. Both had long been active in Investigative Reporters and Editors, Inc. (IRE), an organization dedicated to improving the quality of investigative reporting, having spent time together on the IRE board.

So trust and a shared zeal for investigations were already established. Garcia recalls that he began by sending ace Cuba reporter Juan Tamayo to “hang out for a week in Toronto,” getting to know Cribb’s operation and how the investigative project was shaping up. Later Cribb, Tamayo and a photographer spent a week in Havana for the on-the-ground portion of the reporting.

The two parties covered their own expenses, and there was no pressure to monitor or equalize costs as the project developed. While the findings were arguably of bigger benefit to the Star, Garcia disagrees. “For us, anything important we can find out and print about what’s happening in Cuba is a top story. It’s like the Star covering the NHL.”

The help with language and maneuvering around reporting restrictions, Cribb says, resulted in a revelatory rounded piece that “was a thousand times better than the standard ‘Toronto man arrested …’ treatment.”

The special circumstances of the project may make it unlikely that the partners will craft an encore. But typical of collaborators profiled in these case studies, both Cribb and Garcia are avid on the benefits of partnering and jump at opportunities to do so.

Garcia (who has since moved on to edit the Naples Daily News) says that during the same time frame El Nuevo Herald teamed with the local CBS affiliate in Miami for a joint investigation of corruption in the small city of Sweetwater, Fla. Ultimately a number of officials were indicted. He recalls an afternoon sitting at a Starbucks with his TV counterpart, exchanging print and TV script drafts in two languages.

In a general way, Garcia says, this sort of partnering has allowed El Nuevo Herald, a comparatively small paper with a news staff of 54, “to play above our fighting weight.”

The Star, a bigger venture that competes both locally and nationally with the Toronto Globe and Mail, has crafted partnerships with the Canadian Broadcasting Corporation and Radio-Canada on other projects and collaborated on an investigation with the Washington-based Center for Public Integrity.

“The natural instinct (for an investigative reporter) is not to share your documents with anyone else,” Cribb says, “but I have come around 180 degrees on that. There is no downside except ego. And who really cares in the end whether it’s a shared byline.”

But he also concedes “not every one (of the collaborations) we have tried has worked. You are not always calling your pal in Miami.”