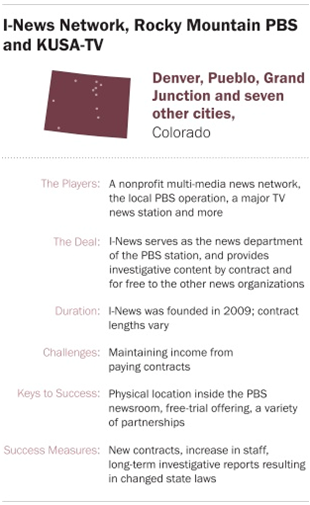 Laura Frank’s idea for a multimedia investigative network in Colorado was born in February 2009, the day the Rocky Mountain News closed. An experienced investigative reporter who led a small team at ‘the Rocky,’ she wanted to keep doing what she did best and also cushion the abrupt end of the paper’s contributions in Denver, a city with a rich investigative tradition.

Called the I-News Network, Frank has built what began as a$40,000 grant and a one-person operation that gave its content away for free into a team of 12 writers, editors, and producers, a budget of about $700,000, and over 100 media partners including the market’s top-rated commercial station, Gannett-owned KUSA. And in January 2013, I-News transitioned from being a content partner with the Rocky Mountain PBS and its flagship Denver station KRMA to being its official news department. The demonstrated capacity, in turn, helped land a two-year $1.4 million grant from Corporation for Public Broadcasting for an “Inside Energy” project that reaches out through Colorado and beyond state lines to include other public media in Wyoming and North Dakota. Currently four of the dozen I-News staff are devoted to that project—an executive editor, a data journalist, an engagement specialist and a reporter who can produce for print, radio and TV.

While there are still clear goals to reach, I-News looks to be a model of how to build a high-impact non-profit news operation—without the advantage of having a single big benefactor like Herb and Marion Sandler have been for the nonprofit investigative news outlet ProPublica.

Frank remembers the early days of I-News as very modest. She won a $40,000 Scripps fellowship that allowed her to develop and test business models. As the venture moved out of the academy into the real world, Frank recalls a faintly comic launch at a state press association conference.

An executive editor, a data journalist, an engagement specialist and a reporter who can produce for print, radio and TV. The unit also employs:

“I had myself set up at a little table with a sign that said ‘free content.’ My pitch to the editors was that we were going to open a state conversation on important topics … and do you want to be on the inside or the outside of that conversation?” She also promised that the work would be good enough “that eventually you will want to pay for it.” The project was conceived as business-to-business rather than direct to news consumers, and in the end, the free trial approach paid off, though it was not without struggle.

After the free trials, I-News landed a few paying contracts with Colorado newspapers, but not nearly enough to sustain the news effort Frank hoped to build. A sudden budget cut wiped out a paying contract she had been developing with The Denver Post. But the early work and its widespread dissemination did attract a $300,000 grant from the John S. and James L. Knight Foundation (its largest award in a challenge competition for community news sites) along with substantial support from other national and regional foundations.

Early on, Frank made a second valuable decision. She needed office space as she added reporters. Rocky Mountain PBS had extra room and agreed to house the venture for free.

That proximity made it easy to bring some of the team’s projects into news specials or discussion forums. It also made it easier to build trust with a station in need of additional reporting power.

General Manager Harris Ravine and CEO Doug Price took over Rocky Mountain PBS in early 2009, and “inherited a situation where we were struggling,” Ravine said. Similar to the pressures faced by other public broadcasters, technology was shifting, membership was declining and federal support was waning too. The station and affiliates had no digital presence or local news staff to speak of.

Through I-News, the stations got an early jump on a national movement to reposition local PBS stations, ultimately made official in the November 2013 commissioned report “Public Media Models of the Future.” Its top recommendation was to tap the “great potential” of creating a strong local news presence.

Ravine said that he and Price explored several possible collaborators but settled on Frank. Her brand of investigation aims for depth and makes heavy use of data-mining. But she also favors a style of presentation that encourages community conversation and action rather than just sparking outrage or prescribing a fix. Ravine and Price found that congenial.

“Over a couple-of-year period,” Ravine said, “we came to define our mission as being the media part of the non-profit community.” The I-News approach to projects was ideal—“put facts on the table, build understanding as well as awareness and let the community come to a decision rather than advocate a solution … Laura’s vision of public service journalism matches ours.”

While there is no contractual definition of what the unit delivers, Frank said that she aims for one or two major projects a year, a monthly in-depth report and a steady run of daily posts and feeds to radio partners.

Ravine said that the journalism is on track but that it is still early to declare victory. “We need to enhance the monetization” he said, “and the jury is still out on how well we can do that.” Most likely, say Frank and Ravine, that will include developing some paying partnerships but also leveraging successful projects to increased underwriter, foundation and member/viewer support.

“To date, we have no NPR outlets paying for our content,” Ravine explained. “We do, however, have shared reporter relationships with several and are in the process of developing similar relationship with others.” This model, Ravine adds, “allows us to both extend our coverage areas with a lower investment and increase our distribution. This in turn is generating underwriting interest which supplements the foundation support that has largely fueled our venture to date.”

From Frank’s point of view, the merger had another clear-cut financial benefit—tapping into an existing member base of 60,000 viewers instead of trying to build that leg of a revenue mix on her own.

With the shared mission of public service journalism, exclusivity was not a part of the deal, allowing Frank to continue to develop new partnerships which she says now number more than 100, including nearly all of the state’s daily newspapers and public radio stations as well as small ethnic outlets. The majority still get the work for free.

The collaboration with KUSA (Channel 9), built around daily investigative reports for the general public, provides a little less than 10% of the unit’s budget, Frank said, and will run well into six figures over a period of years. 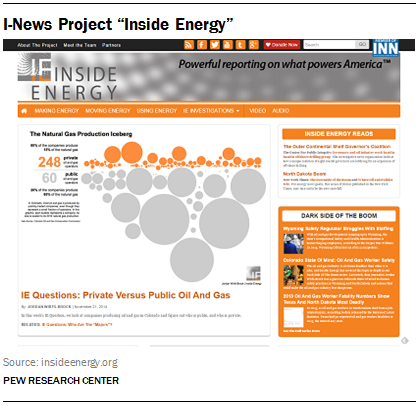 In return, I-News times releases of its major reports to coincide with the three-times-a-year ratings sweep periods and gives KUSA first crack at adapting and expanding the reports. The unit also provides KUSA at least one piece a month. “They’re good at taking what we would think of as a story and building it into a continuing series,” Frank said. And exposure during the ratings period splash, she added, helps attract attention to the longer print versions of those pieces.

It is also regarded as a success from the TV station’s viewpoint. “We have found that they are so easy to work with,” said Nicole Vap, executive producer of the station’s investigative unit. As an example, she said, one of her reporters had developed a particular interest in hit-and-run accidents and wanted to spotlight the problem through the year.

“Bert Hubbard, their data person, was able to provide great information—how often and where they happen, how many people are hurt,” Vap said. And the database stays updated and can be used as a reference point when a new accident pops up in the news. Changes in state law have resulted, with the electronic “alert” signs for missing children and seniors now used as well to locate vehicles that flee the scene of an accident.

“I view us as giving their work a megaphone (to a large general audience),” Vap said. “Their shows (on PBS) are more watched by the decision-makers. So it is a win-win.” KUSA now has a multi-year contract with the I-team.

At a time when many markets provide a ratings-friendly version of investigative reporting that is little more than resolving consumer complaints, Frank said, “that’s not what we are doing … The response has been quite something. If we are inspiring people to take action, we are doing our job.”

Frank cites a multi-year project titled “Losing Ground” as an example of the unit’s best work. Based on a deep dive into census data, it found a huge increase in child poverty, concentrated almost totally in the state’s black, Latino and native populations. Prospering and growing, Colorado has a particularly weak record of extending benefits of the boom to lower income populations.

Versions of I-News work appeared as a multi-part newspaper series—above the fold in a large majority of the state’s papers including the Gazette of Colorado Springs, The Coloradoan in Fort Collins and The Daily Camera in Boulder. It also was reconfigured as a half-hour PBS documentary and an e-book. For a 2014 sequel, the team did a similarly sweeping project called “Untreated,” on lack of appropriate care for the mentally ill.

I-News has capacity to produce and narrate its own segments, but is also comfortable handing off to reporters or presenters at partner affiliates. Sometimes that is still needed, Frank says. “The Rocky had 200 people and a $20 million a year news budget; we have 12 people and about $700,000.”

Projects like “Losing Ground,” “Untreated,” and “Inside Energy” are notable. How Frank, along with her PBS and commercial partners developed I-News from the germ of an idea into a working unit with statewide impact may be even more significant to the challenge of keeping strong journalism flowing in the era of business model transformation.

Are there particular keys to success, worth emulating? Frank cites three: (1) significant start-up funding, in her case a three-year grant from the Knight foundation and the Ethics and Excellence in Journalism Foundation insuring they would be around; (2) hiring top investigative reporters, since ambitious goals could not be met relying on freelancers; and (3) aiming for impact and engagement.

Next: The Texas Front-Page Exchange
← Prev Page
Page1Page2You are reading page3Page4Page5Page6
Next Page →