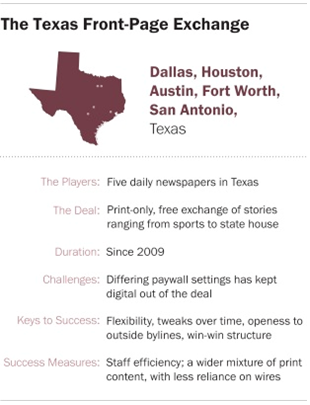 Three of the five case studies in this group feature the contributions of non-profit start-ups. But established news businesses also are fully capable of constructing news collaborations that work on their own.

A specific news event marked the beginning of a new era of cooperation among the five largest newspaper organizations in Texas, once a bastion of swaggering competition. The Center’s 2009 State of the Media report described the circumstances as follows:

In August 2008, a big regional story created an unusual moment for Texas’s two largest papers, the Dallas Morning News and the Houston Chronicle. A church bus carrying Vietnamese Christian children from Houston to a religious retreat in Missouri crashed north of Dallas, killing 15. In flush times, staff from each paper would have leapt into action, fanning out to create a complete and multiday package of coverage.

Instead, editors at the two papers with different owners agreed informally to share content. Houston would emphasize stories of the families and church. Dallas would focus on the crash and subsequent investigation. Supplemented by Associated Press photos, each paper had comprehensive coverage for several days without having to send a reporter across the state.

Bob Mong, longtime editor of the Dallas Morning News, recalls that it was only a few months later that he and other editors of Texas dailies hit on an idea for sharing stories, bolstering state coverage that was endangered when big newsroom cuts became necessary.

Eight Ohio dailies had already started a news collective, motivated in part by dissatisfaction with the high cost and some coverage gaps in their Associated Press service. Mong and his counterparts at the Houston Chronicle, Austin American Statesman, Fort Worth Star Telegram and San Antonio Express News decided to adapt the model in early 2009. 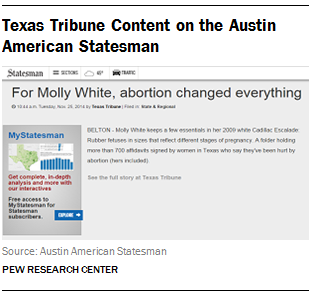 They call it the front-page exchange, and the mechanism is simple. Late morning or early afternoon after daily planning meetings, each paper moves the others its tentative story list for the next day’s front page. If an editor sees something good, he or she can follow the story’s development through the day and slot it into the following day’s paper.

No money changes hands, and no records are kept of who contributes most. From the viewpoint of the participating editors, that doesn’t matter—the exchange simply provides worthwhile added content.

“Several times a week,” Mong says, “we see something that has not been on the AP wire. It is very functional, very helpful, and very useful.” As a recent example, Mong said, he liked a strong story from the Houston Chronicle on parents who had accidentally backed a car over a child. He put it in the next day’s edition, gaining “a 12-hour jump” on the alternative of waiting for a truncated wire service pickup.

The arrangement is old-fashioned in that it applies only to print. Digital versions are handled with a short summary and a link to the original.

The same basic arrangement has been in place for five years now. There have been a few hiccups, but the papers not only kept it going but also expanded with other sharing arrangements. Now, the Austin bureau chiefs and editors of the five papers as well as the Associated Press hold regular planning conference calls. It also makes sense for papers to feed college sports coverage from their home town universities to the others who would need a writer to travel some distance to get a comparable story.

What stood in the way of this sort of cooperation for decades was industry prosperity, big newsroom budgets and a tradition whose definition of quality began with running only the work of your own staff along with wire stories.

But particularly after papers scaled back any statewide circulation ambitions as hard times set in, there came to be very little competition for audience among the five.

Other editors share Mong’s view that the cooperation, while not central to editorial strategy, is a distinct plus. Nancy Barnes came to the Chronicle in October 2013 after years at the Star Tribune of Minneapolis and began as a skeptic. “I was surprised—giving away all that content for free? But in fact these are all very distinct markets. The exchange helps us avoid redundant effort. It seems a very innovative solution.”

Jim Witt, executive editor of the Star-Telegram in Fort Worth, like Mong, was one of the founders. “It has worked great,” he said. “We have a lot fewer reporters than we once did and don’t do much statewide anymore. We used to have a six-person Austin bureau, but now we just send someone during session (bi-annual in Texas) and rely on the Statesman the rest of the time.” That may result in slightly less coverage and less focus on Fort Worth angles, but Witt accepts the tradeoff as realistic given the need to downsize news operations.

The pool of potential collaborators has grown deeper with the emergence of The Texas Tribune. The Tribune is not a party to the exchange, but is a well-funded, well-staffed non-profit based in Austin delivering a separate source of deep state government coverage, heavy data analysis and investigations. “We probably use their stuff more than any of the other papers,” Witt said. “It’s free, and several of our former reporters whose work we respect are on their staff.”

Outside the boundaries of the front page exchange, the Morning News and Star-Telegram, 50 miles apart, have tried a number of two-way collaborations. Both Mong and Witt see some irony in that. In the late 1990s, the Morning News essentially invaded the Star-Telegram’s turf, launching new editions in the populous suburban area between the two. The Star-Telegram, under Disney ownership at the time, got the entertainment giant to spring for a massive staff expansion that left Fort Worth the best-staffed metro in the country (measured by staff/circulation ratio).

That newspaper war is long over. “We have a great relationship with them now,” said Mong. An experiment with pooling coverage of baseball, basketball and hockey franchises did not ultimately succeed. It was complicated by an incompatibility of paywall strategies, and the two editors decided that, while the exchanges work for high school and college sports, they needed their own stamp on professional sports coverage. (The Cowboys had been excluded from the deal for that reason). But it was worth a try, both editors agree.

The Morning News now prints the Star-Telegram, and Mong said that he was able to juggle production schedules to get his former rival an hour later deadline for high school sports. Witt said that he is happy to share coverage of events west of Fort Worth if the Morning News is interested.

Like a number of the editors in these case studies, Mong has grown to be a believer and explorer of multiple collaboration options. He has done work with public radio and broadcast and has recently changed commercial TV affiliations as his partner station passed from ownership by sister company, Belo, to Gannett.

Several of the broadcast exchanges involve sports. Morning News reporters appear as on-air commentators and a prep sports writer does a radio simulcast Friday nights. In addition, a KERA public radio host does a monthly Q&A feature on a commentary section while the paper’s cinema critic does a weekly program for KERA. Mong has also added two arts critics and a physician-turned-medical-reporter by arranging joint appointments with area universities and splitting costs with them.

Quite simply, Mong says, partnering is a way to get more done at less cost, extending the brand and reaching a wider audience at the same time.