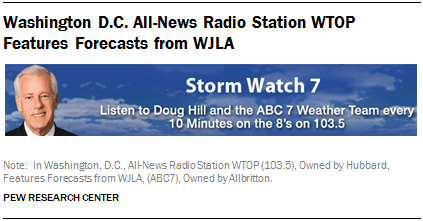 Local TV stations aren’t just sharing content with other television outlets these days. Of the 78% of stations providing local news to other media, more than a third say they provide content to a local radio station, and a quarter say they have cooperative newsgathering or coverage agreements with a local newspaper, according to the annual Radio Television Digital News Association survey. (For more on Local TV News Stations Providing Content to Other Media see the Media & News Indicators Database) In many, if not most of these cases, the television station shares weather forecasts or online video in exchange for promotional value and access to the other medium’s content. The number of cross-media partnerships has held steady for several years and there is no indication that any major expansion is on the horizon. The number of stations that were not involved in a cooperative venture and were planning or discussing one has declined for the past three years, from almost 29% to just 16%.69

A typical partnership is the one The Baltimore Sun, owned by Tribune, has had with CBS-owned WJZ since 2008. The newspaper features forecasts from the TV station in print and uses video from the TV station on its website. The station gets advance access to The Sun’s top stories and promotes them on its newscasts.70

A few collaborations are considerably broader and deeper, like an arrangement that The New Orleans Times-Picayune made with WVUE, the Fox affiliate, in 2013. The TV station provides weather and video to the newspaper, print reporters appear on television and the two outlets’ investigative journalists collaborate on in-depth reporting projects.71 During the November 2013 television ratings period, for example, the two outlets reported on the results of “hundreds of research hours crunching campaign data” to reveal the biggest donors to Louisiana candidates and their impact on elections.72 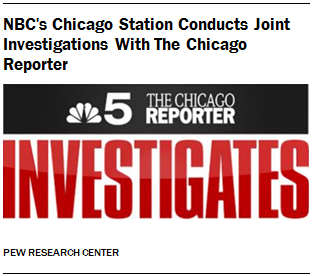 Another New Orleans station, Gannett’s WWL, made a similar agreement to conduct joint investigations with The Baton Rouge Advocate,73 which moved into New Orleans in 2012 to more directly challenge the Times-Picayune. Both moves came after The Times-Picayune cut its print publication to three days a week and laid off staff.

NBC-owned local stations in six markets have formal partnerships with nonprofit news organizations, an arrangement Comcast agreed to in order to win government approval of its purchase of NBC in 2009. The partnerships range from story development and production to promotional assistance; most involve in-depth or investigative reporting. NBC provides some financial support to its nonprofit partners, although the company will not say how much.

These partnerships have produced enterprise stories on a range of topics not often covered by local television news. In a joint investigation with The Chicago Reporter, WMAQ looked at the high volume of criminal cases dismissed by the Cook County Circuit Court.75 WTVJ in Miami reported the results of a Florida Center for Investigative Reporting project on banks failing to protect consumers from ATM crime.76 And WNBC in New York collaborated with ProPublica on an investigation of wage violations by temp agencies.77

Voice of San Diego CEO Scott Lewis says his nonprofit’s partnership with the local NBC station is a win-win, allowing his news organization to reach a wider audience and “positively impacting the quality of [KNSD’s] product while also performing a public service.”78

Public broadcasting stations also have partnered with local nonprofits, in some cases creating news operations they never had before. Rocky Mountain PBS, in Colorado, for example, now gets news from the nonprofit investigative journalism outlet I-News. In San Diego, the public television station invited a nonprofit investigative outlet to move into its newsroom to work jointly on enterprise coverage.79 A similar arrangement went into effect last fall in Boston, when the New England Center for Investigative Reporting moved its professional newsroom to public TV station WGBH. The New England Center also has a partnership with four commercial stations in the region owned by Hearst that air stories produced by the nonprofit center.80

Next: Regulation
← Prev Page
Page1Page2Page3Page4Page5Page6Page7You are reading page8Page9
Next Page →