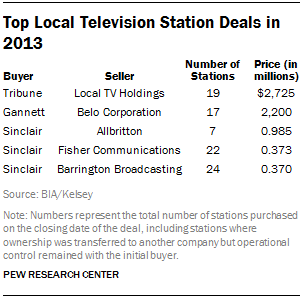 Many of the 290 TV station purchases in 2013 occurred as group acquisitions by some of the largest owners, building their portfolios of stations even more.10 The Tribune Co. emerged from bankruptcy to make the richest single deal, spending $2.73 billion to acquire 19 stations from Local TV Holdings.11 Gannett completed a $2.2 billion transaction to buy 17 stations from Belo Corp., almost doubling Gannett’s TV holdings and giving it national reach.12 Twelve stations changed hands when Media General merged with New Young Broadcasting.13

Sinclair Broadcasting acquired more individual stations than any other buyer, snapping up outlets owned by locally based companies like Fisher Communications in Seattle and Allbritton Communications in Washington, D.C. The company already owned the most local stations of any group; if all pending sales go through, Sinclair will own or provide services to 167 television stations in 77 markets, reaching almost 40% of the U.S. population.14 Nexstar Broadcasting made moves to increase its portfolio to 108 stations in 56 markets. In 37 of those markets, it will own or provides services to more than one station.15 Nexstar’s chief executive, Perry Sook, predicted the “rolling M&A thunder” would continue throughout 2014, and it has.16 In March, Media General announced plans to buy LIN Media’s 43 stations for $1.6 billion.

Other broadcast executives also expect the market to stay hot. Speaking at the UBS Media Conference in New York last December, Sinclair CEO David Smith predicted that the current rush of consolidation would last another year or two. And he made clear what his ultimate goal would be: “I’d like to have 80 percent of the country if I could get it. I’d like to have 90 percent.”17 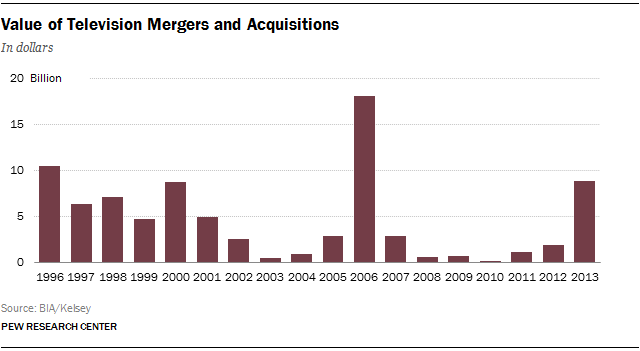 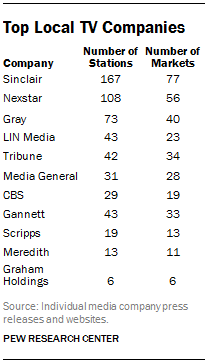 The buying binge continues despite federal limits on station ownership. The FCC currently prohibits one company from owning more than one of the four top-rated TV stations in a single market.18 But there is no rule prohibiting broadcasters from managing more than one station per market. Many of the deals agreed to in 2013 took advantage of that loophole. Companies that made deals to buy groups with stations in markets where the rules would prohibit joint ownership arranged to spin off those stations to other owners but retained effective control through joint operating agreements.19 “Essentially, side-car companies or license holding companies are formed to hold the license, but the primary or ultimate parent in the case is actually operating the station,” said Justin Nielsen of SNL/Kagan.20

Broadcasters say these agreements are entirely within the boundaries set by the FCC. “I can walk right up to that line and look right at that line,” said Sinclair’s Smith. He calls the arrangements “necessary for survival,” given the increased competition broadcasters face from cable and the Internet.21 Owning or providing services to multiple stations in a market provides “efficiencies and economies of scale,” said Tribune vice president Larry Wert.22

The savings from large-scale consolidation can run into the millions of dollars. Gannett estimated its acquisition of Belo would net the company about $175 million a year within three years after the deal closed, mostly from reduced corporate costs and higher income from retransmission fees paid by cable and satellite systems that carry its local channels.23

Next: Impact of Consolidation on TV Economics
← Prev Page
Page1You are reading page2Page3Page4Page5Page6Page7Page8Page9
Next Page →