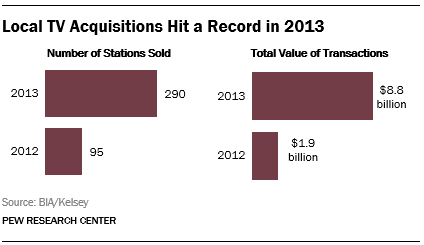 Local television in the U.S. saw massive change in 2013, change that remained under the radar of most Americans. Big owners of local TV stations got substantially bigger, thanks to a wave of station purchases. While the TV business profited, the impact on consumers is less clear and seems to vary from one market to the next. Still, the rapidly spreading practice of separately owned stations being operated jointly drew criticism from consumer groups and new scrutiny from federal regulators.

Almost 300 full-power local TV stations changed hands in 2013, at a cost more than $8 billion. The 2013 total of 290 is 195 more stations than in 2012 and more than four times the dollar value.1 Many of the deals resulted in stations in the same market being separately owned on paper but operated jointly, a practice that has grown exponentially in just the past two years. Joint service agreements of one kind or another now exist in at least 94 markets, almost half of the 210 local TV markets nationwide, and up from 55 in 2011.2

The impetus for most of these acquisitions and operating arrangements is economic but it also has an effect on the local news that audiences receive. One measurable impact has been fewer stations originating local news content. That number has dropped by 8% since 2005. Fully a quarter of the 952 U.S. television stations that currently air local newscasts do not produce the programs themselves; another station provides them, according to research that Bob Papper published in 2013 for the Radio Television Digital News Association.3

Other types of news sharing partnerships are also on the rise. Stations owned by the same company now routinely share news content regionally or groupwide. In some of the largest markets, local news services produce coverage for two or more competing stations. And more than three-quarters of local TV stations say they share news content with other media, including radio stations and newspapers, according to the most recent survey by the Radio Television Digital News Association.4

The economic benefits of station consolidation are indisputable and include the increase in retransmission fees paid to station owners and the boost in stock prices of companies on buying sprees. But the effect on the quality of news coverage consumers receive is far more complicated to assess.

Advocacy groups say station consolidation is depriving communities of the diverse sources of news they need to stay informed. “The original deal was [broadcasters] get free use of the public airwaves, you get the opportunity to make a nice living off of that, but in return you must serve the public interest,” said former FCC commissioner Michael Copps, now with Common Cause. “They’re public airwaves and they’re supposed to be serving community interests and local markets, not one-shop news operations that span many outlets.”5

And while the total number of people working in local TV news is at a near-record high, so is the amount of news their stations air. The average hours of weekday news programming actually declined slightly in 2012 (by six minutes), but that follows four straight years of increases and is still 46% higher than in 2003. What’s more, newscast time on weekends expanded by more than 11% on Saturday and 5% on Sunday, from 2011 to 2012.7 Another area of increase has been in the very early morning time slots. Stations airing news at 4:30 a.m. increased 11% in 2013 to 271, up from 245 in 2012, according to Nielsen data. Those stations cut across 120 markets, up from 113 in 2012.

“You can argue that every time you add an outlet, that unless you add a commensurate number of staff people then you’re just spreading yourself thinner and thinner,” Papper said. “You could probably make an argument that there is a bigger toll being taken by spreading out the news on more and more outlets and in more and more newscasts than there is by consolidation.”8

The FCC, the regulatory body that oversees broadcasting, heard dozens of complaints about TV consolidation in the past year as it continued a long-delayed review of the rules governing station ownership. While no action has yet been taken, broadcasters fear the agency will crack down on joint operating agreements. Early in 2014, the Justice Department warned that the practice could allow station owners to “influence or control” competitors and should be more tightly regulated.9

In this report we examine the details of the massive rise in acquisitions–a phenomenon that flies under the radar of the average local television news viewer–the incentives behind them and the ramifications for the consumer.

Next: A Surge in Local TV Acquisitions Puts More Stations in the Hands of a Few
← Prev Page
You are reading page1Page2Page3Page4Page5Page6Page7Page8Page9
Next Page →