One year into Francis’ papacy, an analysis by the Pew Research Center finds that the former Jesuit archbishop – who was named Time’s Person of the Year – ranked among the top global newsmakers in major U.S.-based digital news outlets.1 Media interest in Francis was intense upon his election in March 2013, but it peaked four months later, in July 2013, around the time of his trip to Brazil for World Youth Day. On his flight back to the Vatican, Francis made headlines worldwide when he was quoted as responding to a reporter’s question about gay priests by saying, “Who am I to judge?”

On Twitter – where the tone of conversation often takes a more negative turn – the new pope, who has more than 3.7 million followers, enjoyed mostly positive treatment. An analysis of the Twitter conversation over the course of Francis’ first year finds that positive discussion about him outweighed negative discussion by a ratio of five-to-one. By contrast, Twitter conversation about Benedict during his final 12 months in office tended to have a negative tone. Indeed, there were more than twice as many negative comments as positive ones about Benedict on Twitter in the year before he resigned.

By any measure, Francis – in his first year as the bishop of Rome – brought renewed visibility to the papacy.

To assess how much, researchers used General Sentiment technology to measure the number of digital media references to Francis and compared his coverage to a selection of other well-known global figures during the same time period (March 13, 2013-Jan. 31, 2014).2 In terms of media mentions, Francis ranked behind only such international figures as U.S. President Barack Obama, South African leader Nelson Mandela, who died in December 2013, and Syrian President Bashar al-Assad. 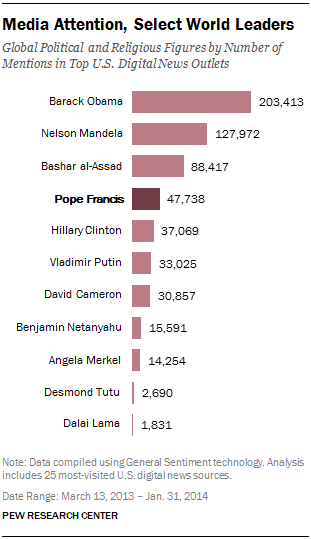 How did Francis’ level of media attention compare with that of Benedict? Digital news archives going back to Benedict’s election as pope on April 19, 2005, are not readily available. But an analysis of the final two years of Benedict’s papacy shows that he was the subject of far less coverage at the end of his tenure than Francis received in his first year.

In his last two years as pope, Benedict was mentioned 18,317 times per year, on average, in the roughly two dozen digital news sources studied by Pew Research using General Sentiment technology.3 That amounts to just 38% of the 47,738 media mentions Francis received in his first year as pope.

There was a spike in interest in Benedict in February 2013, when he announced that he was resigning as pope. In addition, the former pope drew international media attention when he traveled to Germany in September 2011 and to Latin America in March 2012. And he made headlines for some public statements during the final two years of his papacy, including a prayer for diplomacy in Libya (April 2011) and an appeal for world peace (December 2011).

How did Francis’ year of intense media scrutiny compare with Benedict’s first year (2005-06)? Because the media environment has changed substantially in the past eight years, it is difficult to make exact comparisons.

But past Pew Research analyses of Benedict’s papacy suggests that the former pope generated significant amounts of coverage at times.4 For instance, Benedict’s six-day visit to the United States in April 2008 accounted for fully 37% of all religion-focused news coverage during the entire year.

In 2009, two of the top five religion-focused stories in the mainstream media centered on Benedict’s activities, including his visit to the Middle East that year and his pardon of a controversial bishop who had questioned the number of Jews killed in gas chambers during the Holocaust.

And in 2010, the clergy sexual abuse scandal in the Catholic Church reemerged internationally, largely centered on Benedict’s role in addressing the issue. It accounted for about 19% of all religion coverage that year, making it the year’s No. 2 religion story.

Much of Francis’ first-year coverage came in bursts of attention, focused around key moments rather than in a steady stream of news stories.

Scheduled events drew high rates of coverage, including Francis’ first celebration of a Mass as pope (March 14, 2013), and his first foreign trip (to Brazil in July for World Youth Day). But at no other point did papal coverage spike as high as when Francis offered a comment about the role of gay and lesbian people in the church.

On July 29, the pope answered reporters’ questions for more than an hour on his flight from Brazil back to the Vatican, during which he posited, “If someone is gay and he searches for the Lord and has good will, who am I to judge?” In that month alone, Francis appeared more than 14,000 times in the news sources studied – nearly twice as often as in the later weeks of March, when he was introduced to the world as the new pope.

There was a similar, though smaller, spike of interest in Francis when he laid out his vision for the Catholic Church and his papacy in an interview with Antonio Spadaro, editor in chief of La Civilta Cattolica, published in September. In the interview, conducted on behalf of several major Jesuit publications from around the world, Francis suggested that not all moral teachings of the church are equivalent and that he wanted to “find a new balance.” Although he did not directly mention abortion, gay marriage or contraception in that context, he had referred specifically to those three issues slightly earlier in the interview: “We cannot insist only on issues related to abortion, gay marriage and the use of contraceptive methods. This is not possible.” 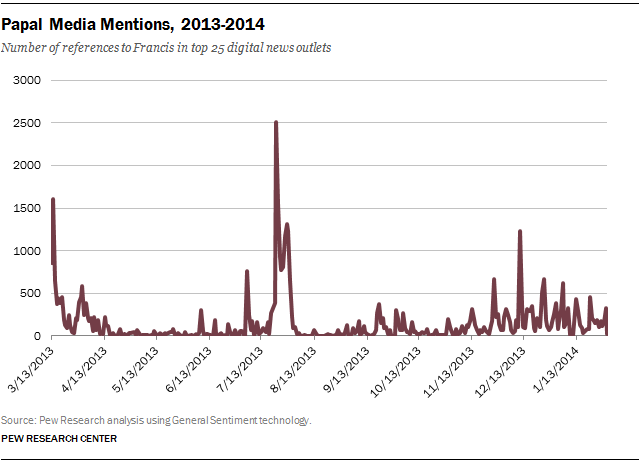 The new pope made headlines once again in December, when both Time and The Advocate (a publication aimed at the LGBT community) named him Person of the Year. Francis was mentioned more than 7,000 times that month, about the same as the month he was elected pope.

The Social Media Conversation about the Pope 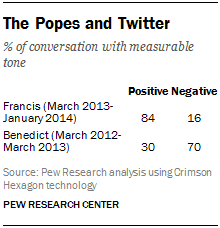 In his first year, Francis has been received warmly by the public and Catholics alike. But how has Francis’ image played out on social media? An analysis of the Twitter conversation between March 2013 and January 2014 shows a largely positive tone, and one strikingly more positive than that of Benedict in his final year. The positive nature of the discussion about Francis also stands out given a past Pew Research analysis showing that Twitter conversations have a tendency to veer negative.

A Pew Research examination of Twitter using Crimson Hexagon technology yielded roughly 8 million relevant tweets involving Francis during the period studied. The vast majority of the conversation (85%) about Francis was neutral in tone. Much of it can be attributed to users sharing pieces of news or information about the new pope, or simply referring to Francis in a generally neutral way. (Indeed, past Pew Research studies have found that the pass-along effect – which accounts for much of the neutral content in a Twitter conversation – often makes up the largest portion.) But of the remaining portion of the conversation that contained a discernible tone, 84% was positive and only 16% was negative.

Some users commented on Francis’ priorities: “I am Catholic and I like him for the same reason. #Francis cares for all, especially the poor,” tweeted one. Others were more generally effusive: “Yo shoutout to Catholics, they picked a good Pope this time. Good on you guys.”

Contrast that with the Twitter conversation involving Benedict in his final year, which comprised approximately 5 million relevant tweets. Here, a smaller portion of the Twitter conversation about Benedict was neutral (60% vs. 85% for Francis), and the portion that contained a discernible tone was more negative than positive. Indeed, fully 70% was negative, while 30% was positive.

Negative comments about Benedict on Twitter often criticized him for the church’s positions on the priesthood: “If the Pope thinks ordaining women is a ‘grave crime’ he should blame God for making 51% of ppl so unworthy of priesthood.” Others jabbed at his biography: “how fitting the current pope was a former Nazi youth.”

When Benedict began his own social media presence in December 2012, some tweets were more positive. For example: “Pope Benedict XVI joined Twitter! @Pontifex is his handle. (Welcome!) The way we communicate today is changing. Even the #Vatican gets it!”

Next: Pope Francis Methodology
← Prev Page
You are reading page1Page2
Next Page →