As the candidates for president reintroduced themselves at their conventions and began the last phase of the campaign, they received markedly different treatment in social media than in the mainstream press, a new study finds.

The conversation on Twitter, blogs and Facebook about Mitt Romney and Barack Obama during this key period changed little with events-even during the two candidates’ own nominating conventions. The conversation in all of these platforms was also consistently negative, according to the study by the Pew Research Center’s Project for Excellence in Journalism.

In the mainstream media, by contrast, both Romney and Obama received a version of the traditional convention bounce, with coverage about them becoming more positive during the week of their party’s nationally televised gathering.

The media portrait of this key month in the campaign is consistent with what PEJ has seen in social media throughout the campaign. Whether it would prove true in other campaigns cannot be known. But the differences raise a question about whether social media may make what Americans hear about politics more negative and may make it harder for political actors, particularly those trailing in the polls, to alter the media narrative.

On Twitter, for instance, the percentage of negative discourse about Romney was identical during the two convention weeks-and made up the majority of assertions. The level of positive discourse, meanwhile, varied by just two points between the two weeks. On Facebook, the numbers barely budged. There was a more noticeable shift in tone during the conventions, though modest, on blogs.

During his convention, Obama received a modest improvement in the tone of the conversation about him on Twitter, and somewhat less on Facebook and blogs, but the tone in all three venues remained consistently negative. 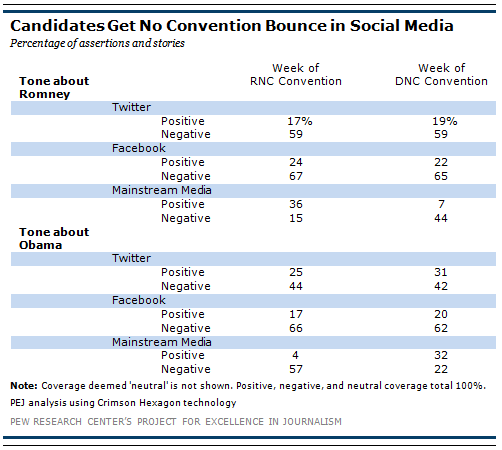 The study also finds that generally more of the discourse has been focused on Obama rather than on Romney. The President has been the subject of more Twitter traffic, more YouTube viewings, more blog and Facebook conversation and even more mainstream news coverage. The only time that changed noticeably-and was likely unwanted-was on Twitter the week that a video surfaced in which Romney derided the 47% of Americans who do not pay income tax.

These are among the results of one-month study of the tone of discourse across 52 mainstream media outlets, the full range of conversation on Twitter, a large sampling on Facebook and in blogs, as well as a measure of traffic on YouTube.

The study examined the tone and volume of news coverage and social media conversation from August 27 to September 23 across a wide range of media platforms. Human researchers studied 1,084 stories in 52 mainstream media outlets-from television, print, radio and news websites. And a combination of human coding combined with computer software from the company Crimson Hexagon analyzed more than 18 million posts on Twitter, 323,000 on Facebook, and 690,000 on blogs. In addition, researchers examined the traffic to key videos of the candidates on YouTube during the same period.

The week of the GOP convention, from August 27-September 2, fully 59% of the Twitter assertions about Romney were negative while 17% were positive. The following week, when the Democrats held their convention, Romney’s numbers were virtually the same, again 59% negative and 19% positive.

These figures for Twitter reinforce what PEJ has seen throughout the campaign season about this growing social media platform. For every single one of the 16 weeks studied since June 4, the tone of the conversation about Romney has been negative-by a differential of at least 34 points.

The settled tone of that dialogue is reflected in the fact that during the week of September 17-23, when the damaging 47% video surfaced, the numbers were nearly the same as the week of Romney’s convention, when Republicans were putting out their most positive messages about the candidate. The week of the video, 62% of the Twitter conversation about Romney was negative, and 14% positive.

Obama did enjoy some bounce on Twitter from his convention, but that proved ephemeral. The week of the Democratic convention, from September 3-9, Obama could boast that the gap between positive assertions about him (31%) and negative assertions (42%) narrowed to 11 points, about half of what it had been the week before when he was being rhetorically pummeled at the GOP convention.

Since then the Twitter conversation about Obama has returned to levels typical of what PEJ has seen throughout the general election period, with negative assertions exceeding positive ones about the president by about 20 points.

And with the exception of the week of the Democratic convention, the tone of Twitter conversation about Obama has been more negative than positive each week since June by a differential of at least 19 points.

The conversation about the candidates on blogs has also been highly negative, and here it is distinguished by how evenly split it was during the conventions. At the time of the GOP gathering, negative assertions about Romney in the blogs studied outstripped positive ones by 22 points (41% to 19%). That same week, the conversation about Obama tilted to the negative by 30 points (45% negative and 15% positive).

Since then, the conversation among bloggers has become worse for Romney. The week after the Democratic convention, the negative to positive gap for Romney grew to 34 points (48% negative and 14% positive). The following week, it increased further, to 41 points (54% negative and 13% positive).

In the case of Obama, the conversation in the blogosphere has remained fairly static since the Democratic convention.

Of the three main social media venues in which the tone of conversation can be assessed by PEJ, the treatment of the candidates has been the most unchanging on Facebook. Here the sample is more limited. All that can be analyzed is a random sampling of Facebook posts that users are willing to have seen publicly. Presumably, that is a conversation that is designed to persuade but may not reflect the full range of what people say to just their “friends” on Facebook.

What was in this space during the month was overwhelmingly negative and barely budged. In each of the four weeks, negative assertions about Romney exceeded positive ones by 43 points-exactly.

There was a little more variation for Obama and a mildly positive trend. During the Republican convention, negative assertions about the president outstripped positive ones by 49 points. During the Democratic convention, that dropped just slightly, to a 42 point negative differential. The last week studied, September 17-23, that had narrowed to 33 points-21% percent positive and 54% negative.

The Volume of Attention on Social Media

Another way of gauging the social media response to the candidates during the convention period is to look at volume, or how much attention was focused on each candidate. Here, there is a clearer distinction between Obama and Romney. For most of the month, most of the attention, whether measured in conversation or in views on YouTube, was focused on the president and Democrats.

On Twitter, Obama was the focus of more than twice as many assertions during the week of the Democratic convention than Romney was during the Republican convention (4.92 million assertions versus 1.98 million). That pattern, more attention to Obama, has held throughout the general election period and all of 2012, even during the period of the GOP primaries.

The two exceptions came just recently. The week of the GOP convention, Romney was the subject of slightly more assertions on Twitter than Obama – 1,975,872 to 1,958,298. The only occasion when Romney was in a significantly larger number was the week of September 17-23 when the 47% video surfaced. That week, there were 2.3 million Twitter assertions about the GOP nominee versus 1.9 million about Obama.

This generally higher focus on Obama is also reflected in the volume on Facebook. During Romney’s convention week, for instance, there was more conversation about Obama than Romney by about 18%. And during Obama’s convention week, the conversation about the president outstripped that of Romney by about 3-to-1, 166,724 assertions compared to 51,762.

And unlike Twitter, even the emergence of the now famous 47% video did not move the focus of the conversation from Obama toward Romney on blogs and Facebook.

The higher interest in Obama and the Democrats in social media is also reflected in the viewership of videos since the two conventions. For instance, through September 21, 2012, Obama’s acceptance speech on various YouTube channels has been viewed nearly five times as often as Romney’s (4.9 million to 1.1 million). And contrary to what some observers might speculate, Obama’s speech has also been viewed more than former President Bill Clinton’s address to the nation, though that speech, in various forms, has been viewed on YouTube nearly four times as often as Romney (3.9 million times to Romney’s 1.1 million). The same pattern can be seen in the numbers as they relate to the wives of the candidates. Michelle Obama’s speech has been viewed 3.2 million times, about five times as often as the one delivered by Ann Romney (563,000). 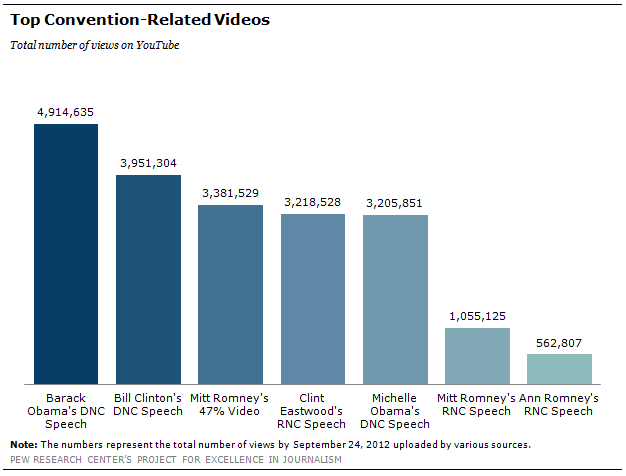 The only major Republican figure to generate more attention than his Democratic counterpart on YouTube was vice-presidential nominee Paul Ryan, whose speech has attracted 457,000 views compared with 173,000 for Vice President Joseph Biden, whose speech was not delivered in prime time.

The only other speaker at the Republican convention to generate major YouTube attention was one that Romney might like to forget. That was actor and director Clint Eastwood’s “empty chair” speech. Since Eastwood’s appearance, that video has been viewed 3.2 million times.

The only GOP video since the convention to be viewed more often than the Eastwood clip was footage of Romney’s 47% remarks to fundraisers, which as of September 24, had been viewed 3.4 million times. That is still less, however, than the president’s acceptance speech or Clinton’s remarks.

The one media platform where the tone of the discourse changed markedly during the last month, and where a candidate managed to generate more positive than negative treatment, however briefly, was in the mainstream news media.

Here, in a sample that also includes cable and talk radio hosts, Romney fared somewhat better during his convention week than Obama during his. 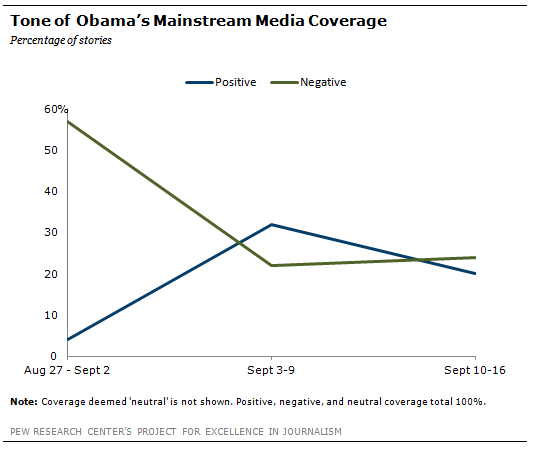 Since then, Obama’s coverage has turned somewhat negative, but is still far better than Romney’s. In the week following the conclusion of the conventions, September 10-16, 20% of the stories about Obama have been positive compared to 24% negative. 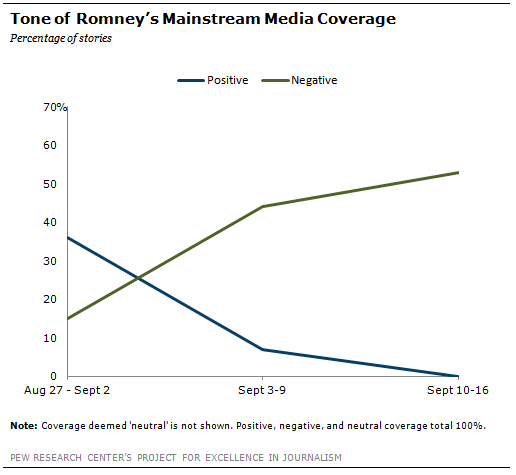 The mainstream press has also given more attention to Obama during this period, even with the negative publicity associated with Romney’s video. From August 27 to September 16, Obama was a bigger newsmaker than Romney, the focus of 667 stories compared with 477 for his rival. [1] And while the number of stories about Romney exceeded those about Obama by more than 30% during the Republican convention, Obama was the focus on more than twice as many stories as Romney during the Democratic convention.