The growing nonprofit news sector is showing some signs of economic health, and most leaders of those outlets express optimism about the future, according to a new study by the Pew Research Center. But many of these organizations also face substantial challenges to their long-term financial well-being.

The report finds that large, often one-time seed grants from foundations help many of these nonprofit news outlets get up and running. But as those grants expire, many organizations do not have the resources or expertise necessary for the business tasks needed to broaden the funding base.

More than half of the nonprofit news organizations surveyed by the Pew Research Center in late 2012 (54%) identified business, marketing and fundraising as the area of greatest staffing need, compared with 39% who said the top need was for more editorial employees. In addition, nearly two-thirds of the nonprofits (62%) cited “finding the time to focus on the business side of the operation” as a major challenge-compared with 55% who cited “increasing competition for grant money.” 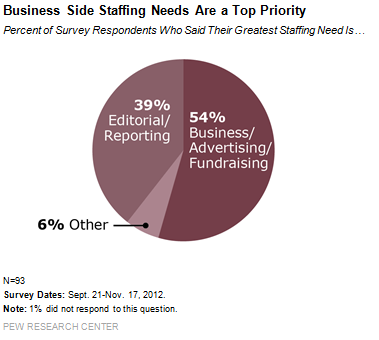 Most nonprofit news organizations are small, with minimal staffs and modest budgets. Indeed, 78% of the survey respondents reported having five or fewer full-time paid staffers-including 26% with none. About one-fifth (21%) said they generated $50,000 or less in annual revenue in 2011, the latest year for which data were available at the time of the survey, and another 26% earned between $50,001 and $250,000. And roughly half of the outlets produced 10 or fewer pieces of original content in the two-week period studied.

Through a multi-step process, the Pew Research Center identified 172 digital nonprofit news outlets that launched since 1987. The sites identified here range from the nationally known to the hyperlocal. Their editorial focus includes everything from investigative reporting to coverage of health and the environment. Two have won Pulitzer Prizes. Their funding sources range from nationally known philanthropic foundations, to ideologically aligned organizations, to individuals. And, as our earlier research in 2011 showed, some fit squarely into the traditions of independent news gathering while others lean more toward what might be considered partisan news.

The classification as a nonprofit, in other words, speaks to the tax status and financial structure of an organization rather than the kind of news produced. This study examines the growing sector largely from that financial perspective.

A detailed survey completed by 93 of the 172 organizations includes some positive economic signs. Most of those that reported revenues and expenses for 2011, the latest year for which data were available, said they brought in more money than they spent. In addition, a majority of outlets reported having cash reserves on hand that experts say are sufficient for the nonprofit sector. That may help explain the high levels of confidence about the future, with 81% of the organizations saying they were very or somewhat confident they’d be financially solvent five years down the road.

At the same time, the self-reported data also reveal the substantial economic challenges these organizations face and the overall fragility of their environment. Given the uncertainty of grant funding, one way these organizations are trying to build financial stability is by diversifying their revenue streams. But revenue diversity is a work in progress, and in what may be most telling of all, many of the nonprofit news operations surveyed told Pew Research that they don’t have the business-side resources needed to effectively expand their revenue base.

Complicating that effort, though, is the broader nonprofit culture-including nonprofit monitoring agencies-that rewards organizations for spending money on program services instead of business and revenue development. “Organizations starve themselves,” says Kate Barr, executive director of the Nonprofits Assistance Fund. “There’s an obsession with being able to say to [funders] that 80 to 90 cents of every dollar you give us is going to programs.”

For this study, Pew Research first took several steps to get as close as possible to the total number of digital nonprofit news outlets in the U.S. that were launched since 1987.[1] First, researchers aggregated lists and databases of digital news operations already in existence. A total of nine such lists yielded approximately 1,800 outlets. Researchers then eliminated duplicate listings as well as for-profit, non-domestic and defunct or inactive outlets. The cohort of nonprofits that are many decades old or that rely chiefly on a non-digital platform, such as Mother Jones magazine or The Associated Press, were removed as well for the purposes of this particular study. This left a total of about 700 outlets. Those were further evaluated to remove outlets that were noncommercial but not formally part of a 501(c) organization.[2] That reduced the number to roughly 150. Finally, researchers conducted web searches for additional nonprofit news organizations. This resulted in a final list of 172 active nonprofit news outlets, ranging from the nationally known brands to the hyperlocal.[3] While there may be some additional nonprofits that have started up since this analysis or were missed even in the deep searches we conducted, we believe this is the most comprehensive analysis of the landscape of digital nonprofit news outlets.

Pew Research conducted a site audit on all 172 outlets and then sent to all 172 a detailed survey asking more about the financial and staffing structure of their organizations. A majority, 93, completed the survey with the understanding that their data would be anonymized, meaning the report would not publicly identify any outlet with its survey responses. The audit characteristics of these 93 tracked closely with the full 172 on the majority of audit measures.[4] (For more details, see the methodology.)

This study builds off of an earlier 2011 Pew Research study of nonprofit news sites, which examined the funding transparency and ideological nature of the news content produced. That study covered a smaller swath of these sites-four dozen sites with a national or state-level orientation launched in 2005 or later. It found overall that the more ideological sites tended to be funded mostly or entirely by one parent organization. The most consistently ideological content appeared in the two formally organized families of sites-the American Independent News Network sites, which had a liberal tone to their coverage, and the Watchdog.org operations, whose content carried a conservative tone.

[1] The study examined outlets that had launched over a 25-year period, 1987-2012. While this allowed researchers to focus on a relatively younger, digital cohort of outlets, longstanding noncommercial organizations such as PBS and NPR were thus excluded from this particular study.

2] Some outlets originally appeared to be nonprofit, but upon closer inspection, may have either simply been independent and noncommercial in nature. Outlets were deemed inactive if their websites had not published any new material in the previous three months.

[3] Included in the 172 is Stateline, a site funded largely by The Pew Charitable Trusts, which also funds the Pew Research Center.

[4] The only areas where the group of 93 stood out as different from the full 172 were fewer sites sponsored by non-news organizations, somewhat less focus on state level and government news and fewer Watchdog.org sites.

Next: The Landscape
← Prev Page
You are reading page1Page2Page3Page4Page5Page6Page7Page8Page9Page10
Next Page →