According to a number of industry experts and analysts, evaluating the financial health and future prospects of a nonprofit organization is more an art than a science. There are few magic numbers or hard and fast benchmarks that define economic health, and a number of factors that contribute to an organization’s financial well-being. 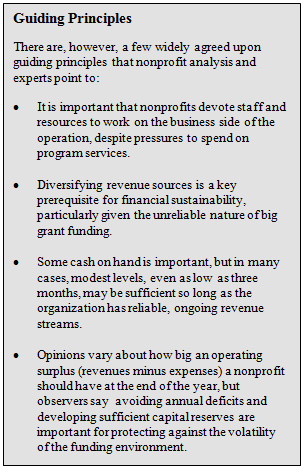 Business-Side Focus: The finding that 62% of the nonprofit news organizations find it hard to make time for business activities does not come as a surprise to nonprofit analysts.

Indeed, experts on the nonprofit sector say this lack of focus on business-related tasks is pervasive, worrisome and exacerbated by a philosophy that rewards spending on program services over spending on business sustainability.

Even though she considers running a deficit to be a "red flag" for a nonprofit organization, Ruth McCambridge, editor in chief of Nonprofit Quarterly, describes the lack of resources devoted to revenue generation as "much more of a problem…I think anybody who is not playing around with emerging sources of revenue at this point is being pretty silly."

But in a way, the lack of attention to business needs is a response to the priorities and culture of the nonprofit sector. Analysts say monitoring organizations rate nonprofits based on how much money they spend on program services as opposed to administrative costs. And they reward them for not spending on business staffing-something these experts view as counterproductive.

Some funders also establish limits on the amount of money that can be spent on overhead. "Organizations starve themselves" by scrimping on business needs while funneling nearly all their money to program expenses, says Kate Barr, executive director of the Nonprofits Assistance Fund.   "There’s an obsession with being able to say [to funders] that 80 to 90 cents of every dollar you gave us is going to programs."

Kevin Davis is the CEO of the Investigative News Network, an organization that, among other things, helps news nonprofits build sustainable revenue models. He is clear about the most important piece of advice he gives nonprofit news outlets about economic sustainability: "Have a business plan, have a P&L [profit and loss statement] and understand what your costs of goods are. It’s the same advice I would give to [a] for-profit startup."

Funding Sources:  The analysts who talked to Pew Research about the nonprofit sector were unanimous in identifying one crucial goal for organizations looking to build a sustainable economic model- diversify revenue streams.

The survey results make clear the significance of major philanthropy in the nonprofit sector. Indeed, 61% of the news nonprofits say they started with a grant that accounted for at least one-third of their initial funding. And nearly three-quarters say they are currently receiving foundation revenue, which in some cases makes up more than 75% of their overall income.

But the nonprofit analysts say these organizations cannot rely on a continuing steady stream of big grants. "As crazy as the earned revenue situation is, it is usually harder to predict the flow of philanthropic money," says McCambridge. "The thing we know about philanthropy is that it is often fad driven and impatient…They see themselves as seeding endeavors."

Big grants are "an unreliable source," adds Barr. INN’s Davis divides income into three basic buckets. One is "big philanthropy," or major grants. Another is "earned revenue," which includes everything from training programs and sponsoring events to advertising. The third is "small philanthropy or consumer revenue." That is money that comes from the communities the nonprofits news outlets serve, be it in the form of small donations or subscriptions. It is this third bucket that Davis thinks has the most growth potential and may end up being the most important in deciding the fate of many news nonprofits.

It is crucial, he says, to have "a brand that your target community appreciates and supports."

The survey provides evidence that nonprofits are generating income from individual donations. But, as stated above (LINK), individual donations comprise a small portion of most outlets’ revenue. Of the outlets that provided detailed information about their revenues, a majority (36 out of 60) said that foundation grants accounted for more than half of their overall revenue in 2011. By contrast, only a small portion of the outlets said that individual donations (nine out of the 63 that provided information) accounted for a majority of their overall revenue that year.

Cash Reserves: In the survey data collected by Pew Research, there was a fairly wide variance in the amount of cash reserves reported by nonprofit news organizations. One-third of the organizations (32%) reported having less than six months’ worth of cash on hand, roughly another third (31%) reported having between six months and a year, and another third (33%) said they have enough cash on hand to operate for a year or more without additional income.

While some of those numbers might be worrisome if applied to the for-profit sector, analysts say that they seem pretty robust for the nonprofit sector.

Charles Lewis, the founder of the Center for Public Integrity and the Investigative Reporting Workshop at American University, says it’s not unusual for a nonprofit to have very little cash on hand.

"The younger your group is, the less established your group is, you have almost no cash on hand," he adds. "You live hand to mouth." Given the relative youth of most journalism nonprofits, Lewis says he would expect cash reserves to be relatively small.

"There’s not an absolute yardstick," for what constitutes healthy cash reserves, adds Kate Barr of the Nonprofits Assistance Fund. But she does characterize the finding that two-thirds of the nonprofit news organizations had six months or more as "kind of stunning" and considerably better than average for the nonprofit sector.

McCambridge of Nonprofit Quarterly adds another wrinkle. She says the key to interpreting cash reserves is knowing an organization’s prospects for reliable future funding. The more steady and certain the flow of income, the less critical it is to have big reserves. And in some cases, cash on hand, according to McCambridge, could imply "a conservatism when it comes to investment in the financial base of the enterprise."

Some things to consider, then, are how long an outlet has been in existence-newer nonprofits haven’t had time to build up large reserves-whether they expect additional grants to come in, their business-side investments and whether they are operating in the red or in the black.

Operating surplus: Experts also say that while there is no magic number for appropriate surplus margins (which ultimately will be invested back into the organization) and one year does not tell the whole story, running a deficit is a warning sign.

"There is no real effective standard [but] you need to keep pace with inflation at a bare minimum," says Thad Calabrese, assistant professor of public and nonprofit financial management at NYU’s Robert F. Wagner Graduate School of Public Service. That is not a particularly daunting goal at the moment since the current U.S. inflation rate is about 1.5%.

"I think by and large, you should be looking for a [surplus] because that’s how you get capital," said Barr. But "being in the black is only part of the story. Is it flexible and unrestricted [money] or cash reserved for specific uses?"

Without an operating surplus, Davis added, "how does one put together a war chest for rainy days?"

Of the 71 nonprofit news outlets that provided relevant data in this survey, 11 reported operating at a deficit in 2011. Another 17 finished the year with a zero balance and more than half (43) reported a profit. Again, some of those numbers may reflect the fact that an organization must put a grant on the books in the year in which it is committed, even if plans to spend the money over a longer period of time.