Many U.S. news organizations are covering the coronavirus pandemic while themselves facing financial pressure from it. A growing number have announced layoffs, furloughs and other cost-cutting measures as the virus inflicts widespread pain on the economy, and these cuts come on top of years of earlier reductions in newsroom staffing, especially at newspapers.

Amid the financial challenges facing newsrooms, 54% of U.S. adults say the news media have done an excellent or good job responding to the coronavirus outbreak, according to a survey conducted March 19-24 as part of Pew Research Center’s Election News Pathways project. A slightly smaller share (46%) says the media’s response has been only fair or poor.

Americans rate the news media’s response to the virus more positively than that of President Donald Trump, but more negatively than the responses of other key actors, including public health officials, state and local elected officials and ordinary people in their communities.

The public’s assessment of this media response comes at a time when most Americans are paying close attention to coronavirus news. Around six-in-ten U.S. adults (57%) say they are following the news about the virus very closely, and an additional 35% are following it fairly closely, according to the survey of 11,537 adults who are members of the Center’s American Trends Panel. 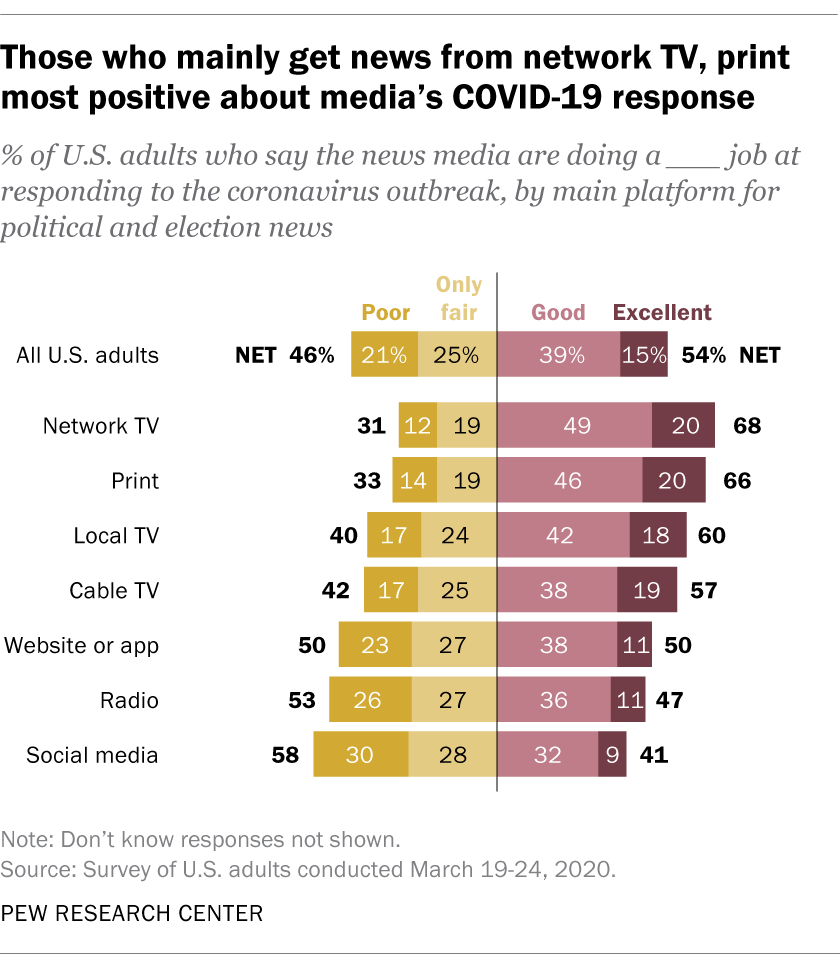 Opinions about the news media’s response to the outbreak vary considerably depending on the platform Americans use for getting news.

Americans who get political and election news from two platforms – network television and print publications – are the most likely to say the news media are doing an excellent or good job responding to the coronavirus outbreak.

Around two-thirds of those who primarily turn to network TV (68%) and print publications (66%) express this view. (It’s important to note that readers of newspaper brands often access that content online rather than through print editions. This analysis looks specifically at readers who mainly get their news through physical print editions. And this group, print media consumers, are more likely than other kinds of news users to say they pay for local news, which may relate to their more positive attitudes toward the media’s performance.)

People who turn to platforms other than network TV and print publications are generally less likely to express a positive opinion about how the media have responded to the coronavirus outbreak. Around six-in-ten of those whose main platform is local TV (60%) or cable TV (57%) express a positive view, and half or fewer say the same among those who rely mainly on news websites or apps (50%), radio (47%) or social media (41%).

Recent budget cuts in the news industry have hit newspapers especially hard. On April 1, Gannett, the publisher of USA Today and more than 260 other daily publications around the country, announced steps to reduce its expenditures by $100 million to $125 million this year, including layoffs, furloughs and salary cuts for managers. Other newspapers have suspended upcoming issues or reduced print circulation. These cuts follow a decade in which newsroom employment at U.S. newspapers fell by 47%, according to an earlier Pew Research Center analysis.

The hardships facing newsrooms during the COVID-19 pandemic have led some observers to call for a “journalism stimulus” to help the news industry shore up its finances.

Attitudinal differences about the media’s response to the coronavirus are even larger when examined through the lens of partisan identification, which remains the clearest dividing line in Americans’ attitudes about the media.

Around two-thirds of Democrats and Democratic-leaning independents (68%) – but just 37% of Republicans and GOP leaners – say the media have been doing an excellent or good job responding to the outbreak, according to the late March survey. Partisans are more divided about the media’s response than they are about the response by any other people or entities asked about in the survey, with the exception of Trump. 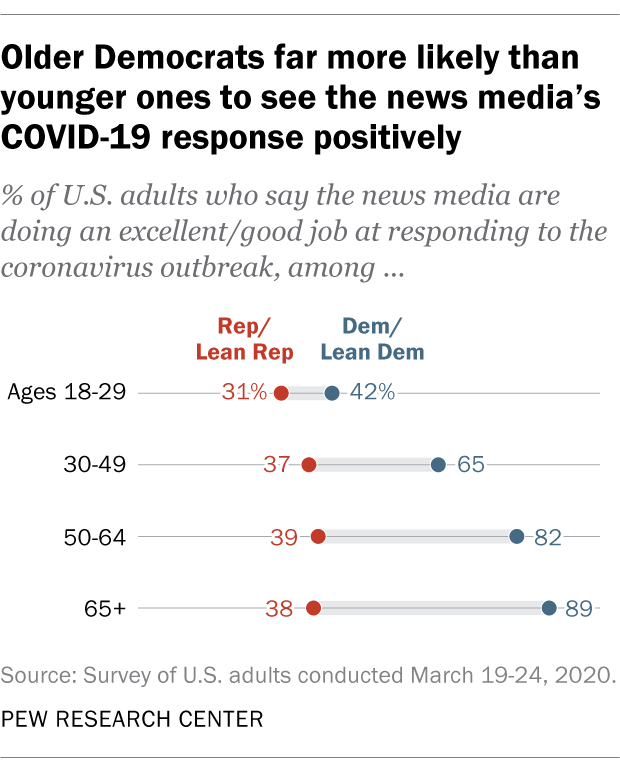 Among Democrats (including leaners), older people are much more likely than younger adults to have a positive impression of the media’s coronavirus response. Around nine-in-ten Democrats ages 65 and older (89%) rate the media’s response to the outbreak as excellent or good, compared with 82% of those ages 50 to 64, 65% of those ages 30 to 49 and only 42% of those ages 18 to 29. Among Republicans and GOP leaners, however, attitudes toward the media’s handling of the coronavirus outbreak don’t vary much by age. Across age groups, between 31% and 39% of Republicans say the media has been doing an excellent or good job responding to the outbreak.

Regardless of partisan identification, Americans generally are unaware of the financial struggles facing many local newsrooms, a late 2018 Pew Research Center survey found. In that survey, 72% of both Democrats and Republicans said their local news outlets were doing well financially. These views persisted even though only 16% of Democrats and 14% of Republicans said they personally had paid for local news within the past year, whether through a subscription, donation or membership.

Data in this analysis comes primarily from a survey conducted March 19-24, 2020. See the survey questions and methodology for this analysis, or access the dataset.