One sign of fragility in this new sector is the modest level of revenue that many work with, leaving them more vulnerable to economic shifts. Of the 77 outlets that responded to a question about revenue, 55 said they brought in no more than $500,000 in fiscal year 2011, while just 14 reported income of more than $1 million. And these modest figures may in some cases be designed to cover more than one year of operations. Accepted accounting practices for nonprofit organizations dictate that they list the full amount of a grant on the books the year it’s committed, regardless of whether they receive the entire grant at that time or whether they plan on using it all in that one year.

In addition, most of these outlets get off the ground with the help of seed money-startup grants from foundations, often coupled with donations from wealthy individuals. Sixty-one percent of the outlets that participated in the Pew Research survey reported having received startup grants that accounted for one-third or more of their original funding, and most of the grants were large. More than one-third of them (37%) were for $250,000 or more and another 18% were between $100,000 and $250,000.

But the terrain is uncertain and brings with it the near-constant need to replenish expiring grants and drum up new sources of funding. In the survey, nearly three-quarters of the outlets that received significant startup grants said those grants had expired-47% before 2012 and 25% by the end of that year. Just 28% of them (16 in all) had their grants renewed, with 12 of the 16 granting the same amount of money the second time around. That group of 12 is quite diverse. Their 2011 revenues-the last year for which figures were available-ranged from about $54,000 to $3.4 million, and their staffs varied from 10 employees to zero with an average of five. They also focused on a wide variety of topics, including international news, the environment, health, books and general interest stories. 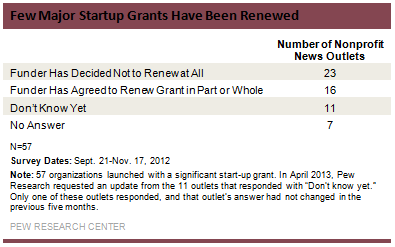 When it comes to finding replacement money, these outlets reported mixed success. Of the 26 organizations whose startup grants were renewed only partially or not at all, just 10 (38%) said they were able to make up the entire deficit from other sources.[1] An equal number made up less than a quarter of the lost money, and six fell somewhere in between.

And just because an organization receives a large seed grant does not mean it will raise a lot of additional revenue. Although most seed grants were reported to total $100,000 or more and roughly one-third were for at least $250,000, these organizations were not represented among the highest revenue earners. Indeed, revenue figures from 2011 (which may or may not include the seed grant money depending on when it was granted) show that 34 out of 57 outlets with large seed grants said they generated $500,000 or less that year, while only 11 reported revenue of $500,000 or more.

All in all, then, while seed grants may help an outlet get up and running, they don’t seem to help long-term sustainability. 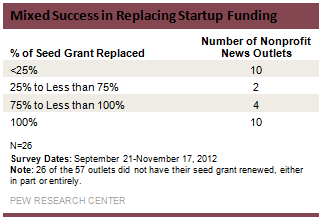 How do these organizations raise money, and from whom? There are two main sources. First and foremost are foundations, followed by individuals.

About three-quarters of the nonprofit news sites surveyed (69 of 93) said they currently received foundation funding. In most cases, those funds accounted for more than half of their total revenue.[2]

Other forms of income pale by comparison. Thirty-seven percent of the respondents said they currently raised money from advertising or sponsorship, 28% from events, 28% from payments they receive from media partners and 33% from other sources. But these income streams are relatively small, generally constituting no more than one-quarter of total revenues, according to responses based on 2011 data. 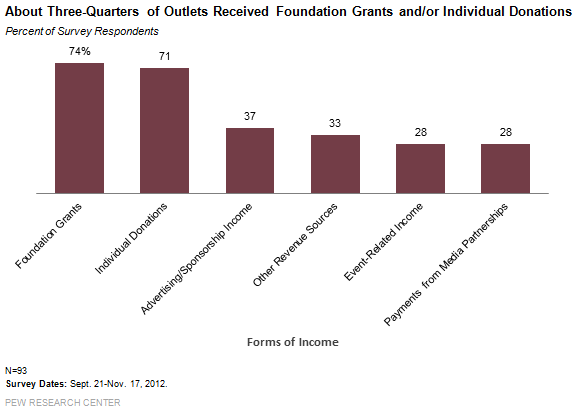 Due in part to the unpredictable nature of foundation giving, many experts say that diversifying revenue streams is the key to economic sustainability. The survey responses suggest the nonprofit organizations are taking steps to try to broaden their revenue base, but in most cases, there is still a heavy reliance on one or two streams of income.

On one level, the numbers are encouraging. Among the 88 organizations that responded, more than half (58%), reported that they had developed at least three revenue streams, while 16% said they had two revenue streams and another 16% had just one. (One additional outlet listed none at all.[3] )

Those numbers indicate that for many nonprofit news organizations, achieving revenue diversification, while a clear goal, is still a formidable task.

Within this rather unstable financial environment, the reported numbers in the survey suggest most outlets are keeping a close eye on their balance sheets. Tracking the expense and revenue flow of nonprofits can be tricky. Accepted accounting principles call for a grant to be booked the year in which is it committed, even if that grant covers multiple years-though it is unclear whether the outlets followed this practice in responding to the survey. In addition, nonprofits can show a surplus in a given time period, but then must ultimately reinvest that money back into the organization. Keeping this in mind, the reported revenues and expenses for 2011 show 43 outlets taking in more money than they spent; 17 reported that they broke even and 11 outlets ran at a deficit in 2011. Like for-profit news outlets, nonprofits spend the largest segment of their money on salaries, benefits and other compensation. Eighty-six percent of the outlets that participated in the survey said they currently spent money that way, 44% said they spent money on advertising and promotion and 41% spent money on fundraising (not including salaries). Two-thirds of the outlets also said they had other types of expenses.

The survey also asked the nonprofits about their cash reserves. Not only were there large variations, but as discussed in detail in "What Financial Health Means for Nonprofits" how much one should have on hand is far from clear. While analysts suggest a modest amount of cash on hand is sufficient, the nonprofits themselves often get mixed messages and are sometimes even penalized for having too much stored away. Among the outlets that participated in this survey, one-third  (33%) said they have enough cash on hand to stay in business for one year or more without additional money-and half of those said they could pay their bills for two years or more. Another one-third (31%) reported having enough cash on hand to stay in business for six months to one year, and 19% said they could operate on their reserves for two to six months. Just 13% said their cash reserves amounted to less than two months of expenses.

In another sign of the optimism that many of these organizations voice, more than four out of five (81%) said they were very or somewhat confident that their organization would be financially solvent five years down the road.

[1] Of the 88 outlets that answered this question, eight reported revenues, but due to the nature of the question wording, it was unclear precisely how many separate revenue streams they draw from.

[2]  Of 60 organizations that responded to a question about revenue, 24 said grants comprised more than three-quarters of their 2011 income. A dozen said foundation grants made up 51% to 75% of their revenue, 11 said they represented 26% to 50%, nine said they were 1% to 25% of the total and four said they received no foundation income.

Next: Taking Care of Business: A Catch-22
← Prev Page
Page1Page2You are reading page3Page4Page5Page6Page7Page8Page9Page10
Next Page →