While just 1% of all the election coverage studied was squarely about religion, in the 2012 campaign PEJ also analyzed the number of stories that mentioned religion, even in passing. By that measure, 6% of campaign stories in 2012 contained at least some reference to religion. (Because this was a new measure, no comparable figure is available for 2008.)

Overall, most sectors of the mainstream media – broadcast television, cable television, radio and major news websites – all mentioned religion in about the same proportion of 2012 campaign stories (5% to 8%). The one exception was newspaper front pages, where the percentage was at least twice as high: Fully 16% of front-page newspaper stories about the campaign contained at least a passing reference to religion. 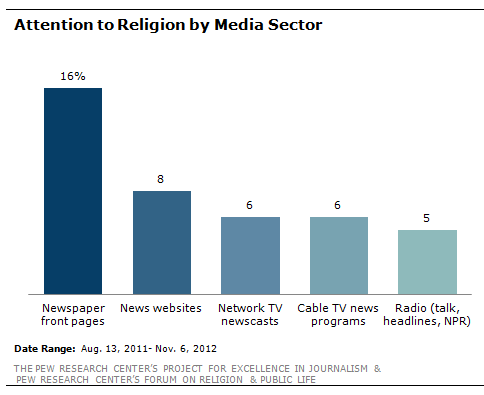 Next: The Role of the Press in shaping the Religion Narrative
← Prev Page
Page1Page2Page3You are reading page4Page5Page6Page7Page8Page9Page10Page11
Next Page →

The Media, Religion and the 2012 Campaign for President Comparing coverage in 2012 and 2008 Top-Related Campaign Stories in 2012
Differences between Newspapers and Radio, TV and Websites
The Role of the Press in shaping the Religion Narrative Major Themes in Coverage of Religion Coverage of Particular Faiths A Closer Look at Romney and Obama New Media Ecosystem - Different Conversation Methodology Topline