An examination of the main themes, or ongoing storylines, in coverage of religion during the presidential race suggests that faith was often viewed through the lens of politics. Throughout the 2012 campaign, major media routinely examined which candidate was winning or losing ground among various religious groups as well as how the candidates and their supporters were using religion as a political tool in the campaign. 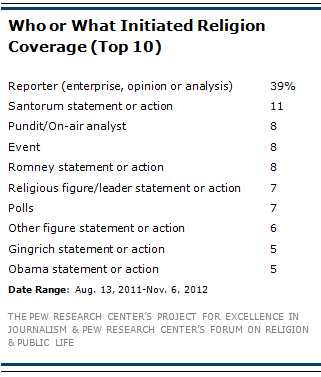 A plurality of all stories containing references to religion (45%) focused on what political commentators call "the horse race," or the tactics of the campaigns and the ups and downs of the candidates in the polls, as opposed to the substance of the candidates’ positions on key issues, their personal histories and their deeper motivations or personalities. The largest portion of horse-race stories (36%) examined how various religious groups, especially evangelicals, would vote. An additional 9% examined how the candidates were using religion as a tactical tool to position themselves or appeal to particular constituencies. 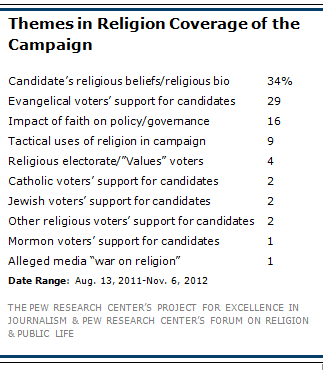 Among the 54% of stories that took a more substantive approach, the largest category (34%) dealt with the candidates’ biographies, including the place of religion in their lives. An additional 16% examined how their faith might impact policy and governance, and 4% explored the religious makeup of the electorate

Next: Coverage of Particular Faiths
← Prev Page
Page1Page2Page3Page4Page5You are reading page6Page7Page8Page9Page10Page11
Next Page →

The Media, Religion and the 2012 Campaign for President Comparing coverage in 2012 and 2008 Top-Related Campaign Stories in 2012 Differences between Newspapers and Radio, TV and Websites The Role of the Press in shaping the Religion Narrative
Major Themes in Coverage of Religion
Coverage of Particular Faiths A Closer Look at Romney and Obama New Media Ecosystem - Different Conversation Methodology Topline