Taken together, Romney and Obama were the subject of a slight majority (52%) of religion coverage over the 15-month period studied. The remainder of the coverage was spread among their running mates and the seven Republican primary candidates who ultimately withdrew.

However, Romney was the subject of twice as much religion-related coverage as Obama, with 35% of the media mentions focusing on his Mormon faith. Coverage of Obama’s religion (17% of all religion coverage) more often veered into rumor and innuendo.

The Romney campaign approached the subject of his religion with caution and, to a considerable extent, so did the mainstream media.

Though he often made generic references to God or faith on the campaign trail, Romney was more reticent about his personal religious beliefs and practices. Just 14% of the religion coverage focusing on Romney was triggered by something that he or his campaign did or said. Reporters, pundits and talk show hosts, whether through investigations or analysis, initiated 48% of religion coverage of Romney. Other candidates – including other GOP contenders in the primaries – largely stayed away from the issue, triggering just 5% of the religion coverage focused on Romney. 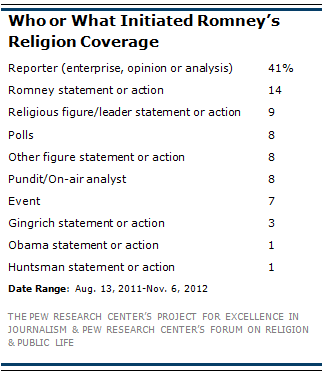 There were instances, though, when Romney opened up to the press and the public about his faith. One Sunday in August 2012, Romney’s campaign aides allowed a reporter to attend church services with him near Romney’s vacation home in New Hampshire. During the Republican National Convention later that month, several speakers took the stage to help flesh out Romney’s religious background for viewers, sharing personal stories of Romney’s acts of service in the Mormon community. And Romney himself made reference to his faith tradition, by name, in his nomination acceptance speech.

Another instance of Romney asserting himself in the public debate about religion came after the Obama administration’s Affordable Care Act was introduced. Romney drew coverage for suggesting that Obama was eroding religious liberty by requiring religious institutions to provide coverage for contraception; those remarks accounted for 4% of Romney’s religion-related coverage in the campaign.

The biggest theme, or running storyline, in the Romney-focused religion coverage was his relationship with evangelical Christian voters (33%). While the media were less inclined to question, as they did in 2007, whether the country was ready for a Mormon president, they did report and comment extensively on evangelicals’ discomfort with Romney’s religion.

This line of coverage included a live analysis on Feb. 2, 2012, by Fox News Channel’s Carl Cameron, who told viewers that "it’s worth noting that Mr. Romney’s Mormonism isn’t popular with evangelical Christians in the early voting states." Similarly, the Rev. Franklin Graham, son of evangelist Billy Graham, told CBS Early Show viewers on Feb. 17, 2012, that "it’s going to be difficult for Romney, as a Mormon, with the evangelical community."

The issue of whether conservative Christians (also referred to in media accounts by such terms as "values voters," the "Christian Right" and the GOP’s "Christian base") as well as other religious groups would support a Mormon candidate accounted for nearly half of Romney’s coverage, at 43%. 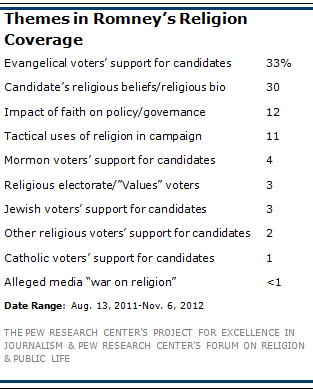 Still, fully a third of Romney’s coverage (30%) examined his religious beliefs and background. This coverage ranged from deep profile pieces – such as an October 2011 New York Times exploration of Romney’s time as a Mormon bishop in Belmont, Mass. – to merely parenthetical phrases mentioning that Romney is Mormon. Another 12% of coverage focused on how Romney’s faith could impact how he would govern.

Though no single event dominated Romney’s religion coverage, the comments about Mormonism made by Jeffress stood out, accounting for 10% of all stories focused on Romney’s faith. After Jeffress publicly called Mormonism a cult, cable and broadcast television brought significant exposure to the pastor. During a series of intense questions by CNN host Anderson Cooper, for example, Jeffress insisted that Mormons "do not embrace historical Christianity," though he also said he thought that Romney would be a better choice than Obama for Christian voters.

While there are some similarities in how Obama’s faith was covered by the media, there are two ways in which it differed from Romney’s coverage. First, the media focused less on support for Obama among particular religious groups (20% of stories), keying in more on Obama’s religious beliefs (39%) and the intersection of faith and governance (34%). Second, much of Obama’s religion coverage focused on accusations, rumors or misperceptions challenging the truthfulness of his statements about his Christian faith. 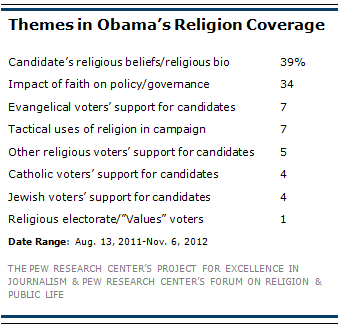 The biggest single storyline in Obama’s religion coverage focused on the negative reactions from religious groups, especially Catholic bishops, to aspects of his signature health care law (14%). This provoked claims from some Republican candidates and conservative leaders that Obama was waging a war on religious liberty.

Two instances in which conservatives questioned the sincerity of Obama’s faith made the news as well, accounting for 9% of Obama’s religion coverage. In one instance, the Rev. Franklin Graham said in a Jan. 31, 2012, interview that one would "have to ask President Obama" in response to a question of whether Graham believed the president was a Christian. And Santorum told a group in Ohio on Feb. 18, 2012, that Obama’s agenda was based on "some phony theology."

An additional 13% of Obama’s religion coverage returned to the Rev. Wright controversy of 2008, as media figures on the right felt compelled to unearth Obama’s past ties to the minister, who espoused a brand of liberation theology that conservatives found unpalatable and unpatriotic.

And another issue that arose in the 2008 campaign, rumors that Obama is a Muslim, also reappeared this time around, accounting for 7% of Obama’s religion coverage. That was in addition to another Islam-related storyline in Obama’s coverage – one that occurred late in the campaign when the attack on the U.S. diplomatic mission in Benghazi prompted Obama to address tensions between Muslims and other faiths. That accounted for 12% of Obama’s religion coverage. 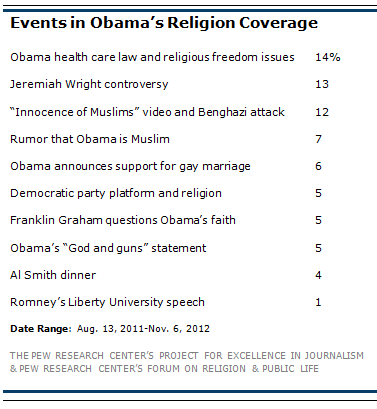 The Media, Religion and the 2012 Campaign for President Comparing coverage in 2012 and 2008 Top-Related Campaign Stories in 2012 Differences between Newspapers and Radio, TV and Websites The Role of the Press in shaping the Religion Narrative Major Themes in Coverage of Religion Coverage of Particular Faiths
A Closer Look at Romney and Obama
RomneyObama
New Media Ecosystem - Different Conversation Methodology Topline