Another way of looking at the media coverage is to assess which religious faith was featured in each story studied. The data underscore just how prominently evangelicalism featured in the media narrative about American faith and politics. Evangelical Protestants received more coverage in the campaign than did the religion of either candidate – Mormonism and mainline Protestantism (or even Christianity in general since the president has not publicly joined a congregation since leaving Trinity). 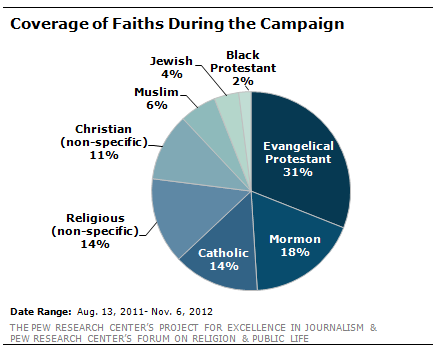 Nearly a third of all coverage (31%) focused on evangelicals. Mormonism was a distant second at 18%. Other Christian groups, including Catholics and Black Protestants, accounted for an additional 28%. Judaism (4%) and Islam (6%) were given minor supporting roles.

The heavy scrutiny by the media of white evangelical Protestants – their beliefs, values and voting behavior – can be explained in part because of the size of this group. White evangelicals made up a third (34%) of all Republican and Republican-leaning registered voters, according to Pew Research Center surveys conducted in January-July 2012. And they ended up accounting for 23% of the electorate in 2012 (and also in 2008), according to a Pew Forum analysis of exit poll data. Despite all the speculation about whether evangelicals would stay home on Election Day rather than vote for a Mormon, however, the exit polls indicate that they voted for Romney by an overwhelming margin and with no less enthusiasm than Romney’s other supporters.

Next: A Closer Look at Romney and Obama
← Prev Page
Page1Page2Page3Page4Page5Page6You are reading page7Page8Page9Page10Page11
Next Page →

The Media, Religion and the 2012 Campaign for President Comparing coverage in 2012 and 2008 Top-Related Campaign Stories in 2012 Differences between Newspapers and Radio, TV and Websites The Role of the Press in shaping the Religion Narrative Major Themes in Coverage of Religion
Coverage of Particular Faiths
A Closer Look at Romney and Obama New Media Ecosystem - Different Conversation Methodology Topline