Four years ago, in the 2008 presidential election, media coverage of religion focused on a pivotal, defining moment for each candidate. In Romney’s case, the coverage peaked in December 2007 when he delivered a major speech about faith in public life in an effort to reduce public unease with Mormonism; many media reports likened Romney’s speech to John F. Kennedy’s famous address about his Catholicism to the Greater Houston Ministerial Association in September 1960.

In Obama’s case, the peak in religion-related coverage came in early 2008 when a video surfaced of his former pastor at Chicago’s Trinity United Church of Christ, the Rev. Jeremiah Wright, making controversial statements about race in America. Obama denounced Wright’s remarks, gave a major speech on the subject of race and eventually resigned from Wright’s congregation. Many media covered the controversy as a story about race or politics rather than, or in addition to, a story about Obama’s religion. In the 2008 primary season, the Wright saga was the No. 1 campaign story overall, accounting for 6% of media coverage of the campaign in the first four months of that year.

In the 2012 presidential campaign, the overall level of religion coverage was about the same as in 2008: Religion was the central topic in about 1% of campaign stories studied. But in 2012 the media covered religion less as a defining issue about the identity of the candidates and more as a tactical matter. The tactical coverage focused on such questions as whether Romney’s Mormon faith would hurt him with the GOP’s conservative Christian base, whether Santorum’s fervent Catholicism would help him win the GOP nomination and whether Obama’s health care legislation would alienate Catholics who felt that the law infringed on their institutions’ religious freedom.

During the 15-month period studied, the volume of religion coverage formed an arc that peaked during the primary season, in the early months of 2012. Nearly half (41%) of all mentions of religion in major media outlets appeared during January and February, around the time of the Iowa caucuses and the early primaries in New Hampshire, South Carolina and elsewhere. This was also the period when Santorum, who was particularly vocal about the role of faith in his political decision-making, briefly surged in the polls.

But as the campaign became a contest between Obama and Romney, the media’s attention to religion’s role in the campaign waned, save for a brief period when Islam became part of the media narrative following an attack on the U.S. diplomatic mission in Benghazi, Libya, that killed the ambassador and three other Americans. Between June and Election Day, religion was mentioned in just 4% of campaign stories – about a third as many as in January and February, during the early primaries (13%). 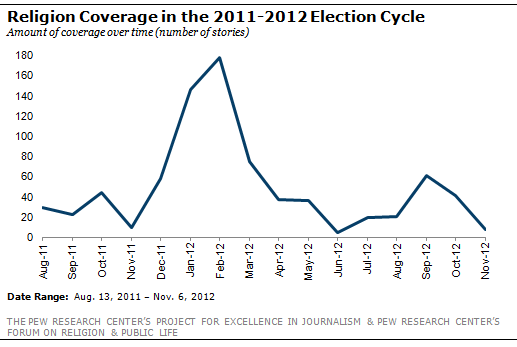 Next: Top-Related Campaign Stories in 2012
← Prev Page
Page1You are reading page2Page3Page4Page5Page6Page7Page8Page9Page10Page11
Next Page →

The Media, Religion and the 2012 Campaign for President
Comparing coverage in 2012 and 2008
Top-Related Campaign Stories in 2012 Differences between Newspapers and Radio, TV and Websites The Role of the Press in shaping the Religion Narrative Major Themes in Coverage of Religion Coverage of Particular Faiths A Closer Look at Romney and Obama New Media Ecosystem - Different Conversation Methodology Topline