At least one Arab-American news outlet chooses to publish only online. Warren David, founder and former publisher of Arab America (previously Arab Detroit) started the website five years ago.[1] David felt there "was a need for a website or digital media that would be able to communicate the Arab-American perspective," by covering events, news, and information while accurately portraying Arab Americans and uniting the Arab-American community.[2]

Arab America currently has "tens of thousands" of visitors each month, according to David. The publication also sends out a weekly e-newsletter to the 40,000 subscribers on its email listserv.[3]

The site covers national and international news as well as local news from five major U.S. cities with concentrated Arab-American populations. The publication does so by offering multiple community

sites linked to from its main webpage, arabamerica.com. The community pages are for geographic areas with large Arab-American populations-California, Illinois, Michigan, New York, and the District of Columbia. Each of the pages highlights community events in those areas, national and international news, an Arab-American business directory for the region, and a national directory of Arab-American organizations.

In addition to news of specific interest to Arab Americans, each of the regional pages and the main page include information about the history and demographics of the Arab-American population. David said that when he began the website, he also wanted to provide "a resource site for non-Arab Americans who are interested in getting information about the Arab-American community [and the] Arab world." [4] 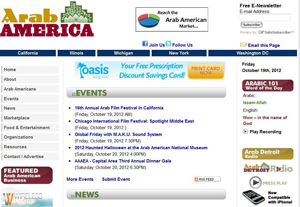 Even though readership is growing, Arab America’s advertising revenue is relatively stagnant. The site is able to keep running and cover expenses, but, according to David, profit margins are too low to significantly grow the site. His sense is that advertising alone may not be enough to support ethnic web publications. "Ethnic marketing doesn’t have the advertising base that mainstream media would have," he said. That has led him to consider partnering with a venture capital company. [5]

As with the mainstream news media, the line between traditional news sources and digital media is blurring. Manneh of New America Media attributes much of the growth in media to an increase in online content and use of social media beginning around 2009.[6] Outlets are updating readers on community events and recent reports, "whether if it’s [on] their own website, or using Tumblr, or using Blogspot, or using some… aspect of the internet, they’re able to expand their reach… and the majority of those [newspapers] are also using Facebook and Twitter ."[7] This is not to say that print newspapers are becoming obsolete within the community, but most publications have at least a small online presence.[8]

[1] David’s wife, Amal David, has since taken over as publisher of Arab America.

Next: Audio
← Prev Page
Page1Page2Page3You are reading page4Page5Page6Page7Page8Page9Page10
Next Page →