Mitt Romney needed 15 weeks once the primary contests began to gain a secure hold over his party’s nomination for president. But he emerged as the conclusive winner in the media narrative about the race six weeks earlier, following a narrow win in his native state, according to a new report by the Pew Research Center’s Project for Excellence in Journalism that examines in detail the media’s coverage of the race. 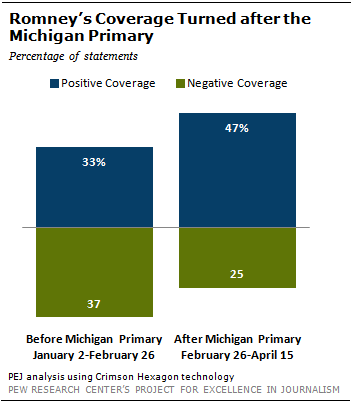 After Romney’s tight victory in the Michigan primary on Feb. 28, news coverage about his candidacy became measurably more favorable and the portrayal of his rivals—particularly Rick Santorum—began to become more negative and to shrink in volume.

One main component of that shift in the narrative is that after Michigan, the news media began to view Romney’s nomination as essentially inevitable. Indeed, a close look at the coverage finds that references to delegate math and the concept of electoral inevitability spiked in the media the week after Michigan, rising twelve fold, for instance, on television news programs. From that point on, the amount of attention in the press to Romney’s candidacy began to overwhelm that of his rivals, and the tone of coverage about him, which had been often mixed or negative before, became solidly positive.

A look inside the coverage also reveals that Romney endured more media “vetting” of his record and personal character than the other Republican contenders. Since November, just over 12% of the coverage in which Romney was a significant figure was devoted to those subjects. The press focused in particular on his wealth and his experience at the private equity investment firm Bain Capital.

A similar percentage of the coverage of Newt Gingrich also involved vetting his record and personal life (just under 12%), but he received only about half as much campaign coverage generally as Romney.

One quadrennial question about press coverage of campaigns is what subject matter will help voters decide among the candidates. Critics and journalists have long debated whether there is too much focus on strategic and tactical matters in the press. Such coverage explains what is occurring in the race but people disagree over whether it illuminates how a candidate would behave if elected.

Nonetheless, these numbers represent substantially more coverage devoted to policy, personal history and public record than was the case during the 2008 presidential primary season.

These are some of the findings of a special report by PEJ that examines how the primary season was covered and what it portends about the race ahead.

The study examines the shifts and turns in the race and tracks how much attention each candidate received, the tone of that coverage and emphasis of the coverage, or what some scholars call frame.

This analysis was produced through two forms of coding of media content. One involved computer-assisted analysis of more than 11,000 news outlets. The second involved human coding of a sample of 52 key news outlets covering print, broadcast, cable, audio and online means of distribution. The computer technology from the firm Crimson Hexagon was used to examine the tone of each candidate’s coverage, how positive or negative or neutral. The human coding was used to analyze the amount of coverage each candidate received and the framing of that coverage—whether it involved strategy, issues or personal matters. The examination of the tone and volume of coverage focused on the period from January 2-April 15. The coverage of frame reaches back further, to November, to see how the race was covered for two months before the rush of primaries began.

Among the other findings of the research:

Now the race takes a new turn. The focus will shift to the contrast between Romney and Obama, and, with Election Day seven months away, the pace of the narrative will also be altered by the calendar. This retrospective of how the primaries were covered reveals how the two presumptive nominees have been portrayed to this point and what the public has been told about them.

The public has been offered a mixed view of Romney, one that has emphasized his wealth, his record as a private equity executive and focused on the difficulties he has had as a campaigner in persuading conservative primary voters to embrace him. In the case of President Obama, the public has been exposed to a mostly negative portrayal. That, in substantial part, is a function of the fact that for many months he has been the target of multiple Republican candidates attacking his record and his competence as they sought to take his job.

Next: Frames of Campaign Coverage
← Prev Page
You are reading page1Page2Page3Page4Page5Page6Page7Page8Page9Page10
Next Page →

Gingrich Bows Out as the General Election Battle Takes Shape