Rick Santorum, who ultimately emerged as the main challenger to Romney, also had the most roller coaster like narrative of any candidate, the tone of his coverage shifting from negative to positive and back again.

The former Pennsylvania senator was never able to sustain substantially positive coverage for more than two weeks, and often not more than one. That appears to reflect the fact that although he won some important primary contests, Santorum was unable to string several wins together in a row. 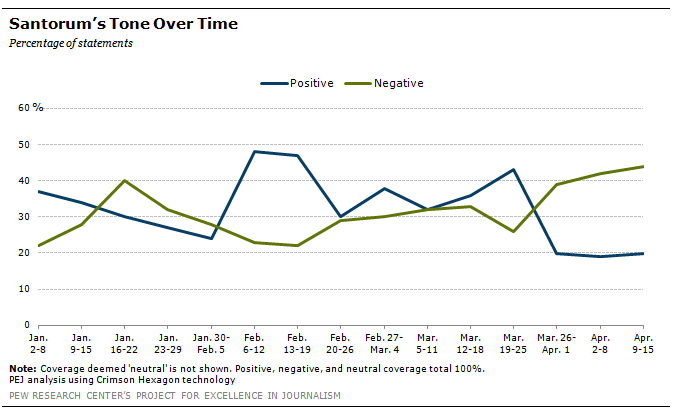 And if Romney was a frontrunner who was vetted early, the opposite was true of Santorum. He appeared to need to pass a kind of viability test with the media late last year, demonstrating enough electoral strength before the press began to examine his policy positions and his past.

Santorum, indeed, was largely ignored by the press in late 2011. The last two months of the year, he generated even less attention than Ron Paul. That began to change in early January in the week of the Iowa caucus.

Santorum’s Iowa victory on Jan. 3 also produced a burst of positive coverage for him. The tone of that coverage flattened out the following week, although it stayed more positive than negative, when he finished fifth in the New Hampshire primary. But during the week of his third-place finish in South Carolina on Jan. 21, the tone of Santorum’s coverage dropped markedly; negative assertions outstripped positive ones by 10 points. And Santorum’s narrative remained more negative than positive for the next two weeks until his victories on Feb. 7 in Minnesota, Missouri and Colorado.

Those victories marked the apex of Santorum’s primary campaign narrative. The week of Feb. 6-12, positive coverage spiked to 48% and negative dropped to 23%—a 25-point positive differential. The numbers stayed in that range the following week.

A week later, on the eve of the Arizona and Michigan primaries, the narrative became more mixed again as polls showed Santorum losing momentum in Michigan and trailing heavily in Arizona.

He would enjoy only one more substantially positive week of coverage, when he won his last contest, the March 24 Louisiana primary—43% of the assertions about his campaign were positive with 26% negative.

One week later, with Romney racking up some important endorsements and the delegate math growing more daunting, Santorum’s negative coverage outstripped positive by 19 points. Within two weeks, he had suspended his campaign. 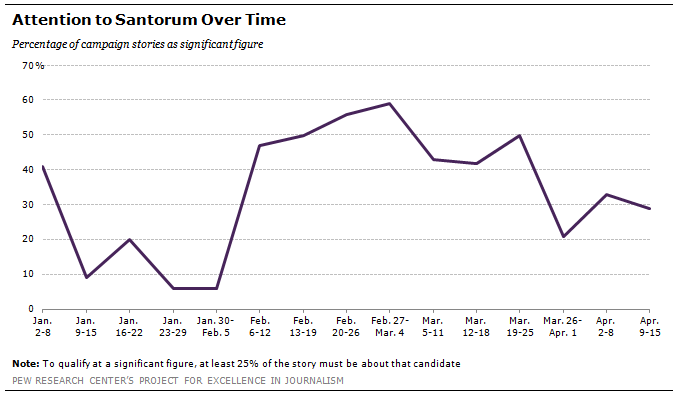 If the tone of Santorum’s coverage yo-yoed, so did the amount of coverage he received. In three of the first five weeks of the year, he was a significant figure in less than 10% of the campaign stories studied. He did not consistently become a major newsmaker until the week of his Feb. 7 primary trifecta. In each of the seven weeks from early February to late March, he was a significant presence in between 42% and 60% of the campaign stories, although he still trailed Romney all but one week.

By the final weeks of his campaign, however, as delegate math became a theme of the coverage, Santorum began to shrink as a focus in the media. The last week of March, he was a significant presence in 21% of the stories, down from 50% the week before. A week later, his coverage grew to 33%, but that included considerable speculation that he would soon exit the race.

The focus of the coverage of Santorum is also a study in how a candidate may not actually receive much vetting for his or her ideas or record until the press decides that person could possibly win.

In November and December 2011, 92% of Santorum’s coverage was framed around tactics, strategy and horse race—even if there weren’t many stories about his campaign at that point.  What little coverage Santorum received, in other words, focused largely on his status in the polls.

During these first two months, just 2% focused on Santorum’s policy positions and effectively no coverage in which he was a significant presence was primarily framed around his record and background.

That changed only after he won something, the Iowa caucuses.

In January and February, 11% of Santorum’s coverage focused on his record and background and 7% on his positions. In March, as his candidacy appeared less viable, the examination of his positions and record shrank again. 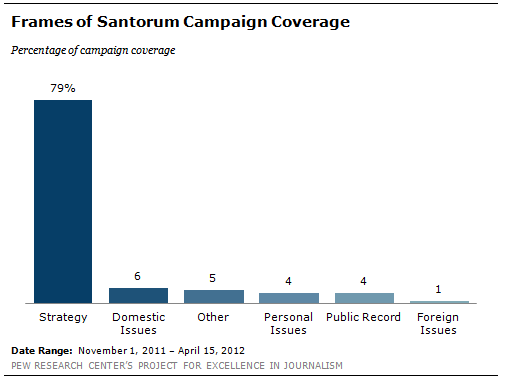 Overall, from November through April 15, Santorum’s personal and public life accounted for 8% of his coverage—divided evenly between attention to the personal and public. That coverage included, on the personal side, significant attention to Santorum’s deeply held religious beliefs as a devout Catholic. When it came to his record in office, the earmarks he secured as a Pennsylvania senator were among the most frequent topics.

Another 7% of Santorum’s coverage was related to policy issues, primarily domestic ones. For all the Republican candidates, the economy and healthcare were the two main policy issues. But Santorum also generated significant attention for his views on education, abortion and topics such as pornography and contraception—positions that were in many cases closely intertwined with his religious beliefs.

And 79% of the coverage about the former Pennsylvania senator from November to April 15 focused on strategy, momentum, advertising and fundraising—numbers very much in keeping with those of the other candidates.