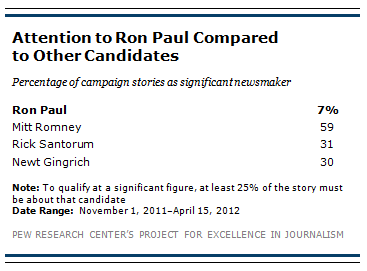 For much of 2012, the tone of Paul’s coverage was more positive than negative. But the glaring lack of attention in the news coverage reflected a media consensus that despite a loyal following and some respectable primary showings, the libertarian-leaning candidate could not capture the Republican nomination.

From Jan. 2-April 15, Paul was a significant figure in only 7% of the campaign stories. That represented about one-eighth of Romney’s coverage and roughly one-quarter of the amount devoted to Santorum and Gingrich.

In only two weeks in 2012 did Paul register in more than 10% of the campaign stories. They were the first two weeks of the year—at 20% and 15%—when he had a solid third-place showing in Iowa (only 3 points  behind Santorum) and a second-place finish behind Romney in New Hampshire. 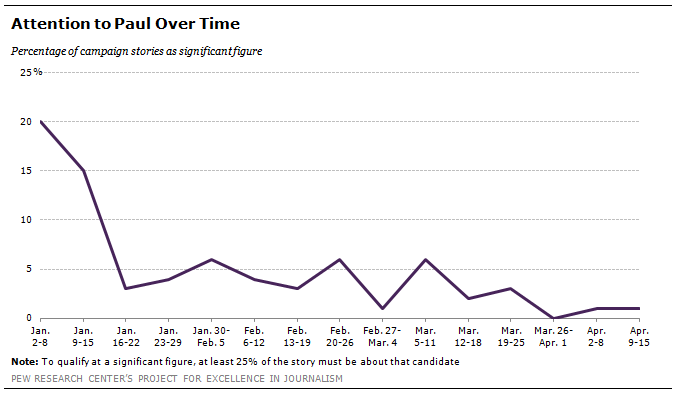 From that point on, Paul was a significant newsmaker in no more than 6% of the stories in any given week. For much of this year, whatever media attention Paul did muster was positive and largely stable, with fewer fluctuations than any of his foes. In the first 11 weeks, positive coverage exceeded negative coverage by anywhere from 6 to 20 points.  The best week (42% positive and 22% negative) came when he captured 23% of the vote in New Hampshire. 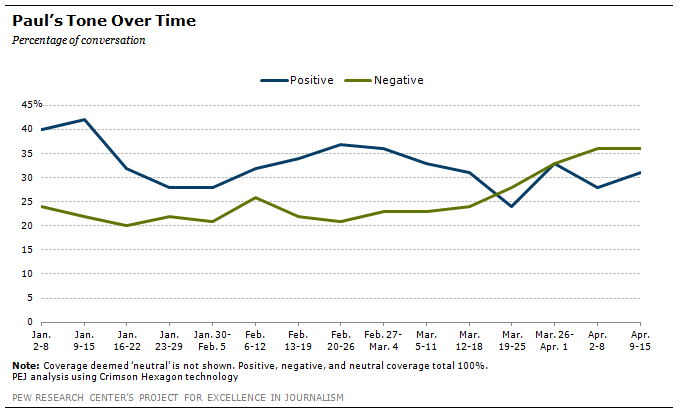 But by late March, Paul’s narrative turned negative for the first time—24% positive and 28% negative the week of March 19-25. And it never returned to positive territory as the coverage began focusing on his increasingly quixotic effort.

Paul, whose isolationist views distinguished him from his GOP rivals, generated a higher percentage of attention on foreign policy issues (4%) than the other candidates. That peaked, at 8%, back in November and December 2011 when foreign policy in general got the most attention in the campaign.

Due in part to coverage of his foreign policy stances, the percentage of combined coverage devoted to his overseas and domestic policies (9%) was also the highest in the Republican field.

Conversely, the vetting of Paul’s personal and public life was minimal. Only 3% of the coverage about him focused on those subjects—far less than Romney (12%), Gingrich (12%) and Santorum (8%). To some degree, that reflected the media consensus that Paul could not win and thus, no extensive look at his history and biography was warranted. 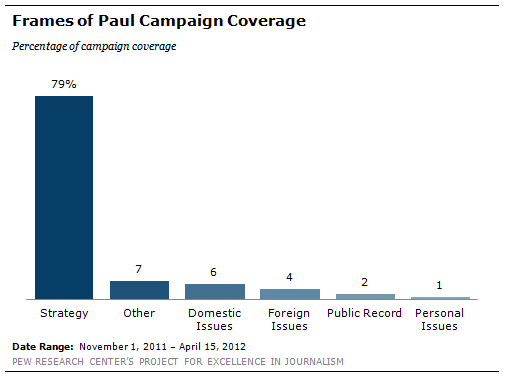 One area in which Paul was similar to his rivals was in the percentage of coverage devoted to the strategic aspects of his campaign. From November to April 15, that accounted for 79% of the coverage about him, reaching its highest level (91%) in March and April.