Of all the presidential candidates studied in this report, only one figure did not have a single week in 2012 when positive coverage exceeded negative coverage—the incumbent, Democrat Barack Obama.

While a sitting president may have access to the “bully pulpit,” that does not mean he has control of the media narrative, particularly during the other party’s primary season.

In Obama’s case, his negative coverage was driven by several factors. One was the consistent criticism leveled at him by each of the Republican contenders during primary season. The other involved news coverage of issues—ranging from the tenuous economic recovery to the continuing challenges to his health care legislation—with which he was inextricably linked. An examination of the themes in Obama’s coverage also reveals that the coverage placed him firmly in campaign mode. His coverage that focused on the strategic frame exceeded that relating to policy issues by 3:1.

Although Obama’s coverage in 2012 was consistently on the negative side, there were marked variations in the past few months.

In January, the differential between the president’s positive and negative coverage was dramatic. In the four weeks, the percentage of negative assertions outnumbered positive ones by between 28 and 37 points.

That tone, however, began to moderate in the first three weeks of February, when negative coverage exceeded positive by between 11 and 15 points. 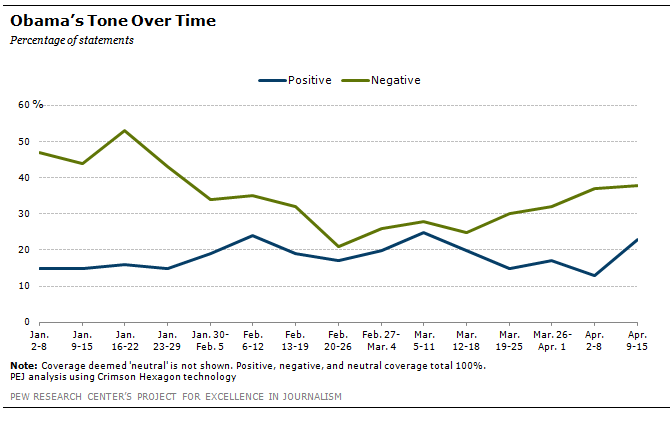 Then, starting the week of Feb. 20, Obama saw a month in which the differential dropped even further—down to mid and low single digits—essentially giving him a mixed narrative.  One thing that helped Obama’s narrative in that period was the media’s increasing focus on an eventual Romney-Obama matchup, and some polling data  that seemed favorable to the incumbent.

But there was one more change in the tone of coverage. Beginning in late March, the gap between negative and positive coverage jumped back to 15 percentage points, culminating in the week of April 2-8, when positive assertions fell to 13% and negative rose to 37%—marking his worst week since January. The tone of his narrative rebounded somewhat the following week, narrowing the gap between his negative and positive coverage back to 15 points.

Several factors drove Obama’s negative coverage in recent weeks. One of them was the continued rise in gas prices, which triggered criticism of the administration’s energy policy. Another was the uncertainty surrounding the health care legislation as the Supreme Court held hearings on the law in late March.

Still another element was the accidental open mic comment when Obama was overheard telling Russian President Dmitry Medvedev that he would have “more flexibility” in dealing with the Russian-U.S. relations “after my election.” That comment quickly became part of the campaign narrative with Romney characterizing it as “alarming” and “troubling.”

Other than tone, what distinguished Obama’s coverage most from his rivals’ was considerably more focus on the issues—not surprising given that he is the sitting president. Domestic and foreign policy matters accounted for 21% of his coverage compared with 8% for Romney, 7% for Santorum, 6% for Gingrich and 9% for Paul.

A large majority of the president’s issues coverage (18%) focused on domestic policy, with that coverage spiking in recent months. In January and February, 18% of Obama’s coverage was about domestic issues—most notably rising gas prices and unemployment. 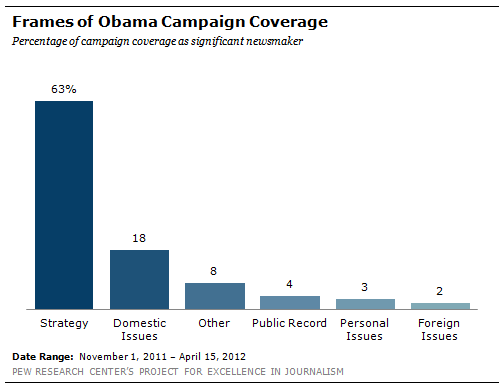 From March 1-April 15, that number rose to 22% with the focus on subjects such as the Keystone oil pipeline, the contraception issue and Obama’s year-old health care bill—his biggest domestic policy initiative—which is being challenged at the Supreme Court.

Next: Methodology
← Prev Page
Page1Page2Page3Page4Page5Page6Page7You are reading page8Page9Page10Page11
Next Page →