Once the presidential primaries begin—and there is a new electoral contest nearly every week—the media often focus heavily on tactics, strategy and the numbers of the horse race. On top of that, during the primaries the policy differences between candidates are sometimes fairly minimal as rivals contend for the favor of party primary voters. In 2012, horse race and strategy dominated, but not to the degree they had in 2008.

From November 2011 to April 15, 2012, the coverage devoted to the strategic elements of the GOP primary fight (horse race, tactics, strategy, money and advertising) outnumbered the combined attention to all foreign and domestic policy issues by about 6:1. 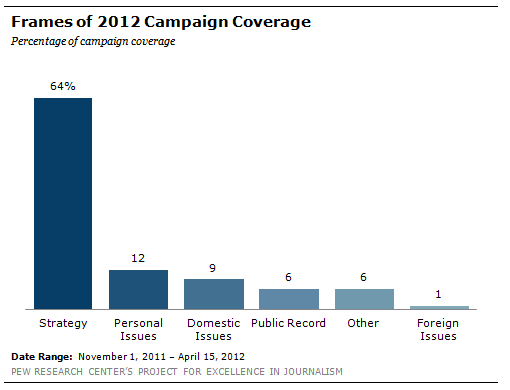 Overall, 64% of campaign coverage examined was framed around polls, advertising, fundraising, strategy and the constant question of who is winning and who is losing. There was only one month studied, November 2011, when strategy, tactics and money made up less than 60% of the coverage studied. That month they accounted for 41% and the examination of the candidates’ personal histories accounted for another 39%. Of particular focus that month was Romney’s Mormon faith, Gingrich’s marital history and Santorum’s religious beliefs. By contrast, the focus on strategy, tactics and money reached its peak in March, when about three-quarters (74%) of the coverage was devoted to those subjects.

The next biggest focus of coverage was the candidates’ personal backgrounds, such as their families, religion, marriages and finances. In all, personal topics accounted for 12% of the campaign coverage from November through mid-April. That kind of candidate vetting often takes place in the earlier stages of a primary campaign when the contenders are not as well known to the public. After accounting for 39% last November, coverage of the personal history of the candidates fell off markedly in the next four months.

Another way for the media to scrutinize candidates, particularly those who are lesser known, is to examine their public record and performance in office. These topics formed only a small portion of the coverage of the primaries in 2012.

From November through mid-April, the candidates’ public records accounted for 6% of the overall campaign coverage studied. 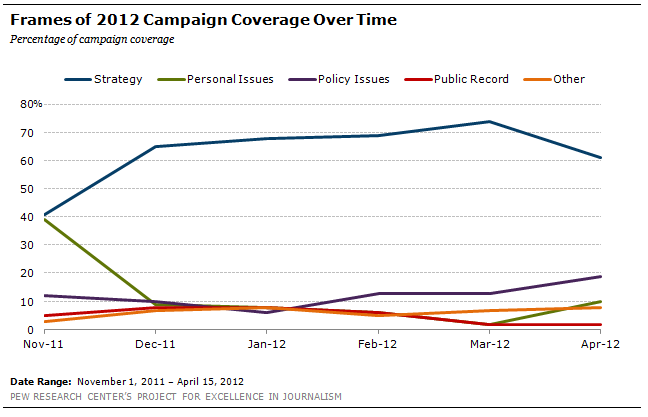 What about what some call "the issues," the policy positions offered by the candidates as a way to project who they are and why voters should support them? Over the last five and a half months, the candidates’ policy proposals and stands on the issues accounted for 11% of the campaign coverage. The vast majority of these focused on domestic issues, in particular health care, unemployment and the overall economy. These domestic subjects accounted for 9% of the coverage from November through March, and coverage remained relatively steady. That number rose some, to 12%, in February and March—with some of that coverage attributable to a growing discussion of rising gas prices and the health care debate.

There was far less attention paid to foreign policy issues such as Iran’s nuclear program, negotiations with Russia, and relations with Israel, all of which accounted for just 1% of the campaign coverage. The most attention to that topic occurred back in November 2011 (4%) when the debate centered on whether President Obama’s policy was tough enough toward Iran and not friendly enough toward Israel.

One other subject area generated significant coverage during the primary season. In all, 6% of the campaign coverage was focused on the actions of voters and the identification and analysis of voting blocs, ranging from young voters to Catholic voters.

Compared with 2008, when there were open primaries in both parties, the focus on politics over policy and history is smaller. In 2008, in the Republican fight ultimately won by John McCain, 80% of the coverage in the main primary season was framed around strategy, tactics, advertising, fundraising and momentum; 4% focused on domestic issues; 5% focused on scrutiny of the candidates’ public records and personal lives.

The numbers were similar in the Democratic battle won by Obama. Fully 78% of the coverage during the key primary battles highlighted the strategy and tactics frame, 4% was about domestic policy and 10% focused on the candidate’s record and personal life.

Thus, from November 2011 through mid-April 2012, there has been considerably less strategic focus (64% vs. 80% in the 2008 GOP race), more than twice as much emphasis on domestic policy (9% vs. 4%) and considerably more vetting of the candidates’ career and personal issues (17% vs. 5% in the 2008 GOP race). While some critics who are skeptical of horse race coverage may consider the numbers higher than they might like, in 2012 more emphasis has been placed on who the candidates are and what they stand for than was the case four years earlier.

Due in large part to the fact that there were two open primary battles in 2008, the amount of overall campaign coverage from Jan. 2-April 15, 2012 is about 30% less than what it was in the same period four years earlier.

Next: The Story by Candidate
← Prev Page
Page1You are reading page2Page3Page4Page5Page6Page7Page8Page9Page10Page11
Next Page →