The Project released its initial study of how the media have covered the campaign on October 17. That broad sample offers a remarkably deep and robust look at what the news media provide the American public. With roughly 11,500 outlets included, it is effectively a census of all the news media provided to Americans via RSS feeds. Only a handful of outlets are not included, notably those that have a strict paywall, such as the Wall Street Journal, but those with more porous paywalls, such as the New York Times, are included.

Some have wondered how that broad spectrum might compare to the smaller sample of outlets typical of more traditional media research that does not involve algorithmic coding. Because of the time involved in human coding, traditional research has used samples of media as a proxy for the media overall, a limitation that computers are able to avoid. PEJ, for instance, examines the output from 52 different outlets for its weekly News Coverage Index to assess media agenda-which topics the media are covering and which they are not. That sample (which includes print, cable, radio or audio, online and broadcast) is selected to provide a cross section of national media based in large part on audience numbers.

For this report, PEJ took the same outlets and coded the content for tone using the same mix of human and algorithmic coding that it used for the broader sample. (Three of the radio talk shows did not have RSS feeds, one newspaper had a paywall and one website does not produce original reporting).

The results show little variation between the two samples over the six month period from May 2-November 6. 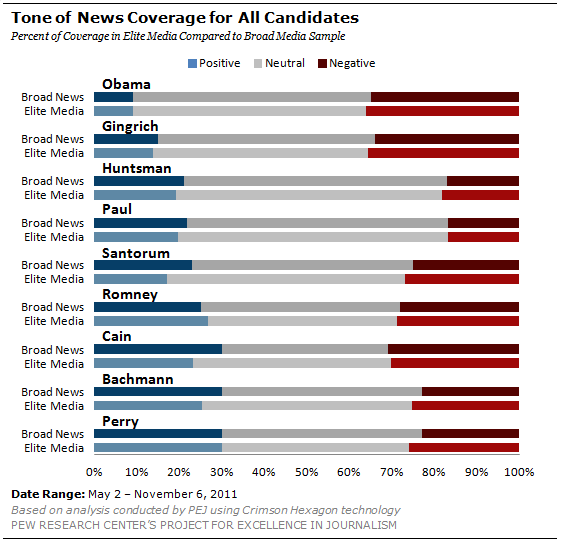 There are various possible explanations for why the widest spectrum of news outlets and a smaller sample of popular national outlets are so similar in tone. One is that the media conversation moves so quickly today, and is so easily consumed, that the assessments of candidates by elite national media outlets are mirrored by smaller ones relatively quickly. Another explanation is that the media ecosystem has become highly distributive, meaning that the content many local outlets are presenting is actually material that was produced by national outlets-and this distribution system is made even more efficient by digital technology.  A local television or radio website that wants to post and distribute a national political story can easily use wires, or rewrite them, without any of the limitations of space and time those media faced in their legacy platforms. An analysis of the content in the broader sample finds, indeed, that the elite media that cover the campaign regularly provided the highest percentage of the content that was coded in the broad spectrum of media.  Some of these outlets include Yahoo.com, Reuters.com, Washingtonpost.com and NYTimes.com.

Another feature of the comparison between the broad media spectrum and the smaller elite sample is how similar they are in coverage of President Obama. Even the differences by week over the course of 27 weeks are negligible. When it came to the percentage of positive statements about him, the two samples were within two percentage points in all the weeks studied.

Why would the two samples of media be so similar about Obama? There are some possible structural reasons that may help explain this. One is that, as president, Obama is simply attached to problems in the country that he cannot escape-an economy that has been weakening, falling poll numbers, the fight over the debt crisis that critics felt was a sign of an increasingly dysfunctional Washington. In addition, Obama as a candidate has a host of Republican candidates making news every day while attacking him. House and Senate Republicans are doing the same. And as the president struggled, and his numbers slipped, members of his own party were critical as well. All of that is reflected in the news coverage.

There were some differences between the two samples, however. First, when the media narrative about a candidate shifts, the elite media tend to reflect the change more quickly. The broad spectrum of news outlets, in turn, tend to follow by about two weeks. And when the tone in the broader spectrum of news outlets shifts, the difference between positive and negative assertions about a candidate becomes even more pronounced there, a kind of amplifying echo effect across the media spectrum, in which matters become less nuanced.

In August, for instance, the tone in elite media became mixed and less positive about Michelle Bachmann two weeks before the tone in the broad media universe took a similar turn. The elite media, it seems, began to discount how much gain Bachmann would enjoy from winning the Iowa straw poll in mid August, as Perry entered the race. In the broad media sample, she enjoyed her two best weeks of coverage in late August, but saw the tone turn negative in September.

Similarly, the tone of coverage in elite media shifted to more negative than positive about Rick Perry the week of September 12-18, after some controversial debate performances. The tone turned in the broad media sample two weeks later, the week of October 3-9, following a particularly difficult debate performance in Florida and as he began to slip behind Romney and Cain in polls.

When the broad media turn, the tone also can become even more pronounced in one direction or the other than in the smaller elite media sample. Once the media overall became more negative about Perry, the differential between negative and positive assertions about his candidacy were at least five percentage points more than in the elite media every week thereafter, except for one. The same was true of Bachmann once negative assertions about her began to significantly outnumber positive ones in early October.

The pattern had already begun to emerge with Cain, even before the allegations of sexual harassment. Coverage of Cain in the broad sample became more positive in mid-August and continued that way through the week of October 17-23. Yet in elite media, the coverage became more mixed the first week of October.

If the pattern seen before between elite and broad media recurs now, the tone of coverage about Cain would become even more negative in the broader spectrum of media.

Next: Methodology
← Prev Page
Page1Page2Page3Page4You are reading page5Page6Page7
Next Page →