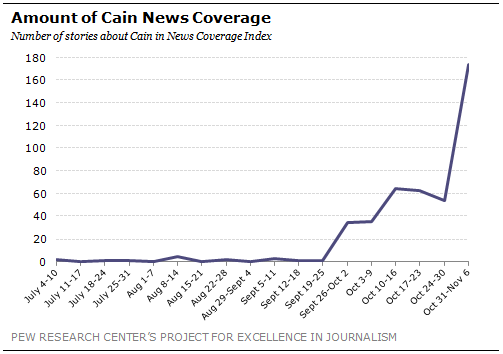 Cain’s difficulties in the press had been building for nearly a month, but last week was different for two reasons. The percentage of positive assertions about his candidacy fell. Perhaps just as important, the volume of coverage about him was enormous.

Last week (October 31 through November 6) represented by a substantial margin the high water mark of 2012 presidential coverage thus far. The campaign filled 29% of the newshole studied, according to PEJ’s News Coverage Index which monitors the news agenda in the U.S. press each week by examining in real time what topics get what level of coverage.[1] That was roughly a third more attention than the previous high point in coverage, which was 19%, from October 10-16.

That represents the single biggest week of coverage for any candidate in the Republican field so far in the 2012 race. Put another way, the media’s gaze was focused more intently on Cain last week than it had been so far in any week on any candidate. (By comparison Romney, the second-most covered GOP candidate last week, was a significant newsmaker in 15% of the campaign stories and a dominant newsmaker in 9%.)

As one measure of how widespread news of Cain’s troubles became, a new poll by the Pew Research Center for the People & the Press taken late last week found that 75% of Americans said they had heard a lot or a little about the sexual harassment allegations. 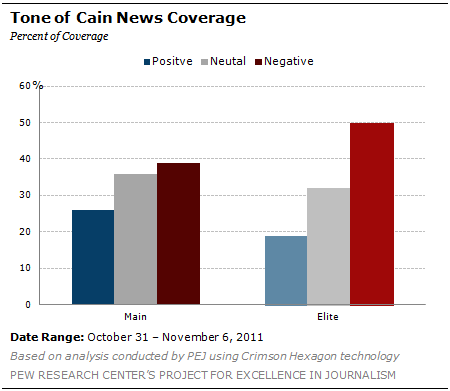 The story, initially broken by the political site Politico on October 30, expanded as Cain’s campaign had difficulty responding, at one point accusing the campaign of Texas Governor Rick Perry of leaking the news. The story also grew with reports about compensation paid to one of the accusers and then with the number of women allegedly involved growing. (This week, on November 7, another woman, Sharon Bialek, came forward to publicly detail what she said were inappropriate attempts by Cain to secure sexual favors in exchange for his help in finding her a job.)

As the scandal grew, much of the negative coverage of Cain involved speculation about its potential to seriously damage, if not end, what had been a surprisingly successful campaign. Many political analysts and pundits were looking past the rush of developments to handicap the unlikely frontrunner’s chances of survival.

By week’s end, the result was not so much a jump in negative coverage for Cain across the broad spectrum of media outlets as it was a drop in his positive coverage. For the week, 26% of statements about Cain were positive (down from 32% the week before) and 39% were negative (similar to 41% the week before, which had been his most negative week to date).

The assessment was even more negative in the smaller sample of elite media, where the tone of Cain’s coverage last week was 19% positive, 50% negative and 32% neutral.

In these elite outlets, the political calculus of the potential fallout of the accusations-and the competency of Cain in addressing them-were particularly evident in the coverage.

An October 31 story on the CBS News site was headlined, "Can Herman Cain’s campaign survive?" warning that "further developments in this story could potentially sink his campaign."

On Nov. 2, the New York Times’ Nate Silver blogged that, "I’ve become convinced that the sexual harassment allegations against Mr. Cain are a real problem" in regard to the viability of his campaign.

A day later, writing in the Washington Post, conservative commentator Jennifer Rubin went further, asserting that "Republican operatives, pollsters and consultants seem in agreement that Herman Cain is, as a prominent communications guru put it, ‘toast.’"

Yet throughout the week there was also was a counter narrative that led to some positive coverage for Cain. Despite the brewing scandal, he was holding firm at the top of GOP presidential polls. 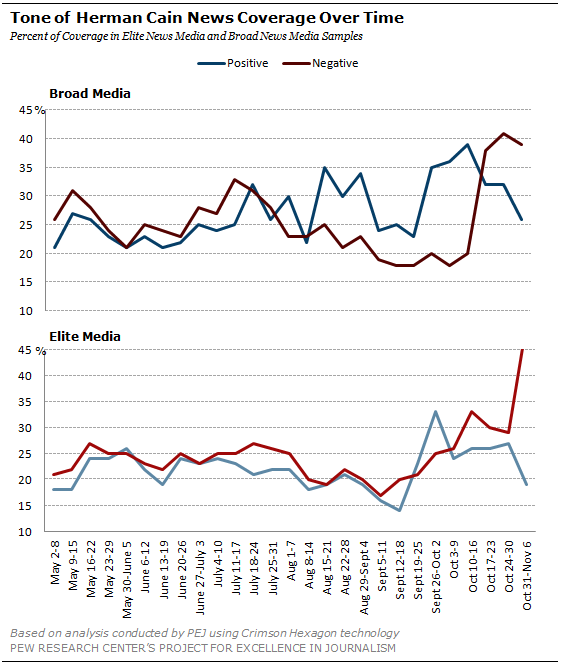 On November 2, the Wall Street Journal reported that "after two days of fending off allegations of sexual harassment dating back a dozen years, GOP presidential hopeful Herman Cain remains popular in the early primary state of South Carolina, a new poll finds. A Rasmussen survey conducted Tuesday found Mr. Cain in the lead with 33% support from likely Republican primary voters."

A November 4 piece in Commentary magazine noted that Cain’s apparent staying power in the polls "has led many observers to conclude that Cain is not merely a strong candidate but is actually bulletproof to charges that would destroy other men’s hopes."

Whether those poll numbers begin to drop with time remains to be seen. But the rapid downward trajectory in the tone of Cain’s news coverage is already apparent. As recently as October 10-16, his positive coverage exceeded negative by 19 percentage points in the broad spectrum of media outlets. Last week across that broad swath of outlets, the negative dominated by 13 percentage points-a dramatic 32-point swing in only three weeks.

[1] The list of media outlets included in PEJ’s News Coverage Index closely resembles the list of outlets represented in the "elite" media sample.