If it weren’t for the fact that he got significantly less coverage, Rick Perry would have had an even worse week in the broad cross section of news coverage than Cain. From October 31-November 6, only 20% of the assertions about Perry were positive compared with 41% negative and 39% neutral.

Perry however, was far less visible. He was present in a fraction of the coverage that Cain was. Perry for the week was a significant newsmaker in 11% of the campaign stories and a dominant newsmaker in 4%. His problems-including a circulating video of an unusually animated and unbound Perry speaking in New Hampshire-were obscured by the volume of tough Cain coverage.

Perry has also seen a recent and dramatic turnaround in the tone of his media narrative. For 22 consecutive weeks, from May 2-October 2, Perry’s positive news coverage exceeded negative coverage, based largely on his perceived strengths as a candidate and his instant rocketing to the top of the polls after his August 13 entry into the race.

But for the last five consecutive weeks starting in early October, the percentage of negative statements in the press have outnumbered positive ones about Perry, and the differential between negative and positive assertions has grown each week. Last week, it reached a new high with negative outstripping positive ones by 21 percentage points. 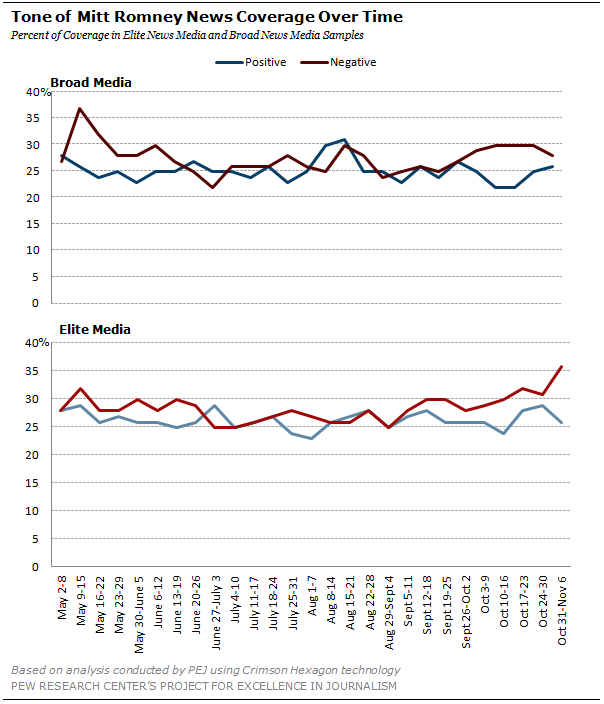 Last week, 26% of the assertions about Romney were positive compared with 28% negative and 46% neutral. That actually marked a slight improvement over the previous four weeks when his negative assertions exceeded his positive ones by between four and eight percentage points.

As was the case with Cain, the tone of Perry’s and Romney’s coverage was also more negative in the subsample of "elite" media outlets last week. There, 19% of the assertions about the Perry were positive compared with 49% negative and 32% neutral-a 30 point negative to positive difference. For Romney, 26% of the assertions were positive, 36% negative and 38% neutral-a 10 point negative differential.

No other GOP candidates generated significant media coverage last week. Only three of them enjoyed more positive than negative coverage in the broader news sample. Whether coincidentally or not, they are the candidates lagging in the presidential preference polls-Jon Huntsman (25% positive, 17% negative, 57% neutral), Rick Santorum (24% positive, 19% negative, 56% neutral) and Ron Paul, who had the best week at 32% positive, 14% negative and 55% neutral.

Yet, when the sample is narrowed to elite media, only Paul emerged with coverage that was more positive (17%) than negative (13%) last week.

Next: The Mainstream Media, Elite vs. Broad Sample
← Prev Page
Page1Page2Page3You are reading page4Page5Page6Page7
Next Page →