While his support continued to hold in the polls, businessman and GOP presidential candidate Herman Cain was the focus of a much tougher narrative in the news media last week, according to an analysis by the Pew Research Center’s Project for Excellence in Journalism. The week, October 31 through November 6, was also the third consecutive one in which negative assertions of Cain in the press outnumbered positive, a turn in his narrative that predated allegations of sexual harassment. 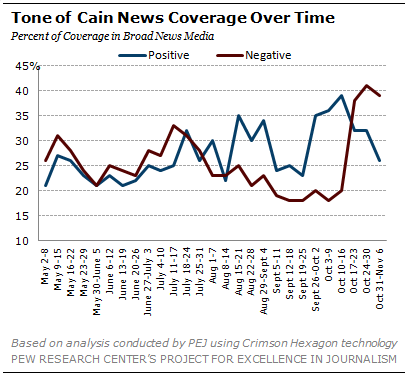 Last week, with the news media focused on reports that the trade association Cain once ran compensated women who had alleged he had sexually harassed them, 39% percent of the statements about Cain across a broad spectrum of news media were negative, while 26% were positive (and 36% were neutral).

That 13 point differential between negative and positive coverage is the worst week Cain has undergone in press coverage so far, looking across six months of coverage in some 11,500 news outlets, a sample that represents the bulk of what Americans see in the media.

But the tone of the narrative had already begun to turn negative for Cain the week of October 17-23, as he began to see more media scrutiny of his 9-9-9 tax plan and other aspects of his positions while he gained in the polls.

The new PEJ study, which updates an earlier October 17 report on the tone of campaign news coverage, also compares two samples of news media with each other-that broad spectrum of news media and an “elite” media sample of 47 outlets that are among the largest and most popular.

That comparison shows the subsample of “elite” media news outlets were even tougher on Cain last week. In that smaller group of outlets, negative statements outnumbered positive toward Cain by 31 points (19% positive, 50% negative and 32% neutral).

The comparison between the broad spectrum of news outlets and the smaller group of elite outlets also reveals some interesting distinctions between the samples more generally. The elite media tend to move faster when there is a shift in the media narrative. The broader spectrum of media sometimes shifts a week or two later, and when it does so the differentials can be even more pronounced than in the elite media.

Over time, however, the tone of coverage in the broad spectrum of news outlets and the tone in the elite subsample tend to merge and look very similar.

For instance, overall across the broad range of news outlets, 25% of the statements about Mitt Romney were positive, while 28% were negative and 47% neutral from May 2 to November 6. In the smaller media sample, the numbers were 27%, 29% and 45%.

These are some of the findings of a new report that combines traditional content analysis methods with computer algorithmic coding using software developed by the company Crimson Hexagon.

This research on the tone in news coverage is not a study of media fairness or bias. Rather, it offers a comprehensive, quantitative analysis of whether the messages Americans receive about a candidate in the news media are positive, negative or neutral. The work examines and quantifies all the assertions about a candidate in news coverage, whether they come from journalists, supporters, opponents, citizens, newsmakers, pundits, polling data and other sources, to understand the overall narrative about that candidate. When a candidate is widely criticized by rivals, for instance, Americans are hearing negative statements about that candidate. When a candidate begins to surge in the polls, and his or her candidacy begins to look more viable, Americans are receiving positive statements about that candidate.

Next: About the Study
← Prev Page
You are reading page1Page2Page3Page4Page5Page6Page7
Next Page →