Are some media more likely to focus on Hispanics than others?

Newspapers had the greatest proportion of Hispanic related coverage of any sector. Overall, 4.3% of its coverage that began on the front pages of the 13 papers studied contained substantial references to Hispanics. Cable television had the lowest proportion, (1.9%).  Online, radio news and network TV fell in between.

And not surprisingly, regional differences were substantial. Among newspapers studied, for instance, the San Antonio Express News, situated near the Mexican border, stood out for its attention to Hispanics. Fully 9.8% of the coverage on its front page contained significant Hispanic references. Topics like the Mexican drug war and H1N1 were prominent

On April 30, for instance, the Express News featured a story about a man sentenced to 51 years in a local court for smuggling ammunition to Mexican cartels.  The Express News also ran a Houston Chronicle story on May 12 about the toll of drug-related kidnappings, particularly on U.S. families with relatives living in Mexico: “Some 8,000 abductions have been reported in Mexico since the mid-1990s. Scores of Americans have been kidnapped along the border, many of them still missing years later.” 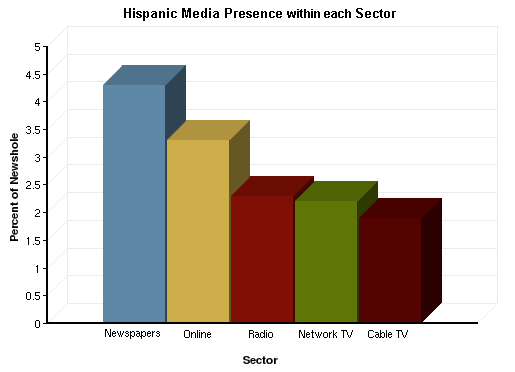 The second-leading newspaper in terms of Hispanic coverage, the New York Times, at 5.7%, offered a greater number and wider variety of front page stories, as well as broader coverage of foreign news.  The Times ran more front-page stories about the Honduras coup, for example, than any other newspaper.

It also often included in-depth pieces that were not about the issues du jour.  A lengthy (3151 words) piece in the April 26 Times told the story of a Queens family whose members’ varying immigrant statuses make even daily life difficult.  Another piece, run on April 16, tells about the impact and implications of massive Chinese investment in Latin American countries.  Stories like this, which are thematic rather than event-driven, make for broader coverage of Latino issues, as well as of news in general.

A few other individual outlets stood out for referencing Hispanics more frequently than most. Liberal radio talk show host Randi Rhodes (7.2% of stories on her program referenced Hispanics) spent a lot of time discussing the Sotomayor nomination.  Indeed, all of her stories that included significant Hispanic mentions were about Sotomayor and the surrounding political debate. Rhodes often drew out particular issues within the Sotomayor storyline that she found to be distasteful or outrageous.  One example is Rhodes’ May 29 show, in which she spoke for nearly 10 minutes about Congressman Tom Tancredo (R-CO) calling the Latino advocacy group National Council on La Raza, of which Sotomayor is a member, “a Latino KKK without the hoods or the nooses.”

Lou Dobbs, who has over the last two years made immigration and immigrant labor signature topics on his show, referenced Hispanics more often on his program, Lou Dobbs Tonight, than did any other cable news show, with Hispanics referenced in 5.6% of all news on his program.

The NewsHour with Jim Lehrer on PBS actually ran fewer stories that prominently mentioned Hispanics than its counterparts, but its stories tended to be longer and more in-depth—whereas even a longer story about immigration on NBC or CBS might last three to five minutes, a package on immigration on NewsHour might run six to seven minutes long, and often be coupled with a lengthy interview.  The April 15 episode of NewsHour, for example, included a package on the new border czar, plus interviews that covered both the current Mexico drug war and “Operation Gatekeeper,” a 1990s U.S. border security operation.  Altogether, nearly ten minutes of this episode were thus devoted to Hispanic issues.  Likewise, the April 17 episode dedicated eleven minutes to U.S.-Cuba relations.

It is worth noting that the preponderance of Hispanic representation in newspaper stories about immigration may in part be due to the proximity of some of our newspaper sources (the San Antonio Express-News and Los Angeles Times, for example) to the U.S.-Mexican border.  Likewise, two of online news sites studied (BBC.com and Reuters.com)  are located in the United Kingdom, likely influencing their perspective on the U.S. immigration debate.