One topic area that people often associate with Hispanics is that of immigration. Hispanics make up a plurality, 47.4%, of U.S. immigrants and are steadily becoming a larger proportion of the U.S. population. 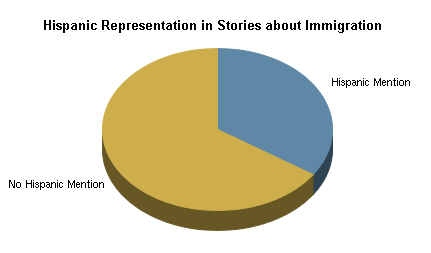 During these six months, no major immigration policy debate or immigration-related events occurred.  Instead, a steady stream of smaller stories, such as administration actions on immigrant labor and illegal border crossings provided a low but consistent level of immigration news.  In this coverage, how closely did the media tie immigration to “Hispanics”?

Judging from our findings, the answer is complicated. While there is not anywhere near a total overlap between Hispanics and the topic of immigration, Hispanics by far were the single group most often referenced in stories about immigration.

While immigration accounted for just 8.4% of the stories that referenced Hispanics, much of that may have to do more with the legislative agenda and other news events during this time than choices made by the press.

Flipping the picture around and looking at all of the coverage about immigration suggests that Hispanics are more closely associated with the issue than other groups. More than a third (34%) of immigration coverage referenced Hispanics. This was more than ten times that of Asians (3.3%) and more than twenty times that of Africans/African Americans (1.5%). There were absolutely no mentions of Muslims within this coverage.
These references came in immigration stories ranging from immigration statistics to labor to crime.  Some told success stories, such as an April 22 story in the San Antonio Express News about students benefiting from a program at 5000 U.S. colleges that gives tuition aid to illegal immigrants.  Others connected Hispanics to immigrant crime, such as the May arrest of illegal Salvadoran immigrant Ingmar Guandique for the killing of Chandra Levy.

The most popular theme, though, was U.S. immigration policy—often triggered by President Obama or another prominent political figure. An August 4 story on NYTimes.com, for example, discussed Obama’s “aggressive strategy for an illegal-immigration crackdown that relies significantly on programs started by his predecessor.” The piece went on to seek the opinions of immigration advocacy groups frustrated with Obama’s stance.  As a representative of the National Council of La Raza told the Times, “Our feelings are mixed at best…We understand the need for sensible enforcement, but that does not mean expanding programs that often led to civil rights violations.”

How does this press treatment comport with the ethnic make-up of the immigrant population?

Comparing coverage to the actual population breakdowns suggests that Hispanic immigrants are proportionally represented, but other immigrant groups, like Asians, might be underrepresented.  According to 2000 census data, 51.7% of the U.S. foreign-born population is from Latin America, 26.4% from Asia, and 2.8% from Africa.