Hispanics are already the largest minority group in the United States—accounting for 47.4 million people or 15.8% of the total population—and that percentage is expected to nearly double by the middle of this century. [1] As their population grows, so does the importance of how they are portrayed in the media. 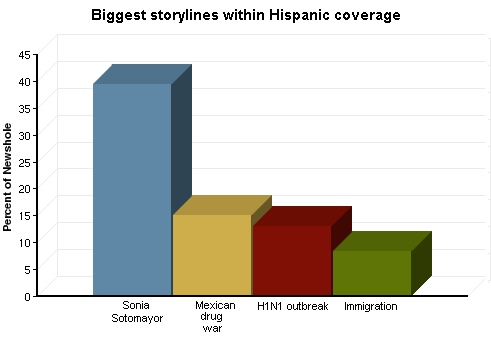 A study of more than 34,000 news stories that appeared in major media outlets finds that most of what the public learns about Hispanics comes not through focused coverage of the life and times of this population group but through event-driven news stories in which Hispanics are one of many elements.

From February 9 to August 9, 2009, only a fraction of stories contained substantial references to Hispanics—just 645 out of 34,452 studied. And only a tiny number, 57 stories, focused directly on the lives of Hispanics in the U.S., according to a media content analysis done jointly by the Project for Excellence in Journalism and the Pew Hispanic Center, both of which are projects of the Pew Research Center.

In the six months studied the biggest news event by far that referenced Hispanics was the nomination and confirmation of Supreme Court Justice Sonia Sotomayor, the first Latino to serve on the high court. More than a third of all the coverage that dealt with Hispanic people or issues was about Sotomayor’s nomination. [2]

Immigration, which from 2006 through 2008 had been heavily debated in Congress and on the political campaign trail, was the subject of fewer than one in ten stories involving Latinos, a reflection of the degree to which the issue largely fell off the radar during the early months of the Obama Administration.

These are some of the central findings of a study that examined coverage of four prominent ethnic, racial and religious groups—Asians, Africans/African-Americans, Hispanics and Muslims—in 55 U.S. news outlets, including 13 newspapers, 15 cable programs, the 7 broadcast network evening and morning news programs, 12 prominent news websites and 9 news radio and talk programs. [3]

2. Our definition of “Hispanics” includes anyone from a Spanish-speaking Latin American country or Spain. It also included people referred to with terms that traditionally apply to Hispanics, such as “Latino/a” or “Chicano/a.”

3. In any given week, our coding universe includes a total of eight radio shows: 3 news programs and 5 talk shows. However, during this six-month period, our lineup of radio talk programs changed as we switched between Randi Rhodes’ program and Stephanie Miller’s show. Both of these programs were a part of this study. (For details, see our News Index Methodology.)

4. Percentages in this report are based on newshole, measured as time on TV and radio and space online or in print. For this analysis we studied a total of 815.62 broadcast hours and 6.9 million words across 34,452 stories.

5. In our coding, “lead newsmaker” refers to a person mentioned in over half of a given news story or segment.

Next: Overall Coverage of Hispanics in the News
← Prev Page
You are reading page1Page2Page3Page4Page5Page6Page7Page8Page9Page10
Next Page →