The swine flu/H1N1 storyline rounded out the top three news events that had explicit and substantial reference to Hispanics. Coverage with those references accounted for 13% of this newshole studied. 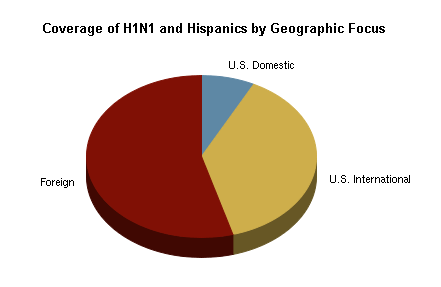 The H1N1 strain of influenza became a cause for global concern in late April, when the virus spread through Mexico and virtually shut down Mexico City. Soon afterwards, foreign tourists who had recently returned from Mexico began to show symptoms of the deadly virus. Around the same time, time, the World Health Organization declared a public health emergency, and fears of cross-border contamination became more common.

While some argued that the U.S. should close the U.S.-Mexico border, others said that the U.S. should do all it could to help its neighbor.  On an April 27 episode of Lou Dobbs Tonight, Dobbs cited the strains swine flu placed on the Mexico public health system and commented, “We have Tamiflu in our public health system, we have masks; why are we not doing both the neighborly thing and the intelligent thing, which is to help out our neighbors?” CNN medical correspondent Sanjay Gupta agreed, saying that a strategy of containment could be a smart move for the U.S.

In a story that spanned the U.S. and Mexico, as well as other countries, where did coverage of Hispanics come in? Was this third-biggest storyline for Hispanic-related news largely tied to the events inside the U.S., outside the U.S., or a mixture or both?

Overall for these six months, the H1N1 accounted for 2.1% of the total national media newshole, as studied in PEJ’s News Coverage Index, making it the ninth most reported story of the period.

And the story was not overwhelmingly tied to Hispanics. References to Hispanics were a part of just 18% of the total coverage of the H1N1 during these six months. When it occurred, generally the focus ranged from the Mexican government’s attempts to contain the disease, comparisons between the severity of U.S. and Mexican outbreaks, to profiles of swine flu victims.

And a good deal of this story was not about the United States. About half of the Hispanic-related stories, 54%, were tied to events in Mexico or other non-U.S. countries.  One of note was the discovery of “boy zero” in late April, Edgar Enrique Hernandez, the five-year-old Mexican boy believed to be the first to contract the disease.  A rash of stories profiling Edgar and his health followed.  “I feel good,” he told the Washington Post on April 28, though his mother, Maria, was less cheerful: “I feel terrible about all of this, because the people are thinking that this was all my son’s fault. I don’t think this is anyone’s fault.”

Another subset of stories dealt with the U.S. in relation to other countries. St. Francis Preparatory School in New York was the source of a rash of swine flu stories when several of its students returned from a trip to Mexico, and nearly 100 St. Francis Prep students subsequently fell ill.  Stories like that of St. Francis fueled travel worries as well as fears of schools becoming hotbeds of swine flu transmission.  (Coverage of the swine flu outbreak among various foreign-language news sources was more closely examined in a May PEJ report.)

Only 7.5% of swine flu news containing Hispanic references dealt solely with the U.S.  These stories tended to be summaries of the U.S. swine flu situation, with only brief mentions of Mexico’s numbers.  A May 4 story in USA Today illustrates this trend: “The H1N1 virus has spread throughout most of the country, and health officials said Sunday that they expect more severe cases and deaths from what’s commonly called swine flu. Doctors at the Centers for Disease Control and Prevention (CDC) expressed caution about the outbreak even as Mexican health officials said that the new flu strain appears to have peaked, with fewer cases overall and fewer people being hospitalized.”

Because of Mexico’s place as the H1N1 pandemic epicenter and the subsequent news frenzy, some grew concerned about the flu being portrayed as a “Mexican problem.”  The New York Times reported on May 4 that “nonstop media coverage of a feared pandemic and the belief that the sometimes fatal virus originated in Mexico” were causing worldwide discrimination against Mexicans: “From Chile, where sports officials declined to host Mexican soccer teams, to China, where the authorities forced even healthy resident Mexicans and Mexican travelers into quarantine, Mexicans say they have been typecast as disease carriers and subjected to humiliating treatment.”

In some cases, news outlets noted that U.S. swine flu cases could be linked to recent travel to Mexico.  Radio talk show host Michael Savage was vocal in linking the swine flu to Hispanics and immigrants, calling for the closing of the U.S.-Mexico border, explaining for his listeners the relationship between immigrants and epidemics.

Indeed, as the H1N1 reemerged this fall, infecting thousands across the U.S., the storyline and the treatment of Hispanics within it bears watching.

Next: Immigration and Hispanics
← Prev Page
Page3Page4Page5Page6Page7You are reading page8Page9Page10Page11Page12Page13
Next Page →