If the numbers show that the decline in mainstream media presence in Washington is really a continuation of a trend that dates back to the mid-1980s, then 2008 will almost certainly be considered a turning point. For these figures do not reflect by and large the cutbacks that befell Washington in the last six to 12 months.

For that, it becomes useful to look at what has happened bureau by bureau.

Consider that during the course of 2008, a host of bureaus—corporate and individual—simply vanished altogether, while others were reduced exponentially. Newhouse Newspapers, Copley and the Copley News Service, Cox (in March of 2009), the (Salt Lake City) Deseret News, the Fairbanks News-Miner, the Portland Press-Herald/Maine Sunday Telegram, the (MA) Lowell Sun and the (Harrisburg, PA) Patriot-News all closed their Washington bureaus in 2008. Among individual newspapers, the Los Angeles Times, Chicago Tribune, Baltimore Sun, Orlando Sentinel and the Ft. Lauderdale Sun-Sentinel all became part of a single Tribune Co., bureau in November, 2008.

Others hang on by a thread. The Stephens Media Group’s Washington bureau, which counted six correspondents as recently as 2006, today has one. Newsday, which had a staff of 15 in Washington when George W. Bush took office in 2001, has just one correspondent today. Business Week, which had 20 staffers three years ago, now has three. 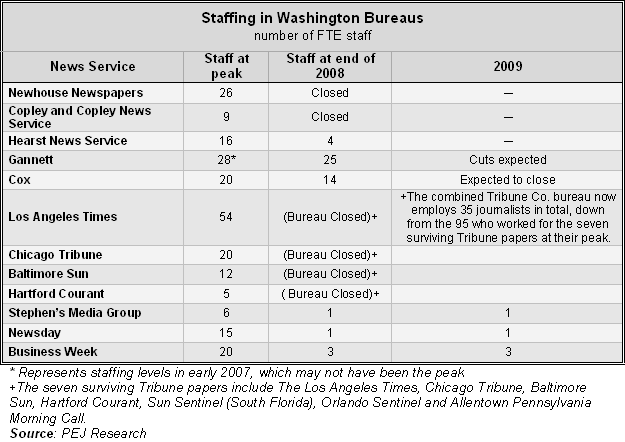 And some have been collapsed in a way that may not reveal the full extent of the reductions. Among the prime examples here is what happened to the Los Angeles Times in 2008. The Times, the largest paper west of the Mississippi once rivaled the New York Times, Washington Post and Wall Street Journal in the breadth of its reporting. As recently as 2004, the Times matched anyone in the size and talent of its Washington bureau with a news staff of 54, including an investigative team of six reporters and its own editor. Today, neither that investigative team nor the L.A. Times Washington bureau still exists. Last November, the one remaining I-team member, together with 17 other Times journalists and editors became part of a joint Tribune Co., Washington bureau.

At their peak, the seven surviving Tribune newspapers with DC staff collectively counted about 110 Washington-based reporters and editors. Today, the combined editorial strength of the bureau that serves seven of those eight papers has about a third of that, 35. (Tribune sold Newsday last spring). About half those work for a “national bureau” filing a general report, while each paper retains one or two correspondents focused on a specific community or region. A couple of others write for the editorial or op-ed pages of either the L.A. Times or the Chicago Tribune. [1]

Among the major U.S. dailies, only the New York Times and the Wall Street Journal have managed to maintain their Washington bureau staffing levels at or near historic highs.

Salt Lake Tribune Correspondent Thomas Burr, the current president of the Regional Reporters Association, which represents smaller papers around the country, says 15 of his members vanished in the months since he took over the organization in July of 2008. That represents roughly 20% of his membership and includes the Deseret News, ending more than six decades of Washington coverage from that paper.

“It seems like just about every time I send out an email [to members], somebody’s address bounces back,” Burr said. “We sometimes joke that we’re becoming an endangered species.”

Sylvia Smith, Washington editor of the Ft. Wayne, Indiana, Journal Gazette, recalled that she was one of 14 Washington-based reporters working for Indiana news outlets when she first arrived in 1989. Today, there are just two—herself and a colleague from the Gannett News Service who provides content to seven of the chain’s dailies in the state. “When the Indiana press corps has a meeting with someone now, it’s a very intimate gathering,” she commented.

1. Of the 35 journalists in the current joint Tribune bureau, 4 work exclusively for the Los Angeles Times, 3 for the Chicago Tribune, 2 for the Baltimore Sun and 1 each for The Hartford Courant, the Orlando Sentinel, the Sun Sentinel (South Florida) and The Morning Call (Allentown, PA). The remaining 22 write mainly for a so-called “family wire” that serves all Tribune Co. newspapers, including the Daily Press (Newport News, Va.)

Next: The Rise of Niche
← Prev Page
Page1Page2You are reading page3Page4Page5Page6Page7Page8
Next Page →